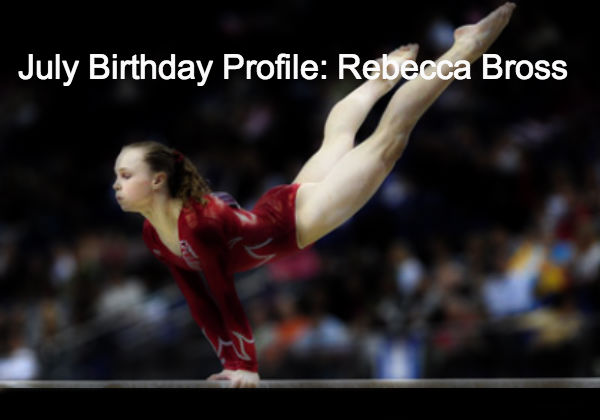 Rebecca made herself known as soon as she embarked on wha was a very successful junior career.

In 2007 she was the youngest member of the PanAmerican Team. She won gold with the team, a silver medal in the all-around and again gold on floor, ahead of future World Champion on Floor, Shawn Johnson.

Later in 2007 she became junior all-around national champion and in 2008 she was named to the Pacific Rim championships where she won, in the junior division, gold in the all-around, vault, beam and floor. She sat out the rest of the year dealing with injuries.

Expectations were high for Bross as she prepared for her senior debut in 2009, she had been a very successful junior and the two previous Olympic all-around champions had come from the gym where she trained, WOGA.  Many wondered if she could be the third in a row to win the title.

In her first senior US Nationals she had struggles on bars and placed third in the all-around. She also won a silver on floor and a bronze on beam.

At Worlds, she qualified first in the all-around, second in bars, was first reserve for the beam final and qualified 8th into the floor final.

Going into her last apparatus during the all-around final she had a wide margin to win the all-around gold, but not wide enough to absorb a fall. Quite unexpectedly Rebecca fell in her last tumbling pass and lost the gold by a 0.050 difference, ceding the gold to the more consistent, experienced Bridget Sloan. In the event finals Rebecca managed a bronze on bars and finished 5th on floor.

In late 2010 she was named to the World Team despite being heavily injured. During the preliminary round she qualified second to the all-around, sixth on bars and second on beam. During the team final she competed three apparatus: bars, beam and floor providing her team with the highest marks on all three pieces.

During the all-around final she fell on her standing Arabian, she fought hard to stay on and is highly remember for fighting till the end not to fall off the beam. She would go on to place third. In the event finals she won bronze on bars and a silver on beam.

At the 2011 Nationals Rebecca placed fourth after the first day of competition however during the second day of competition things went terribly wrong for Rebecca. During the third rotation, vault, she had a bad landing on her DTY resulting in a dislocated knee cap, that shocked everyone on the arena.

Rebecca made a comeback in 2012 competing as a specialist hoping to earn a spot in the Olympic Team. During the 2012 nationals she had a solid performance on bars scoring 15.200 on both days of competition and earning a fourth place finish. But on beam she kept struggling with her dismount, the extremely difficult Patterson, and finished in 13th place.

During the Olympic Trials she struggled on beam during the first day and on bars during the second. She fell off the bars three times before stopping her routine without finishing it. After such a disaster on bars she went on to the beam to perform for the last time in her elite career, fortunately she managed to finish in a high note by landing her Patterson and earning a 14.900 score.

Rebecca Bross having one of the best beam routines of her career at the 2010 Worlds.

Previous So, What Did I Miss?