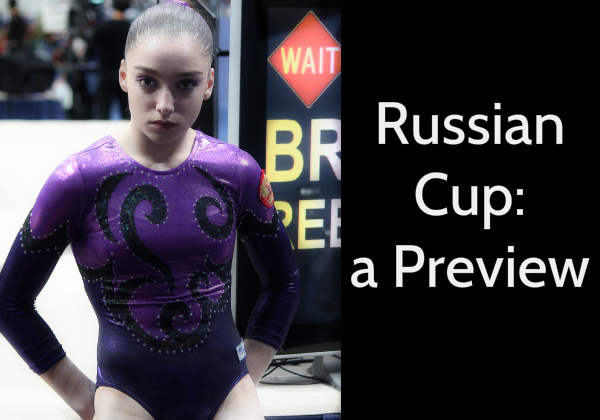 With the annual Russian Cup right around the corner, members of the nationalt eam in Moscow have their eyes turned towards Penza and the possibility of a berth on the 2014 World Championships team. Among them are first-year seniors like Maria Kharenkova and Daria Spiridonova, and tried and true veterans like 2008 Olympian Ekaterina Kramarekno and 2011 World-medalist Tatiana Nabieva.

So far, the narrative coming out of Lake Krugloye sounds similar to the one leading up to the Russian Cup last year, as well as the one dominating the national team’s story since the 2012 Olympics: besides Aliya Mustafina, the leaders of the team are nursing injuries and unable to compete, and the youngsters are not top-level all-rounders, leaving some vulnerable gaps in the team line-up.

All of that continues to sound depressing to fans of Russian gymnastics, but I believe we have good reason to be hopeful for an interesting competition and the World Championships line-up that comes out of it:

First, in the absence of people like Ksenia Afanasyeva, Anastasia Grishina, and Aliya Mustafina (the first two due to recovery and the third because she’s been given a pass and it’s likely she won’t compete), it’s possible that someone will capitalize enormously, surprising us with an improved all-around performance, much like Tatiana Nabieva did last year. Perhaps this will be the year for Alla Sosnitskaya or Maria Kharenkova. The former won second place all-around at the last Russian Championships and the latter has good potential to be a senior all-rounder but hasn’t quite materialized as such on the senior stage.

If she’s itching for a repeat, of course, Tatiana Nabieva could also be in the running, though it’s unlikely given what appears to be a relatively recent return to the national training center.

In good news, she seems to be doing very well, and was kind enough to give us a glimpse of her inside the gym: http://instagram.com/p/q9dJCgPQva/?modal=true

Second, the challenge of incorporating and trusting younger team members with little international competitive experience is diminishing. People like Anna Rodionova and Daria Spiridonova may struggle with performance nerves, but they’re no longer rookies, having earned places not only on internationally- competitive teams but also in event finals. The fear of them completely falling apart in competition should be a thing of the past, as they’ve mostly proven they can be counted on where they perform best. The Russian Cup will be a chance to put all of that experience into practice, proving growth and consistency.

Third, despite lacking international-level all-arounders without the veterans, the national team continues to produce talented specialists. This was clearly on display at the recent European Championships where the young Russians bravely fought for a place on the medal stand in the team competition, clinching ‘only’ the bronze in a territory that usually brings gold or silver, but nevertheless racked up the most individual event medals of any country.

This brings me to a question about strategy: Having recovered from her most recent surgery, Viktoria Komova has claimed that although her bars routine is back in competitive shape, she is unlikely to make the world team because she lacks another event at this point, and the head coaches have made it clear that those vying for a place on the team will need to contribute to at least two events. (Here is a link to the original interview: http://www.allsportinfo.ru/index.php?id=84946)

This is purely speculation, but it seems to me that by enforcing a two-event minimum, the coaches are trying to fix their one-event-specialist ‘problem’ with a little added stimulus: If you don’t have two events, you don’t go to world’s. Hence, Komova will try to present a beam routine at the Russian Cup despite having just begun training it.

While I understand the frustration the federation must be feeling in regards to all- around depth, I question whether enforcing the two-event rule is the way to go right now. The problems in the Team Final at the last European Championships mostly stemmed from shaky performances by gymnasts competing events they weren’t yet ready to perform.

Instead of a Euros repeat, why not take advantage of the six-member maximum and bring the one-event specialists if they can contribute big scores? When Russia won gold at the 2010 World Championships, three of their six members only competed one event (Ksenia Afanasyeva competed on floor, Ksenia Semynova on beam, and Ekaterina Kurbatova on vault), and the event-specialists this time around would likely post higher scores than their 2010 predecessors.

Again, the coaches might be purposefully sacrificing this year with a bigger goal in mind, but that consideration aside, it seems to me that the only good formulation for a medal-contending team leaves room for event specialists. A Komova-Mustafina- Spiridonova trio on bars could be key, for example, as could a Maria Paseka on vault if she’s ready. Bringing the specialists would also take some pressure off of Mustafina, who wouldn’t have to be plugged in everywhere out of sheer necessity.

It’s also possible, of course, that the two-event rule is for training and alternate- purposes only, and that the imagined line-up does include room for single-event specialists. How all of that shakes out will certainly be something I keep my eye on as the competition unfolds in Penza.

In conclusion, it will not only be interesting to see how the specialists continue to hone their skills (I’m particularly excited to see if Daria Spiridonova has increased her start value on uneven bars, possibly by adding another release), how the younger generations grow into their maturity, and who, if anyone, will take the competition by surprise, but it will be equally as interesting to see who is chosen for the world team (or told they’re in the running) by the end of the meet.

If the past reveals anything, it’s that crunching numbers is not the only consideration coming out of the Russian Cup: Merit-earned spots and “benefit-of- the-doubt” spots are also doled out frequently, keeping everyone on their toes, gymnastics-bloggers included!