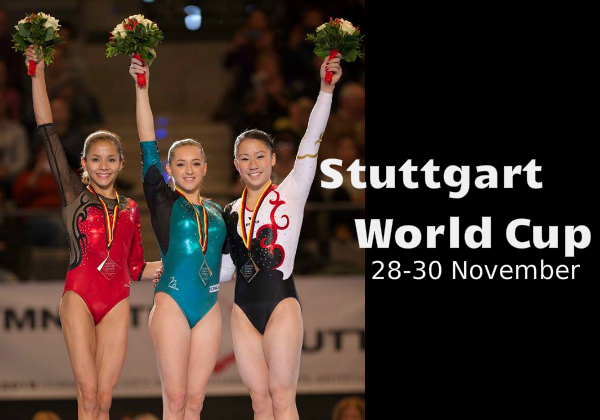 The German organizers continue the tradition of hosting, besides the “official” FIG event, which is the the all around World Cp stage, the first of 4  for WAG and MAG, a side team competition. While the World Cup event takes place without a “preliminary” stage, the team competition had its first installment on Friday, with the women’s qualifications, and the final on Sunday. But more on that a bit later.

The big prize (literally – 15000 CHF) went to Larisa Iordache, of Romania, silver medalist in the all around at the most recent World Championships. She was followed on the podium by Jesica Lopez (Venezuela) and Kim Bui (Germany).

Iordache indeed had one of her top days of competition of 2014. Not to deny the fact that she had competed with much success throughout the year. Still, in the most recent meets of November (Swiss Cup, Arthur Gander) Larisa seemed rather tired and perhaps struggling to regain focus after a demanding Worlds. But on Saturday, Iordache was strong on vault (DTY), kept her breaks to a minimum while maintaining good form throughout on bars, then on beam she hit her difficult set (6.3). On floor she downgraded a little bit (no Silivas to open) but her passes were well controlled while her dance was as engaging as ever.

Jessica Lopez placed 2nd after a very impressive  competition. It is true that she didn’t exactly come out of nowhere (at 28, 8th in the AA at 2014 Worlds), but it was sweet to see her find that right balance and hitting all 4 in the same competition. On vault she hit her DTY, on bars she had one of the more difficult routines of the day, beam was cool and secure showing much maturity even when elements seemed to be slightly off.

Kim Bui of Germany was a somewhat surprising medalist in Stuttgart. But consistency was key on the day and Kim was very focused: DTY, very good quality of execution on bars, strong an controlled on beam. On the last event, floor, she simply enjoyed her last moments in front of the home crowed and the shift of attitude boost the impression she left on the judges.

Vanessa Ferrari placed 4th ; the Italian didn’t have her finest competitions but she still managed to pull one of the best scoring floor routines on the day.

Aliya Mustafina only placed 5th. Many will say that this is the decline of the great Mustafina. I don’t necessarily think this is the case. She started badly her bars (this IS uncharacteristic) and was forced to go off the apparatus, by beam she was already a bit disheartened; when she went off-direction on the standing Arabian a save seemed less likely. On floor she did a whip-whip- triple twist as her first pass – not many will approve of this last element being re-introduced; the rest of the routine went without problems, however. So it was a competition “lost” early on; this not being a major World/Olympic  event, Aliya never quite found the strength to get up there and fight back.

In the AA event, other competitors were: Alla Sosnitskaya who placed 6th , Ellie Black from Canada, placing 7th and Lisa Katarina Hill of Germany on 8th.

Here are a few videos:

In the team event Germany won both the qualifying round on Friday and the final on Sunday, followed by Russia, Switzerland and a 2nd team from Germany.

Germany (1) was composed of Nadja Schulze, Michelle Timm, Pauline Schafer, Sophie Scheder. In a three up two count competition, the duo Schafer-Scheder did wonders for Gemany on bars and beam managing the decisive push against the Russian team. Shafer was brilliant on balance beam hitting her original routine (which also includes an original move, named after) both days. Scheder managed a score in the 15’s on bars, one of the highlights of the team final.

Russia, composed of Polina Fedorova, Ekaterina Kramarenko, Ksenia Afanasieva, placed two points behind the German team. Polina Fedorova and Ekarerina Kramarenko stared with good bars routines but then unexpectedly fell on beam. Ksenia Afanasiefa only competed on vault and floor in the final (also beam in qualifications) and had a good day with a hit DTY (15.00) and a well controlled floor routine (14.033).

The Swiss team composed of Jessica Diacci, Ilaria Kaeslin, Nicole Hitz, Stefanie Siegenthaler placed third, as mentioned above. It was a nervy overall performance from the Swiss girls who showed some really good elements here and there but also lost important points due to falls.

A team from Azerbaijan placed 5th in qualifications. The members of the team were: Marina Nekrasova, Kristina Pravdina, Maria Smirnova.

Here are a few routines to watch:

Ksenia Afanasieva is back! Here is her floor routine (final):

Previous 13: From the Gymnastics Week-end
Next Coupe Avenir: Results & Report