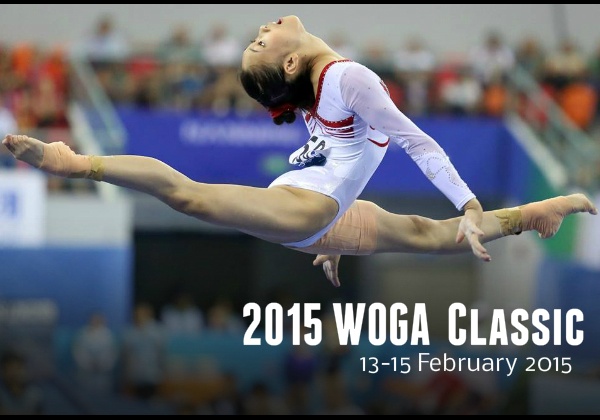 World Olympic Gymnastics Academy (WOGA) is famous for its owners and head coaches, Valerie Liukin and Yevgeny Marchenko, as well as its impressive list of champions, including Nastia Liukin and Carly Patterson. They also organize one of the finer international competitions in the United States every year, held early every season: The WOGA Classic.

The first rotation betrayed some nerves, the most pronounced coming from home girl Alyssa Bauman. After having trouble on her first UB skill and coming off, she counted two more falls before exiting the podium, first on her pak salto and then on her Van Leeuwen. The home crowd might not have been working to her advantage here, and she scratched the rest of the competition.

Others had easier outings. China’s Xie Yufen (Balance Beam bronze medalist at the most recent Chinese Championships) began her competition with an energetic and solid enough floor routine, opening with a full twisting double back. 2014 World Balance Beam silver medalist and teammate Bai Yawen had a similar start, hitting her full-in but going out of bounds, rallying for her  double pike to finish strong. Celine van Gerner  (The Netherlands) also had a nice outing on floor exercise. She opened with a double pike, completed a nice double turn with the leg horizontal, and finished with a high double tuck, well landed. She effused an air of maturity in an opening rotation that saw some rookie mistakes.

Sae Miyakawa began her competition with a lovely set on bars including a piked jaegar and DLO dismount. Welsh gymnast Georgina Hockenhull gave an impressive performance on balance beam for a 14.000. She hit one of the best BHS + BHS + Layout sequences of the night.

Seniors Xie Yufen, Celine van Garner, and Natsumi Sasada continued to execute mostly strong performances into the night, placing 1 through 3 respectively in the senior division. Sasada gave an especially good performance on bars (tkatchev, pak with a half, full twisting double back dismount), showcasing nice form and timing. Yufen came off the beam after her aeriel to sheep jump combination, but she had just stuck her BHS to BHS to Layout sequence and finished up with a double pike dismount. Her bars routine brought in the highest score of the night, a 15.350 (beautiful form, pirouette after pirouette).

Finishing in the top two spots (regardless of division) were junior stand-outs Elena Arenas (USA) and Kagita Nagi (Japan). Arenas finished her competition with an all around total of 55.960, nabbing the title. Her competition high came on vault (FTY, 14.300) and she sealed the deal with all eyes on her, her bar routine being the last of the night (Maloney, Tkatchev, toe-on full to pak salto, beautiful double layout dismount).

Other noteworthy performances came from USA Junior Adriana Popp on balance beam (despite falling, she commanded attention, starting with a wolf spin and attempting a layout with a full); Sae Miyakawa (she ultimately loses on execution and not always having enough steam, but her floor routine is a must-watch: double-double to begin, front layout to double front, full-in, and a double layout to end); and Celine van Gerner, whose balance beam routine I mostly missed but caught just in time to witness a solid double tuck dismount and wide grin as she left the podium. She earned a 14.750 for her routine.

All in all, a good meet; surely a disappointing one for some, but a fulfilling and confidence-boosting one for many others.