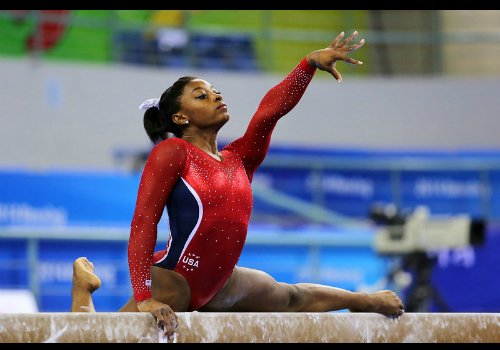 Two years ago, Simone Biles earned the second, highly coveted spot to the AT&T American Cup. I don’t say this irreverently, but she was definitely “the other” in that competition, meaning the other American in a meet that has crowned many an American champion. Competing alongside her was friend and touted compatriot Katelyn Ohashi, fully expected not only to take the title (which she did) but to establish herself as the new kid to beat heading into the 2013-2016 Olympic cycle. Fast-forward to today, and it is Biles who has not only come to fit that bill but who has come to define it in an unprecedented way. Simone was always considered exceptionally talented, but it is been her consistency while performing some of the hardest routines in the world that has already bolded, capitalized, and underlined her name in the world gymnastics archives.

For gym nerds, the two-time U.S. and World Champion’s performance may be nothing more than a confirmation of the obvious; it’s difficult to imagine Simone not winning if she manages to stay on her feet.

For the athlete herself, however, the opportunity to compete in Arlington is probably more significant. According to a recent IG article, the Texas native will count about 160 personal acquaintances among the audience at the massive AT&T Stadium. It’s also a full circle event, bringing her back to where it all began, this time wearing many more accessories.

A recent “At the Ranch” video showcases Simone’s upgrades since October, including a split leap after her Biles pass on floor exercise and a Mustafina dismount on uneven bars. If we’re lucky, she’ll unveil those (and possibly other) upgrades in competition this week, so even if you find yourself sulking about a foregone conclusion and the lack of a real fight, consider the fact that we’ll probably be getting a preview of what’s to come from the world’s top gymnast pretty early in the season. We’ll also most likely be treated to another magnetic performance.

The rest of the field, mostly appearing in order of where they placed all-around in Nanning, will not leave us disappointed.

MyKayla Skinner (USA) did not compete in the All-Around Final at the last world championships due to the two-per-country rule, but she qualified to the event in sixth place. That must have felt pretty vindicating to a gymnast who tends to inspire strong feelings among gym fans, both positive and negative.

Her story is one of setting the bar and then exceeding it. Born in 1996, Skinner was an eligible senior in 2012, but she did not advance to the Olympic Trials. Come 2013, she burst back onto the scene with her now infamous set of skills, including a Cheng vault and a double-twisting double layout floor pass. Steadily climbing the ranks since then, she probably sealed the deal to world team membership with her dominating performance at the Pan American Senior Championships. First considered a dare-devil gymnast with a lot to offer if she could clean up her execution, the powerful Skinner has gone on to improve not only her form but also her reach: on Team USA, she is still mostly a two-event gymnast, but in smaller international events, she is an all-rounder to contend with.

For a peak at her current condition, take a look at her “At the Ranch” video.

Vanessa Ferrari is the next in line and, in my opinion, the next likely to break into the top three at this meet. Winning big at the European Championships in Sofia last May (gold on Floor Exercise), medals have nevertheless evaded her in the last half of the season.

She’s also not a stranger to the American Cup, having placed fifth at the last two gatherings. With a stylish beam routine (I immediately like anyone who still begins a beam routine with a planche) and a floor performance that competes with her youngest rivals, Ferrari has the skill and the stamina to improve on her performance here.

Check out her recent performance in Acacona here.

Delightfully, the next in line is Venezuela’s Jessica Lopez, another athlete proving that age is not only just a number but sometimes an asset! For the die-hard’s, 29-year-old Lopez has been on the radar for a while with a beautiful beam routine (she adapts it frequently but it’s usually something like this: switch split to sissone, bhs to bhs to layout, Johnson, front aerial to wolf jump, free cartwheel, split leap to side somi, full turn, round off to 2.5 twist dismount) and an engaging floor routine, beginning with a whip to triple twist.

The hope has always been that she would make the Balance Beam Final at a World Championship, but so far that goal has eluded her with falls during the qualification round. What she did accomplish last October, however, was a stunning 8th place finish in the All Around Final, closely followed up by a silver-worthy performance at the Stuttgart World Cup in December. Check out her floor routine from that competition here.

It certainly appears that she’s on track for a competitive 2015, beginning with the American Cup.

Next in line is Ellie Black (Canada) and Claudia Fragapane (Great Britain).

2012 Olympian and reigning 2-time Canadian Champion Ellie Black had a successful 2014, ending her year with a 2nd place finish at the Glasgow World Cup. A consistent all-around presence on the international level, her real strengths (and medal-wielding potential) have mostly been showcased in individual event finals, from vault to balance beam to floor exercise. It also should be said that while her uneven bars routine may not be on par with her other events, it’s still thoroughly Ellie, with relatively uncommon skills to boot, including a piked Hindorff and a toe-on front with a half-turn dismount.

Ellie had a rather dominating performance at last year’s Commonwealth Games, placing on all three of her best events. Check out her winning beam routine here.

New sensation Claudia Fragapane is comparable to Black on vault (they duked it out at last year’s Commonwealth Games) and performs one of the most exciting floor routines we’ve seen in the last couple of years. Since turning senior in 2013, her story has been one of making up for lost time (an injury kept her away from most of the 2013 season) and steadily climbing the All-Around ranks. Disappointingly, the floor routines that have wowed audiences in qualification rounds haven’t fared as well when it comes to the pressure-cooker Event Finals, but I have a feeling we’ve only seen the beginning of what Fragapane can do. Her performance under the lights of the AT&T stadium can only be a good experience as she moves forward.

Rounding out the rest of the field are  Erika Fasana (Italy), Natsumi Sasada (Japan), and Emily Little (Australia).

2012 Olympian Erika Fasana worked her way back into competition and into the gym fan’s predictions when she placed 7th in the Floor Exercise Final at the last World Championships, combining dance (Memmel turn included) and powerful, well-executed tumbling (double-twisting double back and DLO).

Sasada, the 2013 and 2014 Japanese National Champion, was left off of the 2012 Olympic Team despite earning a silver medal in the All Around final at the 2012 Japanese Nationals. Her All-Around potential did not serve her well when what was needed was specialists. She’s coming off a good start to the 2015 season, placing third in the All Around at the recent WOGA Classic, as well as first on floor exercise. Check out her bar routine from the WOGA Classic here. I see some nice lines and stalder work.

And finally, 2012 Olympian Emily Little brings the field to a close. with sparse competitive experience since the London Games (her return to international competition was last December at the Mexican Open), I imagine this competition will be important for her as she gets back into competitive shape. She tends to struggle with bars but has been comparable to her rivals on other events in the past. She’s performed some classy DTY’s and beam routines, and gave a dynamic floor routine at the 2012 Olympics, opening with a piked (or laid out) full twisting double back.

Hopefully, after Saturday’s performance, we’ll have a better idea of her intentions heading into the 2015 season. For a peak at her, take a look at this video of her balance beam performance at the Mexican Open here.

A Live Stream will also be available here: http://www.olimpiazzurra.com/2015/03/ginnastica-lamerican-cup-e-in-diretta-streaming-su-olimpiazzurra-sabato-7-marzo/

For those who can’t access the live stream, don’t stress! TCG will provide results and analysis soon after the competition concludes, and will provide links as the performances become available.

Previous Russian Championships: The All Around
Next The List: Best of American Cup