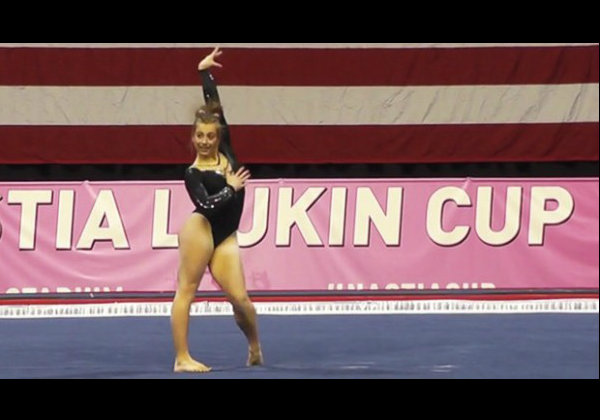 There is something just thoroughly satisfying about a stadium that sits 80,000 people hosting a competition that features athletes in leotards. While gymnastics fans know (quite objectively) that their sport is the best, the rest of the world isn’t there yet. They love tuning in during the Olympics, but they hardly consider that stuff happens in-between The Games. Famous gymnasts begin to get confused with famous figure skaters, and sports that involve balls (no slip here, really) take over the imagination.

So again, how utterly enjoyable to see the imposing AT&T Stadium filled with leos! This massive building is home to the Dallas Cowboys, and it is the fourth largest stadium in the U.S. National Football League. Tonight, it was home to the top Junior Olympic gymnasts in the country as they competed in the 6th annual Nastia Liukin Cup.

The best part about this? Most of these young ladies will never compete internationally. They are level 10 competitors, the last level before Elite, and while the Nastia Liukin Cup can boast of alum that advanced to National Team membership and international fame (Gabby Douglass, McKayla Skinner, and Lexie Priessman to name a few), the majority of these athletes have other goals in mind: continued success in their pre-elite programs and scholarships to universities with the top gymnastics programs. Watching them compete is a potent reminder of U.S. depth and the tough decision that a lot of U.S. gymnasts have to make at a tender age: to go elite or not to go elite.

For those who have decided to forego the elite route, the opportunity to compete at the Nastia Liukin Cup can be the icing on the cake, a reward for those who have won state championship titles and have been asked a billion times at school: So you’re like, going to the Olympics right?

_ _And for those who do go on to compete for Team USA, the opportunity to compete under the bright lights is invaluable. With the Russian Championships underway in Penza this past week and some of the unfortunately nervy performances we’ve seen there, it’s hard not to notice the difference in preparation. The U.S. is able to give their World Class-bound athletes World Class competitive experiences, and it shows later down the road. They are tried and true competitors.

Coming in first place in the junior category (competitors under the age of 16) was Kiya Johnson of Texas Dreams. Kiya began her meet with a nice routine on floor, opening with a double Arabian (a little under-rotated but she saved it), performing an impressive 2.5 twist to punch front, and ending with a solid double tuck. She then punched out a powerful (almost too powerful) FTY before heading to balance beam, where she really set the pace for the rest of the competition with a solid set that included a nailed BHS to LOSO, a switch-split to back tuck, and a round-off to 2.5 dismount. She sealed the deal with a classy bar routine: little bit of form on the bail but a nice toe-on shoot up to HB and oh-so-close to sticking full twisting double back dismount brought the gold medal home safely.

Coming in second was Shaylah Scott of Metroplex Gymnastics. Shayla began her competition on a very high note with a powerful (again, almost too powerful) FTY that brought in a 9. 775. She then went on to impress on bars, performing one of the few stalders (in L grip) we saw in competition, a nicely done jaegar, and a double back dismount. Her beam routine was another highlight, front aerial to BHS and kickover front.

Nabbing the final podium spot was Alexa Al-Hameed of Ames. Her biggest routines were on vault and uneven bars, where she performed an FTY nicely landed and a tkatchev on bars that demanded the attention of anyone on that side of the arena.

In the senior division, Maddie Karr of Twin City Twisters took the top spot with solid all-around routines and one dynamic and perfectly stuck 1.5 yurchenko vault. Other highlights included a big double pike to open her floor routine, a nicely performed geinger release, good form on bars where others struggled (lots of sloppy bails at this meet, but not for Karr) and a free cartwheel to BHS combo, shaking up the standard BHS to LOSO a bit.

Coming in behind Karr was Anna Glenn of Southeastern Gymnastics. Highlights of her solid all-around performance included a beautiful beam routine that didn’t waste any time (she opened almost immediately with a front aerial to bhs to LOSO) and a floor routine that featured Aliya Mustafina’s music from 2013. But without choreography to flatter it, her tumbling had to speak for itself– a BHS to 2.5 and a whip to double. She also posted the highest score on bars, a 9.575.

Finally, rounding out the top three in the senior division was Olivia Karas from IK Gymnastics. Highlights of her performance included a huge 1.5 twisting yurchenko vault, stuck cold for a 9.825 and a dynamic floor routine that opened with a double Arabian. She also executed a very nice bar routine with a Shaposhnikova, pak salto, and toe-on shoot up to HB.

Of course, there were some disappointments. Alicia Boren will have left the arena feeling a bit undone. She posted the highest scores on three events tonight, but an 8. 750 after peeling off on her tkatchev on bars took her out of the medals. Tears in her eyes as she mounted the bar again betrayed her disappointment. I’m sure we’ll enjoy many more performances from her once she’s a Florida Gator.

ALL of the routines from USAG: https://www.youtube.com/playlist?list=PLJBt-Bl-D7natESTui4HhYKdseUwxM9Xi

Previous Russian Championships: Team Final
Next So, What Did I Miss?