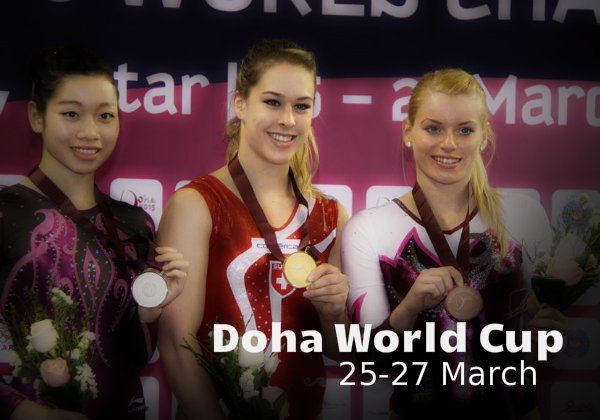 Rising to expectations, Giulia Steingruber of Switzerland took the title in the Vault Final, averaging a score of 14.575. It was good to see the 2-time European Vault Champion back in action after an injury to her ankle at the 2014 Swiss Cup Zurich had us all holding our breath. At this competition, she performed a well executed Rudi (though her chest was pretty low on landing) and an FTY with a small hop, earning the highest execution score of the day on the latter (a 9.050).

Coming in second with an average score of 14.100 was Vietnam’s Thi Ha Thanh Phan. The 2011 vault bronze medalist showcased a DTY and a Rudi, outpacing Steingruber in terms of difficulty, but she wasn’t able to capitalize, getting a weak block off the horse twice, ending both vaults on her knees. My feet empathetically throb.

The Uneven Bars Final was a bit lackluster with no one breaking into the 14’s, but it did offer a few surprises as first-place qualifier Laura Jurca (Romania) finished out of the medals (4th), followed by second-place qualifier Lucia M. F. Perdreau (France). Both were outpaced by teammates who ended up going 1-2:

Youna Dufournet won the event with a score of 13.650 and a 6.0 D value. She looked a little rusty, rushing some of the pirouetting and struggling to get her DLO dismount around, but it’s certainly a celebratory occasion after a bit of a medal-drought following the 2014 French Nationals and a poor showing at the 2015 domestic championship.

Following closely behind her was Diana Bulimar, whose much-anticipated return to international competition after a string of untimely knee injuries made  her a favorite for this competition. Scoring a 13.600 with a 5.3 start value, she placed ahead of Jurca and Perdreau with a lovely routine and superior execution. (Her 8.300 E Score was the highest of the competition.) It’s still not the highest difficulty routine, but what she does she does well.

Rounding out the podium was Switzerland’s Jessica Diacci, with a score of 13.250, and finishing sixth through eighth were South Africa’s Bianca Fallon Mann (12.625) , Switzerland’s Ilaria Kaeslin (11.850), and Portugal’s Ana Filipa Martins (10.750).

Previous So, What Did I Miss?
Next Preview: 2015 British Championships