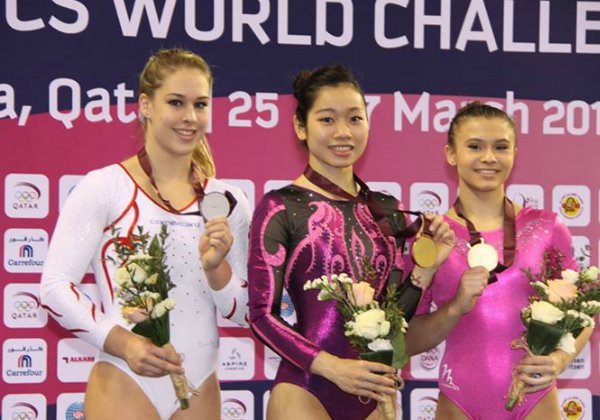 The Doha World Challenge Cup concluded today with the Balance Beam and Floor Exercise Finals, both of which were substantially more pleasing than the first round of finals.

**Thi Ha Thanh Phan **(Vietnam) improved dramatically on her rough (though ultimately silver-yielding) vault performance from Thursday with a lovely beam routine, showing off her second best event. With a  great deal of poise, a solid BHS step-out to layout, graceful recoveries to balance checks, and good connections, she improved on her first-place qualifying score of 14.050, winning the gold with a 14. 250.

Coming in behind Phan was vault archival Giulia Steingruber (Switzerland), who jumped up five places and almost one full point from qualifications to take the silver. A gymnast whose beam work I like more every time I see it, Steingruber gave a gutsy performance on Friday. She lost precious tenths on a big balance check after her punch front and another significant one on her side somi, but she matched Phan’s nailed layout and she worked quickly and stylishly. Her opening sequence is a welcome treat to the “just get up there and get used to the beam before leaving it” mentality.

Nabbing the final podium spot was Diana Bulimar (Romania), whose post-final Instagram hash tag stated: “it’s a bad day not a bad life.” Clearly, the 2013 European Balance Beam silver medalist was left wanting after Doha, but she’s also choosing healthy perspective. With a final score of 14.025, she joined her rivals in improving her qualifications score, a 13.650, but with a big wobble following her single turn, she wasn’t able to improve on her qualification ranking.

Still, this is Bulimar’s first competition back following her knee troubles, and we certainly saw shades of the dynamic and spirited gymnast we’re all used to. Hopefully, once she’s been back in the saddle a bit longer, the nerves will dissipate and she’ll be able to deliver the way she remembers and expects of herself.

In the Floor Exercise Final, Giulia Steingruber capitalized on her first-place qualifying score of 14.300, claiming the title with a 14.550 and establishing herself as the “woman of the meet.” Moving and bounding across the whole floor, she opened with a slightly under rotated laid-out full in, only to come back with a stuck DLO and cleanly landed double tuck and double pike passes, the “easy” passes that were her un-doing during 2014 World Championship qualifications.

Coming in second was Romania’s first-year senior Laura Jurca, who delivered a spritely routine and proved that consistency can be her thing, matching her qualification score of 13.800. Opening with a full-in and shuffling her feet just a bit, she had my attention right from the start, and she kept it throughout the routine.

Overall, Day 2 of this event was (like I said before) much better than the first, both for spectators and athletes, I imagine: not as many breaks, all podium-finishers stayed on their feet, there were some pleasant surprises, and we got to see some world class routines.

Some of the questions I’m leaving with:

-Will Thi Ha Thanh Phan continue her balance beam streak, breaking out of the mostly exclusive vault category we usually imagine her in?

-Will Diana Bulimar and Laura Jurca be able settle those remaining nerves enough to see Romania through some lordache-free days?

-Will Giulia Steingruber manage to harness and maintain the power balance she found on floor exercise, taking it all the way to the 2015 World Championships?

These are just a few. What would you add?