Montpellier Euros Preview: All Around 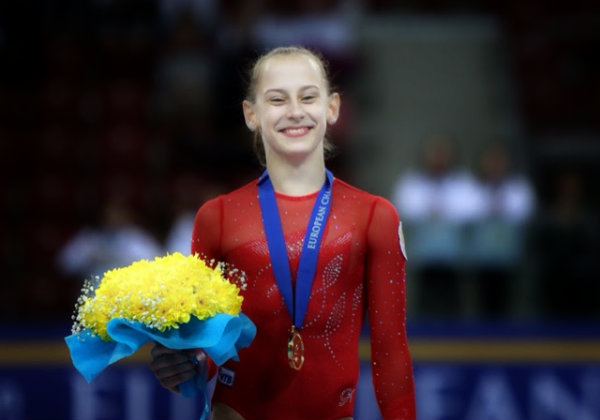 With the European Championships set to kick off this Wednesday, all eyes are on Montpellier, France, and especially on the impending battle for European All Around Champion. Following the announcements that Larisa Iordache and Aliya Mustafina would be sitting this one out, heavy sighs were heard around the gymternet, and understandably: it’s always more satisfying when a regional championship boasts World and Olympic all-around medalists. It also would have been fun and informative to see the match between the reigning European Champion and reigning European silver medalist again, two long years after they battled it out in Moscow.

However, with the absence of the continent’s two leading gymnasts comes a whole new field, and that’s rather exciting. We’ve already seen a competition between Iordache and Mustafina. What we haven’t seen is a competition between those who are “next-best” when the podium is the goal. Without the top ladies hogging the spotlight, we’ll have the chance to see some up-and-coming performers from countries that don’t typically dominate, and we’ll get a sense for how the historically powerful teams stack up without their top all-around athletes.

Without further ado, it looks like this year’s title will be decided by Russia’s Maria Kharenkova and Italy’s Erika Fasana, currently placed 1-2 among the field in this season’s all-around standings.

Historically, Kharenkova has struggled in all-around competition, as she’s more of a beam and (earlier in her career) floor specialist, and without a DTY, she doesn’t have much of a buffer if she misses her bar set, typically a weak event for her. The second-year senior may be on her way to reversing that trend, however. She had a solid showing at the recent Russian Championships where she claimed the all-around title, performing a balance beam routine that received a 15.367, but more significantly improving her bars routine. Her floor work still isn’t as magnetic as it was when she was a junior, the added difficulty being harder for her to manage, but I suspect that as with her much-improved bar work, she’s actively working to find the right balance there as well. She is splendidly atypical for a Russian gymnast of the current generation, performing well where the team runs a deficit and struggling where they’re stronger, but as far as I’m concerned her best claim to fame has been rising to the occasion, wherever and whatever it may be. At last year’s World Championships, she left the qualifications disappointed that a poor beam routine had left her out of the Event Final, but she rallied the next day, hitting the same routine and helping to close the small gap between the Russian and Romanian teams. Additionally, she’s been plugged in elsewhere when the team has most needed her (on floor at the World Championships and on vault at the European Championships, both last year), and with bar work now placing her right in the midst of a strong Russian field, it’s possible she may get that call in a team line-up as well. With the early season absence of Aliya Mustafina and the slow return of Olympic veterans to full fitness, Kharenkova has become an all-around gymnast for her team, a role she’s actively pursued. Speaking with Championat—ROSTOV.RU after her dominating performance in Penza last month, Kharenkova confidently stated: “to tell the truth, I expected this result, because I was well prepared for these competitions.”

This week she’ll have another chance to prove her preparedness, and to continue Russia’s gold-winning streak: Ksenia Semenova, Anna Dementyeva, Aliya Mustafina…Maria Kharenkova?

Next in line for the title is fourth-year senior Erika Fasana, who is quickly becoming a favorite of gymnastics fans after a magnificent start to her 2015 season. Italy has always boasted gymnasts who can add a bit of variety on individual events (especially on the European gymnastics scene), but by steadily climbing the all-around ranks and making a huge statement at the American Cup and City of Jesolo Trophy last month, Fasana has brought the Italian Gymnastics Federation accolades it hasn’t received since Vanessa Ferrari was a major all-around podium threat. Her third place finish at the American Cup made everyone perk up, and her sixth place finish in the midst of a stellar American field in Jesolo sealed the deal: she’s one to watch, and closely. A standard All-Arounder for this level of competition, Fasana competes with a DTY vault and posts respectable, solid scores on two other events (in Jesolo she received a 14.000 on bars and a 14.050 on balance beam, slight improvements from her American Cup scores just weeks before). Added to her steadily improving events is a massive floor routine, where she swaps different passes, including a double twisting double back, a full-in, and a DLO, giving her the edge over her closest rivals. It’s also a routine that keeps improving difficulty and execution-wise. At the World Championships Event Final in Nanning, she posted a 13.800, at the American Cup, a 14.400. At the City of Jesolo Trophy she posted a 14.600 in the All Around Final, in the Event Final, a 14.900. I don’t think she’s reached her plateau yet, and she might even be ready to peak. Might we see that in Montpellier? We’ll soon find out.

Right on the heels of Kharenkova and Fasana is the relatively new Eythora Thorsdottir of the Netherlands. The second-year senior placed first all-around at the recent Sidjik Gymnastics Tournament and is expected to make some waves at this competition. Floor exercise and balance beam are where she shines brightest, her beam work being some of the more unique we’ve seem from anyone in quite a while. She’s somewhat reminiscent of compatriot Sanne Wevers on the event, moving fluidly and decisively in her dance, making the connections look effortless. Her BHS to LOSO is usually solid, as is her very cool Onodi to Illusion turn. And while her floor routine lacks difficulty, she owns every second of it, smiling through her choreography and after each tumbling pass (double pike, triple twist, 2.5 twist) and executing everything cleanly while the crowd snaps along. She’s a gymnast who requires a double-take on a back-handspring (gasp! That was beautiful! What was that?!), so regardless of whether she medals or not (and she very likely could), the exposure in Montpellier will be good for her budding career.

Top-picks for competition upsets include strong performances by first-year senior and reigning British Champion Amy Tinkler; World team member and European Event Finalist Alla Sosnitskaya; Olympic veteran and reigning European Vault Champion Gilulia Steingruber; multiple European medalist and Olympic veteran Diana Bulimar; and 2006 World Champion Vanessa Ferrari. All have placed (in that order) high all-around scores early this season, and all have room for improvement at this competition. If I had to put money on it, I’d say Russia’s Alla Sosnitskaya has the best shot of a podium-finish among the aforementioned. Her all-around difficulty value matches Kharenkova’s, and though she has struggled with inconsistency and execution difficulties in the past, she can post some big scores when she hits. Relatedly, Great Britain’s Claudia Fragapane could also come out on top, though it wouldn’t be so much of an “upset” as it would be a logical next step for an athlete who has struggled so far to match the standard she set for herself last season.