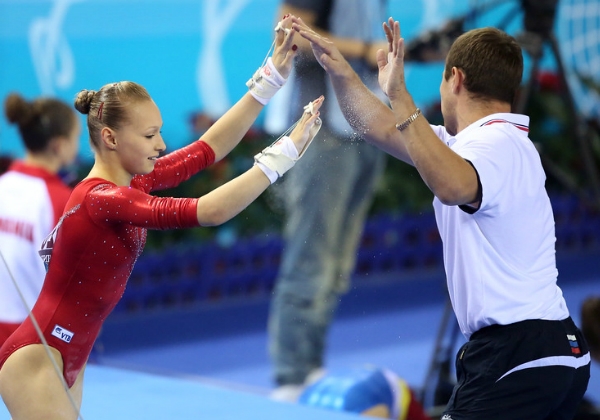 This year’s Uneven Bars Final will most likely be a battle between those who have stood on the podium before. Even without reigning Olympic and World Champions competing, about half of the field is likely to have high difficulty routines, enough to satisfy the gym fan’s hope and desire for a lively meet. That being said, this Final is likely to split right down the middle, with four gymnasts vying for three medals, and the other four aiming for an improved rank and solid showing overall.

Because the relevant D Score rankings do not suggest there are some who’ve simply failed to land their routines this year, my picks for top 8 are quite simply this season’s top eight gymnasts to be competing in Montpellier:

Despite the presence of the defending champion, this competition will be Daria Spiridonova’s to win or lose. Currently ranked not only # 1 in Europe but # 1 in the world, the second year senior will be looking to capitalize on her very positive seasonal debut at the Russian Championships.  Reminiscent of Viktoria Komova in her dominant days, Spiridonova is like butter on this event, swinging with controlled ease, making it all look too simple. She even uses the Komova II transition, which suits her well. She has improved with every major performance she’s given since turning senior, relaxing into a slower rhythm and perhaps shedding some of the pressure that comes with representing her team on their favorite event. This year she has added their typical yet beautiful Pak to Van Leeuwen transition, increasing her start value. With the added difficulty and the (undoubtedly) growing confidence, she’ll find herself on the top of the podium.

Currently ranked fourth among the possible finalists, reigning champion Rebecca Downie will be looking to defend her title and confirm her status. Her dynamic and emotionally charged performance at last year’s European Championships will be difficult to repeat and she’s coming into this competition without the added benefit of a strong start to her season, but her difficulty value is equal to Spiridonova’s (both have a 6.7) and we’ve seen her rally before. With a routine based on the connection of so many different releases and transitions, her mind game and endurance level will be key.

Sweden’s Jonna Adlerteg is the third and final “lock” for this event final if she lands on her feet. The Uneven Bars silver medalist at the 2013 European Championships is coming off good performances at the Cottbus and Ljubljana World Cup events after a lackluster 2014. Her bar work was solid enough before, but with more connections and a toe-on tkatchev, she has added the previously missing “wow-factor” in recent months. If she does what she’s capable of, she should grace the podium.

The big surprise of this year’s Euros is the last-minute addition of Russia’s Maria Paseka, called in to replace an injured Alla Sosnitskaya. Although she’s replacing a gymnast sent for the Vault Final, Paseka will be trying to qualify for bars as well, and ironically, she has a good shot at not only making it but even applying some pressure to the favorites. The whole story is already oddly reminiscent of the 2013 European Championships, when Paseka unexpectedly qualified for the Uneven Bars Final ahead of teammate Anastasia Grishina, bulked on the Event Final she was favorite to win (vault), and minutes later capitalized on her surprise event, walking away with the bronze medal. Her difficultly level won’t be on par with her rivals here, but her technique keeps her in the running and she has a thing for executing bronze-medal performances when they count.

All-Around favorite **Erika Fasana **isn’t  known for her  bar work but she  has made major improvements on this event over the last year, most likely in an effort to stay afloat all-around rather than make a Uneven Bar Final. Clearly, her efforts have paid off in ways she may have not anticipated.

French Uneven Bars Champion Louise Vanhille is another contender. She struggles with form here and there but has a nice look and can post in the solid mid-14’s on this event, as can Ellie Downie, whose strongest events are elsewhere but whose all-around aspirations make her solid here as well.   And last but not least, Italy’s Martina Rizzeli could give a winning performance here. Besides Maria Paseka, I would name her as the most likely to upset the top three contenders. She performs a good Ricna, has some nice stalder work and pirouetting, and with a 6.0 start value, she has an edge.

All in all, the competition will be just that : a real competition. The collective difficulty level won’t be the highest we’ve seen, but the diversity of styles and resumes among the competitors will certainly keep things interesting.

Previous 2015 Euros: Qualifications Results
Next So, What Did I Miss? Euros Edition I