A Chat with Viktoria Komova’s Coach 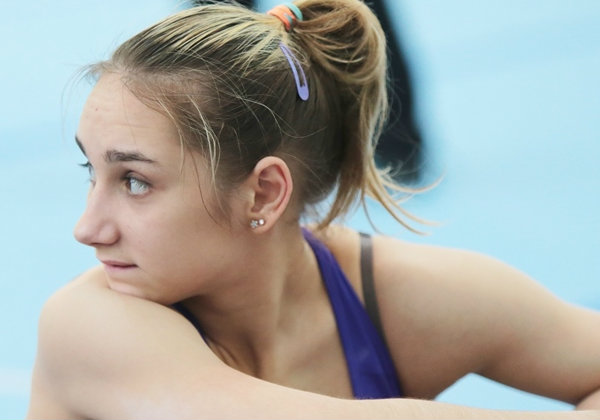 The following interview, with Viktoria Komova’s personal coach, Gennady Elfimov, appeared in Sport-Exress.ru on April 19th. We’ve had the parts that relate directly to Komova translated below, thanks to Katherine Vasetsky-Chamberlin.

Preceding the interview itself, the writer (Elena Vaitsekhovskaya) notes that, at the beginning of the year, “the world of gymnastics was shaken by the news: Komova was going to be leaving her long-time coach Gennady Elfimov. Thankfully, it did not happen.”

In what follows, she talks with Gennady about Komova’s current level of fitness, how she has responded to a string of injuries and illnesses, their commitment to restoring her all-around program, and Gennady’s impressions of the American advantage….

(EV)  I am glad that you renewed your work with Komova and everything is back to normal, so to speak.

(GE)  Let’s not be certain. Although, in my view, it was just a working moment. Children happen to do weird things, even when they are 20. Nothing serious. I did not worry about it.

As a coach you certainly know, what state your pupil should be in a year, before the Olympic games in Rio-de-Janeiro. How far has she to go?

Vika certainly is far from her best state. At the same time, we practically don’t have to change the programs, which were calculated and prepared for the London Olympics. We simply have to restore and polish them.

The first years of Komova’s career were more than successful: she became the world vice-champion, earned absolute Olympic silver. Did she, in your view, perform at her maximum?

What maximum can we talk about, if all medals were silver? Although I always treated those things as a philosopher. If we lost, it means we have something to work on. The earlier success I don’t even think about. That was children’s gymnastics. Toys. Although the basis for adult programs Vika prepared then.

How did Komova react to the changes in her body?

With difficulty. Vika always was a perfectionist. And now everything – the elements, the endurance – went wrong. She tries to put her feet between the bars, and cannot, because the feet grew. She had to change technique, add physical readiness. That’s why there were tears and quarrels, she was nervous.

Looks like, she had to relearn the elements from zero?

No, we simply made some changes. Looked where to improve arms, legs, back, to keep handling own weight, where to lengthen the approach, where to shorten it.

Boris Pilkin did the same in his own time for Svetlana Khorkina.

Boris Vasilievich was a unique coach. The gymnastics in Khorkina’s time did not fit her at all. But they found the solution. I saw it all, and can say that Sveta was very lucky to have such a coach. With Vika it is easier. Her old programs ideally fit the new rules.

As I say, our chains are always with us.

Does Vika suffer from diminished attention ?

Even when there was a lot of attention, I did not notice that Vika liked it. Honestly, she always prefered to be out of the limelight.

Komova is not the first athlete of such high level for you to work with, right?

No. Before, my wife and I coached Svetlana Bakhtina (vice-champion of the world in 1997 in team competition), Kristina Pravdina (participant of the 1997 world championship, now on the Azerbaijan team). Vika came to our group when we were seriously working with Kristina, and we had to divide responsibilities: my wife mostly was at the training camp “Lake Krugloye,” I was with Komova at home in Voronezh.

Did she demand that much attention?

It’s not about her, it’s about me. I think, preparing the gymnast of this level requires individual coaching. Diamonds are not cut on an assembly line.

In other words, your athlete does not need sparring in principle?

Komova has enough sparring in the team

After London Olympics there was much talk that the injuries and sicknesses having happened in the female team during the last two years were the result of too much work stress before the Olympics.

I don’s share this opinion. We did not force the athletes through the preparatory period. If they needed additional rest, they could take the break. And then, the absolutely stupid ankle injury, that Vika suffered after the Games getting out of the car, could not be counted. And then, that unfortunate menengitis, when all the doctors unanimously declared that she would be very fortunate to come back to sports. The head is much more serious than muscles or joints.

Why did you continue to train among all these misfortunes then?

How else? After Vika had overcome the meningitis, the doctors said to do nothing for at least 6 month. Of course, we tried to take all the recommendations into consideration, but we continued to train to move along somehow. In gymnastics, everthing – the skills, the coordination – goes away too fast. Leg injury – another half year was lost. Even after all was healed, I saw that Vika was afraid to step on that foot.

I remember, in London she was thinking about leaving gymnastics altogether.

She simply was very upset about losing. And her resolve “to leave everything” lasted for the whole of 15 minutes.

Now your main task is to prepare your pupil for the world championship in October, right?

We would like to restore all the programs fully for the European festival, which is taking place in June. Whether it will happen or not – that’s a different matter. But these are the plans.

What kinds of exercises you are thinking now?

All-around, of course. That’s the only gymnastics for me, to be honest. Old soviet upbringing, I presume. I was always taught, that the gymnast should be able to perform in all exercises.

Who do you respect the most in this regard?

-Americans. They are all multi-profile, that’s why it is so hard to compete with them. Talking about Vika – her strong side is that although she has preferences, she still can do all-around. She performs there better than in separate finals.

Did you try to understand why?

Maybe, not enough physical strength, maybe it is hard psychologically. All-around is a long stress. You can think of nothing but work. And with separate finals there is a long wait, nervs are literally burning. Although to earn a medal, the combination has to be performed perfectly. And this combination has to be outstanding like vault with the Americans, where they can win even with the falls.

Why, do you think, they have such an advantage?

I think, first of all it is the selection. And the popularity of gymnastics. In the States, in every town there are gymnastics clubs. Three months before the national competitions the tickets are sold out. And we don’t have enough fans. And nobody can say that our coaches are worse than Americans. But in Voronezh, for example, there are no conditions for normal work.

How typical is it for Komova to be influenced by the performance of her competitors, the elements in their combinations?

She never paid attention to that, always thought about her own performance and how to do it best. I don’t think anything will change that now. I am not very interested in what the competiton is going to show as well. What for?