4 Nations: Team and All Around Results 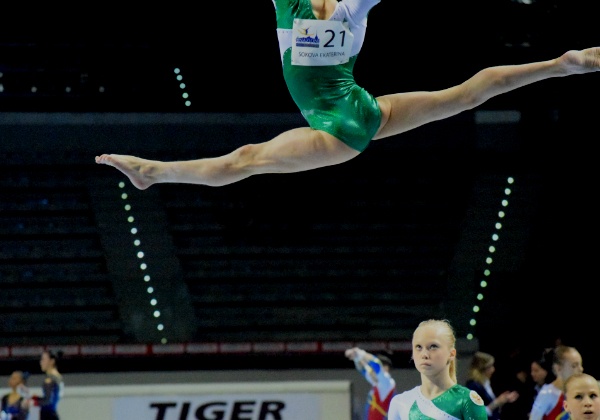 This is just a quick overview of the results of the 4 Nations Cup, between Italy, Russia, Romania and Colombia. Other analyses, pics, videos, will follow soon.

The team competition was won by Russia with 224,850. They started on floor with less difficulty, or less impressive D-scores would be the more correct term, despite hard elements shown here and there by Seda Tutkhalyan, Angelina Melnikova and Anastasia Dimitrieva. They went on to compete on vault where they had two DTYs and one layout Podkopayeva plus two FTYs. Bars was a highlight event, with junior Melnikova getting the highest score of the meet (on the apparatus) with a routine out of 6.3 D. They were the best team on the day on the final event, beam. Here it was Seda Tutkhalyan’s turn to impress, managing to hit a routine out of 6.5 D,  a routine which included the layout full twist.

Italy were second after good uneven bars and solid vaults, but shaky rotations on floor and especially beam. They were the top team on vault on the day.

Romania had a pretty rough meet with falls on all apparatuses. It was noteworthy, however the good bars rotation (they were within .5 of Italy!). On the other hand they lost a lot of ground on vault where they posted only one DTY, by Silvia Zarzu (Laura Jurca also attempted it but she didn’t complete it).

Here are the scores: (click to open in new tab and then click on the image again to enlarge)

You may find the complete results here.

In the all around competition, the Youth Olympics Champ, Seda Tutkhalyan managed to win the top spot. She had a solid meet across the board but also managed to shine on beam and floor. She was followed on the podium by two team mates – junior Angelina Melnikova – amazing on bars, good on vault but heavily deducted on beam and floor-; and by Anastasia Dimitrieva, one of the most artistic gymnasts of the day, especially on beam and floor.

All around results here.

I only managed to watch Colombia on their last rotation, vault. They looked great despite  doing “just” FTYs, they had amplitude, great power and well round.

More to come on this meet so keep close!