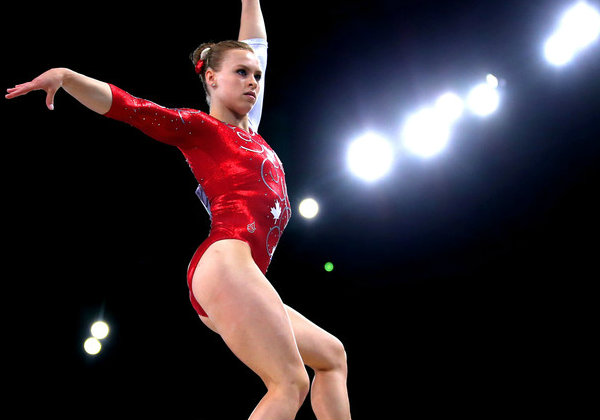 In the absence of many videos and in the shadow of Victoria Moors’ retirement announcement, coverage of this year’s Canadian Championship’s has been a bit patchy.

There is, however, news to share and some conclusions to draw, though Team Canada does seem to be in rebuilding mode.

Fourth-year senior Ellie Black continues to impress all-around, capturing her third consecutive all-around title in Gatineau with a total score of 57.950. Her balance beam score, a 14.800 with a D value of 6.4, was the highlight performance. She really has a unique style on this event. She still seems to be not as confident with the dance elements, but the acrobatics are ambitious and dynamic. It’s big gymnastics.

Following closely behind her was the proficient second-year senior Isabela Onyshko, finishing with an all-around score of 57.550. She is a good all-around match for Black, trailing her on vault but making up for it on bars, and matching her on balance beam and floor exercise, though with a different style. At this competition, her start value on floor was two tenths lower than Black’s, but cleaner execution gave her the edge and she snatched the title. This is good news, not only for Onysko but also for Black and the Canadian Team. Hopefully they can continue to push each other as Rio rolls closer.

Turning senior next year, just in time for the Olympics, Rose-Kaying Woo claimed third place, placing her highest scores on vault (a 5.8 start value, presumably a DTY though I can’t confirm it) and balance beam. She will need to improve her uneven bars if she wants to play with the big girls in 2016, but she certainly proved herself at these championships. Her balance beam routine perfectly revealed this poignant season in her career: a little nervy and hesitant, understandably, but packed with potential. She competed a neat front aerial to free cartwheel, a BHS to layout, a sheep jump, and a switch ring leap. All of the skills were impressive enough but had an “almost there” look to them. What we saw was the genesis of a senior style and a building confidence to execute it.

Without further ado, here’s a collection of routines from the Championships…

Previous Priessman to compete for LSU
Next So, What Did I Miss?