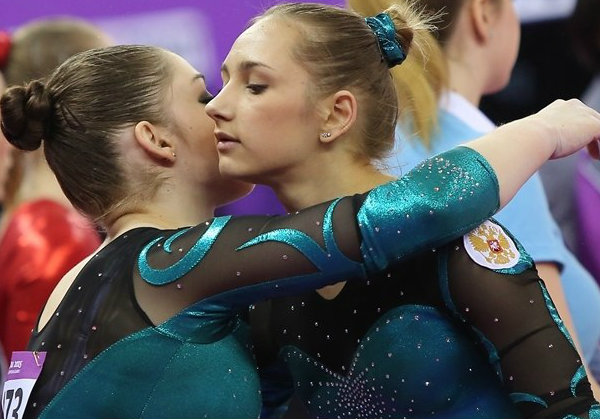 There’s another gymnastics competition underway in Baku this week, one almost as stimulating as the regular meet. It’s the competition between Russian teammates Aliya Mustafina and Viktoria Komova as they try to claim those coveted spots in the event finals over and against one another. If you thought the two-per-country rule made in-team rivalry tight, the European Games are giving us a preview of what a one-per-country rule would look like. The Russian veterans will run this race as they simultaneously try to secure gold for their team (along with first-year senior and rising All-Around talent Seda Tutkhalyan).

This “competition within the competition” has been widely anticipated, coming off the heels of two “comeback’s” of sorts, one much more protracted (Komova) and the other shorter but after a real “come to Jesus” moment following the last World Championships (Mustafina). For both athletes, Baku is a major milestone and a chance to prove they are still Russia’s superstar artistic gymnasts; it’s an opportunity to confirm that all the post-Olympic talk of Russia’s top tier athletes returning in time was accurate. They intend to lead their country into Rio just as they led her into London.

Their participation in Baku is a real treat for fans of Russian gymnastics or really for anyone who’s watched the sport closely for the last few years. Together, Mustafina and Komova infused their country’s program with a much-needed dose of passion; together they led a group of athletes whose style and virtuosity painted shades of the old Soviet standard; together they created a whole new fan base for Russian gymnastics, some corners less scary than others.

And together, they are in Baku under the lights, the first time they’ve performed as part of the same team since the 2012 Olympics.

The negative aspect, of course, is the fact that this strangely formatted competition only allows one gymnast per country into the All Around and Event Finals, and after the first day of competition, my fear has been confirmed that Komova might miss out on the final days not because she isn’t making a successful comeback but because she can’t yet manage to top her teammates. (In the event that this does happen, it remains to be seen whether the coaches take Mustafina (or Tutkhalyan) out of a final to create room for Komova.)

When I covered the 2014 Russian Cup in Penza, I distinctly remember Komova’s gold-yielding performance in the Uneven Bars Final. After struggling with the routine all week, she executed it beautifully when it most counted. It took a few tries on the podium to build the nerve-defying confidence she needed but lacked earlier in the week. I also remember that once Mustafina’s slightly lower score was posted, all but entirely confirming Komova’s win, the champ gave a visible “YES!” with her fist, celebrating with the teammates who were closest to her before quietly embracing the teammate she had just edged out. There was no need to pretend she didn’t know her target.

Komova certainly carried the same honesty into Baku. When reporters asked her shortly before leaving Moscow what her goal was and who her main rivals would be, she replied that a gold medal in the All Around was her goal and said: “probably, I will fight it out with Aliya.”

That fighting spirit is certainly admirable, though admittedly a bit awkward when the same fighting performances count towards the Team Final and unity should be the word of the day.

On the positive side of this format, Aliya Mustafina seems to be benefiting from the in-team competition. If the first day in Baku was long enough to reveal anything, it revealed a gymnast with an improved qualifications mode. It wouldn’t be enough for the veteran to simply stay on her feet this time around; with Komova chasing her again and a team total on the line, she mustered more than we’re accustomed to seeing in the qualifications round. She clearly knew that precious tenths would count as she delivered a considerably cleaner (and stuck) DTY and hit every handstand in her bar routine for a dangerously (and amazingly) long time, sticking the hell out of that dismount as well. I’ve always sensed that Mustafina genuinely wants Komova to achieve all she’s capable of and find satisfaction in her work, but she wasn’t going to make it any easier for her.

Finally, what we’re witnessing between these talented teammates is significant in another way: They’ve always been somewhat out-of-sync with each other—Aliya peaking in 2010 when Viktoria was still a junior, and Viktoria largely believed to be Russia’s best medal contender at the London Olympics with the highest possible difficulty value.

At present, neither are in top form, if you assume they can reach their Olympic (or, for Aliya, pre-Olympic) level again, but neither does there seem to be a significant chasm between them (at least based on vault and bars; we’ll have to see what happens on beam and floor tomorrow). Viktoria certainly didn’t maximize her performances the way Aliya did on this first day of competition, but she’s also dealing with a much longer period away from major competition, and in terms of difficulty, the gymnasts matched each other almost to the tenth. (Viktoria’s bar routine was one-tenth higher than Aliya’s in difficulty value.) They may be more in-sync with each other now than they’ve ever been.

This is good news at this crucial point in the Olympic cycle, almost one year before Rio. The Russian team has lacked serious in-team competition since the London Games, the kind that pushes each athlete to be her absolute best.

With Musafina and Komova debuting again at roughly the same level and younger gymnasts like Seda chasing them with energy and youth, they can use one another as a barometer and inspiration as the training days roll towards Rio.

First, let’s see what they do tomorrow.