PanAm Games: All Around Final 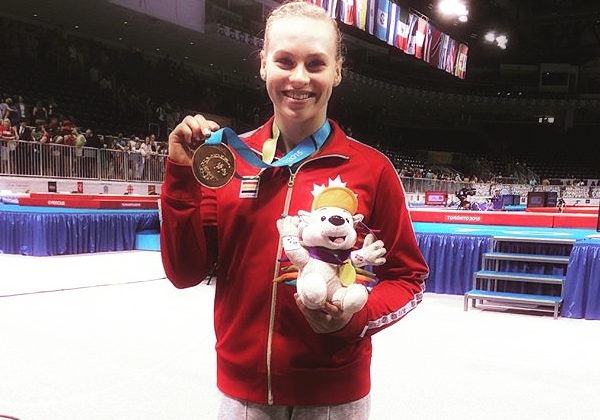 Monday evening’s All Around Final concluded on a high note for the packed arena in Toronto, Ontario. Veteran Ellie Black landed on her feet, greatly improving her Qualifications/Team Final scores, delivering Canada a gold medal in an event traditionally dominated by her southern neighbor.

And she did it in style, climbing further and further in the standings as the competition proceeded: she was fourth after vault, second after uneven bars, and first after a stellar balance beam routine, a placement she maintained after hitting the unique floor exercise that really works when it works.

Certainly “the veteran” among the top six, Black’s experience showed along with her desire to deliver in front of a home crowd. Her final score was a 58.150.

Placing second with a 57.450 was the USA’s Madison Desch. A third-year senior, Desch was the alternate on the 2014 World Championships team. She had a promising junior career but hasn’t quite reached the same success as a senior. One of so many solid All Arounder’s on the U.S. National Team, she was given a great opportunity for some international exposure in Toronto, and she delivered solid, consistent routines. Nerves seem to have gotten the best of her on the balance beam two days in a row, but she still has reason to be proud. There’s something to be said for throwing a layout full on the balance beam after it didn’t work out the first time around.

Nabbing the bronze medal with a 57.050 was Brazil’s spirited first-year senior Flavia Saraeiva. Predictably, she started out lower in the standings following vault, but she held third place steadily for the rest of the competition. Although her floor routine is absolutely delightful (I can’t believe how much air she gets on her full-in and her double tuck), it was tonight’s balance beam routine that highlighted the characteristics that make her such an exciting up-and-coming talent: beautiful extension, swift connections, serious acrobatics. And even though she almost came off on her round-off to layout, losing what was most likely several tenths, it was encouraging to see her fight hard for it. Better to avoid the blunder, but it did enable her to prove her grit.

Finishing in a respectable fourth place was the USA’s Amelia Hundley, a second-year senior trained by MaryLee Tracy at the Cincinnati Gymnastics Academy. First after the first rotation, she fell in standings after the second, counting two big blunders on uneven bars (doubly unfortunate considering the event is usually a strength). Doubtless a disappointment to the All Around top qualifier, she nevertheless rallied on balance beam and floor exercise, counting small mistakes here and there but ultimately giving redemptive performances and keeping the pressure on those fighting for podium placements.

As tonight’s somewhat surprising competition revealed, there’s much, much more to come from Toronto!