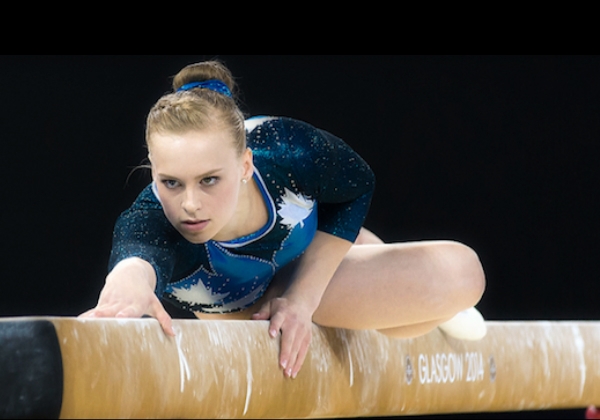 The USA’s Megan Skaggs and Canada’s Viktoria Woo got things rolling on balance beam, both delivering performances that would ultimately earn silver (14.050, Skaggs) and bronze (13.650,Woo) medals following some tough performances from the remaining competitors. Brazil’s Flavia Saraieva came off the beam on her round-off to layout; Venezuela’s Jessica Lopez began with a beautiful BHS TO BHS to layout but came off on her side somi; Guatemala’s Ana Gomez gave a solid performance until the very end, where she missed her foot on her second BHS and (wisely) ditched the dismount; and the USA’s Rachel Gowey came off the beam twice, the first time on her BHS to LOSO to LOSO series and second time on her piked punch front.

It was a disappointing day for some talented beamers.

In the middle of all this, Canada’s Ellie Black offered a dramatic alternative to the theme of the day, absolutely nailing her routine with a total score of 15.050. She still preps for her round-off to layout with a full like she’s second guessing whether to do it, but who the heck cares when she knocks it out of the park? Black was on fire in the All Around Final and she proved it was no fluke in this Balance Beam Final. She not only won the event but she won it a full point ahead of the silver medalist.

On Floor Exericse, Ellie Black picked up another gold medal with a 14.400, ending this magnificent week the way she should have. She has performed this floor routine better, but it was still the exclamation mark she was likely hoping for, capped with a stuck double pike to finish. I hope she scheduled a massage for tomorrow.

The USA’s Amelia Hundley looked thrilled following her solid performance on floor, mounting with a dynamic DLO to immediate split jump, completing a piked full-in, whip to double tuck, and double pike to finish. With a 14.200 she claimed the silver after a long wait as the first to perform.

Nabbing the bronze medal with a 14.150 was Guatemala’s Ana Gomez, who mounted with a pretty tight full-in and ended with a stuck double pike.

The USA’s Madison Desch, top qualifier to this event, wasn’t able to deliver the same performance she gave in qualifications, though the judging did seem a bit harsh to me. She delivered some impressive tumbling but overcooked most of it, most notably landing out of bounds on her opening pass (a whip to Double Arabian).

Puerto Rico’s Paula Melijas and Cuba’s Lediys Perdomo delivered solid, rather unique performances early on, although if Desch’s problem was overcooked passes, Melijas and Perdomo undercooked their passes a bit.

And for the Brazilians, further disappointment, though it must be said they seemed to handle it well. Both Daniele Hypolito and Flavia Saraieva fell on their opening passes.

In conclusion, both the Beam Final and Floor Final could have been more competitive and more exciting to watch given the depth of the field and the numbers posted at qualifications. It would have been a treat to see Sarieva and Gowey build upon their winning performances in the All Around and the Bar Final, and a better performance from Maddie Desch would have gone a lot further in earning her continued place on a stacked U.S. team. It’s always a disappointment when Jessica Lopez peels off the beam, and for me, it’s almost always a surprise.

At the end of the competition, you want to know that those standing on the podium would have been there any other day, and perhaps with the exception of Ellie Black’s exceptional performances, we can’t quite rest in that confirmation after today’s competition. But hey, that’s the sport. It’s part of what makes it so maddening and so exciting at all at the same time.