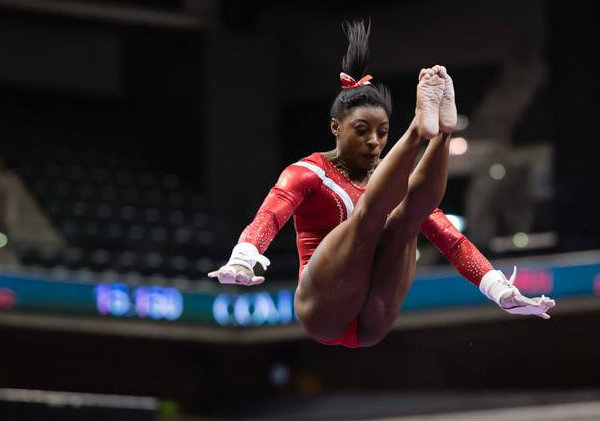 The U.S. Championships wrapped up last Saturday (for the women) and those of you who have been paying even the slightest bit of attention probably know who ended up on the podium. If you’re looking for a refresher, however, here are the results for the seniors, along with the must-see routines….

At the end of the day, these are the routines that I believe “tell the story” of this Championship as it relates to the most immediate next steps: World Championship team selection:

Aly Raisman on Floor Exercise and Vault. As the reigning Olympic Champion, the former is clearly her forte, and she was wise to slightly lower the difficulty after the U.S. Classic; the latter is, well, an Amanar, but the landing scares me to death. I hope Marta takes the same approach as with Kyla in 2012 and asks (tells?) her to take it out. I care more about her knees than a tenth or two.

Gabrielle Douglas on Uneven Bars: Good stalder work on the low bar, awesome piked Tkatchev. The Double-layout dismount will get better (more controlled) with time. This is the event where Gabby consistently scored well and made most of a mark at these Championships. It’s what will keep her in the running for world’s as her all-around score is challenged (and at this competition, passed) by people like Bailie Key and Maggie Nichols.

Kyla Ross on Uneven Bars: Despite the fall on her double front dismount, this routine looked pretty good. She got the Bhardwaj (to which the gymternet collectively exhaled) and executed the routine well. I really like the low bar work here as well (for her a toe-on, to toe-on full to Maloney). There’s something especially fun about taller gymnastics really working the low bar. I looks (and is) a bit risky, so there’s a added element of suspense. Suspense is not something we’re accustomed to with Kyla Ross, but perhaps we’ve turned a page. She has created a lot of suspense, in every sense of the word.

Ashton Locklear and Madison Kocian on Uneven Bars: Both routines are lovely; Madison packs more in and works a great combination (Komova II to pak to Chow 1/2) but I think Ashton has a slight edge on pure aesthetics; each element and section leads to the other effortlessly.

Maggie Nichols on vault and Floor Exercise: The former is where she adds undisputed value to a potential team score at World’s, but the latter is where her personality and well-rounded gymnastics shine.

Mykayla Skinner on vault: She’s still performing a 6.4 SV with one hand, and if it weren’t so scary you’d have to concede that’s it’s brilliant. I want to know what the working arm is made of.

Bailie Key on Uneven Bars: I think this is the event that best highlights Key’s gymnastics and what she adds to the U.S. Team: She’s not Russian or Chinese-smooth but she has a good swing; she takes some risks (I love the stalder-Tkatchev to pak), and she puts up a good fight when things go a bit haywire (highlighted here by her save on the toe-on full). A stuck full twisting double dismount at the end of a big routine reveals her control.

Alyssa Baumann on Balance Beam: it remains to be seen how competitive this beamer can be in the company of beam-solid All-Arounder’s, but this routine is still beautiful. Her only super visible wobble came on her Onodi to wolf jump, and her standing Arabian is almost breathtaking.

Simone Biles on Balance Beam and Floor Exercise: With so many strengths, it’s difficult to know where one should begin praising Simone’s gymnastics. Is it the unbelievably high difficulty? Is it the amazing execution? Is it the sunny attitude through it all? It’s clearly all of that, but I think Simone’s dependability has become just as exemplary as her tumbling, her pointed toes, and and her disposition. Despite the fact that she’s doing the hardest gymnastics on the planet, you trust that she’s going to deliver. She’s like the Soprano in “Climb Every Mountain.” You never doubt that she’ll hit the high note at the end. As a rather nervous fan of gymnastics and musicals, that counts for a heck of a lot in my book.

What are your thoughts? Marta Karolyi has selected 15 women for the World’s training squad, so she clearly envisions more than one possibility for this team. Will she go with the top all-arounders, exclusively? Will specialists get a ticket? What do you think?

Previous The List: Retired Too Soon
Next U.S. Champs: Qualification Results and Highlights