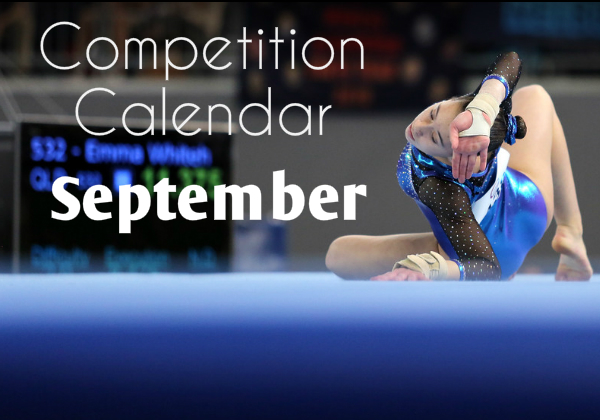 We have been on our toes for months: April had Euros, June had the European Games, July had the PanAms and the EYOF while in August we enjoyed the US Nationals. In September there will be no major continental competition to watch out for but careful planning is required as there are heaps of smaller meets happening at the same time.

Here is a selection of the competitions to watch out for. Look for coverage, videos and news:

Will take place in Stoke-on-Tent, on the 12th of September at the Fenton Manor Sports Complex . The gymnasts get the opportunity to compete on all four events, as part of their local club. A list of participants is not yet available but keep an eye on the official competition website for updates [HERE]

Will take place between the 11th and the 13th of September and will feature a “best of” Italy’s clubs and gymnasts. Giuly explained to us the rules last year, but let’s revisit them:

“the Golden League this year serves a “super final” of the Serie A. The top four teams of this year Serie A are competing again against each other. Last year there were a couple of special rules: – Other 12 top Italian gymnasts, not already part of those 4 teams, were added randomly with a draw to the teams (3 per each). – There’s no limit to the number of gymnasts per team but only 10 can compete on every apparatus – Every team is counting 5 scores per apparatus – This is both a team and individual competition and the top 8 gymnast on every apparatus are competing in the EFs on Sunday – There will be two vault finals, the first being the regular one, with two vaults for each gymnast, and the second one counting just one vault.” Hopefully Giuly will be able to do another enchanting recount of the events, for TCG.

Not many details are widely available, other than the dates (13th-20th of  September) and the location of the competition (Liupanshui). But for previous Chinese internal competitions videos have emerged in due time (thanks piibunina) as well as results (like this wikipedia page with the results of the 2015 National Championships).

Takes place in Ekaterinburg, Russia, between the 16th and the 20th of September. In previous years the competition started with the all around (counting also as a qualifying round), followed by a team competition and event finals. With Russia’s depth increasing, Mustafina might need to demonstrate her readiness here. Komova and Afanasyeva also need to convince that they can keep up with younger team mates like Seda Tutkhalyan, Maria Kharenkova, Evhenya Shelgunova or even Anastasia Dimitrieva.

Osijek (Croatia) is the host of the event taking place between the 17th and the 20th of September. Gymnasts will be competing in qualifications and event finals. A list of participants can be found here http://www.fig-gymnastics.com/site/competition/view?id=12099 – Nominative registration link. With Jade Barbosa, Rebecca Tuney, Ruby Harrold and Noemi Makra leading the women’s field. Official website

Hosted by Griesen between the 19th and the 20th of September. This national championships and pre-worlds trial will show whether Germany has enough depth to cope with the recent unfortunate series of injuries that have side-lined some of their top players (ACL tears for Janas and Bui last spring, Elisabeth Seitz in 2014). Will this team still be able to challenge for a top eight finish in prelims in Glasgow? You may find updates and news here.

This is a junior event which takes place every two years, in Yokohama. This year we can follow it between the 22nd and the 23rd of September. In the midst of so many national trials for Glasgow Worlds, this will perhaps get less attention than it deserves. Gymnast from some top countries will compete all around and in event finals. The US are sending national champion Laurie Hernandez and silver medalist Jazmyn Foberg, while Romania have just announced that they will be sending Izvorani juniors Maria Holbura and Stefania Orzu. Where to follow: on each country’s official federation website: www.romgym.ro , https://usagym.org etc.

Speaking of Romania…  this hasn’t been a great year for Romania. Was it the fact that Larisa didn’t compete, the change of coaches at Izvorani, (and where are Mariana Bitang and Octavian Bellu these days?), could the tide turn for Romania with the qualification to Rio Olympics on the table. All the answers could be provided at Romanian Nationals, between the 25th and the 27th of September, taking place in Bucharest. Where to follow: Fangymnastics, Puzzlegym, Romanian Federation, and of course TCG.

But that is not all. Watch out also for these smaller competition that might not receive much coverage but could, nonetheless prove interesting:

Know more, have a correction to this article, or just want to let us know how excited you are? Please drop us a line, we are grateful for your contribution.

Bonus, as promised in the Facebook caption, here is a picture of WAIS’s Niamh Collins, by Nadia Boyce:

Previous Batumi Tournament: Results
Next The List: Retired Too Soon