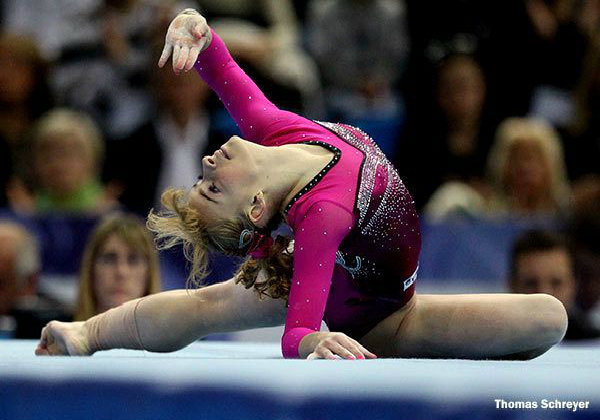 As most have probably seen by now, the news of Anastasia Grishina’s retirement from competitive gymnastics was shared by team manager Valentina Rodienenko last week. Anastasia was kind enough to confirm the news via personal conversation on VK, saying she decided to end her career in sports because of the knee injury (the partial ACL tear sustained at the 2014 Russian Championships). Stating that she went through three surgeries with no significant results, she decided to leave the sport and start a new career as a journalist.

It goes without saying, but Grishina will be deeply missed despite the stubborn shadow that seemed to lurk over her senior career from a disappointing performance at the London Olympics to a major coaching change that elicited disproval from team management. It’s so easy to remember a gymnast’s most publicly painful moments or grieve what feels like an ending come too soon, but I hope Grishina will be remembered for more than the aforementioned and that our recollection of her will be grounded in the beautiful performances she gave, which should be ends in themselves.

My own admiration of Grishina is mostly twofold:

First, she is the quintessential underdog. It was in 2010 that the Russians made a big statement about their turn-around and their readiness for the London Olympics. Aliya Mustafina burst onto the scene as a first-year senior while Viktoria Komova won the Youth Olympic Games, delighting the gymnastics world. But Grishina was there, too, right alongside them, and she was fiercely competitive. Even if the wider gymnastics world didn’t yet realize how talented she was, her teammates most certainly would have. She was more or less in lockstep with them as a junior, and continued to share the podium with them, internationally, as a senior. 2013 was probably her most successful year by many counts with a capstone third place finish in the All Around Final at the European Championships, and she did it in the shadow of mega post-Olympic attention for her more decorated teammates.

Second, Grishina is a gymnast that makes one fall in love with single skills. The composition of her routines were delightful, especially on floor, where her choreography was spirited, but I think it was her execution of each element that made people gawk. From the positioning of spins, to Onodis and illusion turns on beam, to “real” in-bar stalders, to piked jaegers that are actually attractive, Grishina executed textbook gymnastics. It’s a perfectionism that doesn’t always deliver in the end, but it certainly creates some exquisite moments along the way.

What follows is a non-exhaustive playlist of Grishina’s performances over the years. They won’t capture her entire career but they include what I consider to be some of her highlights. Please enjoy…

Grishina as a junior, competing at the 2010 City of Jesolo Trophy where she placed first with her team and first in the All Around. I think it’s fair to say that this is when she popped up on the international radar…

Another routine from 2010, this time from the Junior European Championships in Birmingham, where Grishina finished 1st with the team, 2nd All-Around, 1st on UB and 1st on FX. On Floor Exercise, she had a 5.5 start value compared to a 5.8 for co-champion Larissa Iordache, but superior execution allowed for a tie. In the Uneven Bar Final, impeccable form and a stuck dismount gave her the edge of silver medalist Viktoria Komova….

At the 2012 City of Jesolo Trophy, Grishina competed a much cleaner version of the floor routine that would give her problems in London (albeit with different tumbling)…

And on Balance Beam, she didn’t disappoint, either:

At the 2012 European Championships, competing at her first major international championship as a senior, Grishina helped her team to a second place finish, came in fourth in the balance beam final, and finished a delightful second in the Uneven Bars Final…

In the All Around Final at the 2013 European Championships, Grishina really staked her claim for the podium with this bars routine after completing the first two rotations…

In 2014, Grishina placed third All Around at the Russian Championships in Penza. Her new opening pass (a whip to triple twist) revealed a gymnast still trying to find the right fit, and in the All Around Final, she completed it….