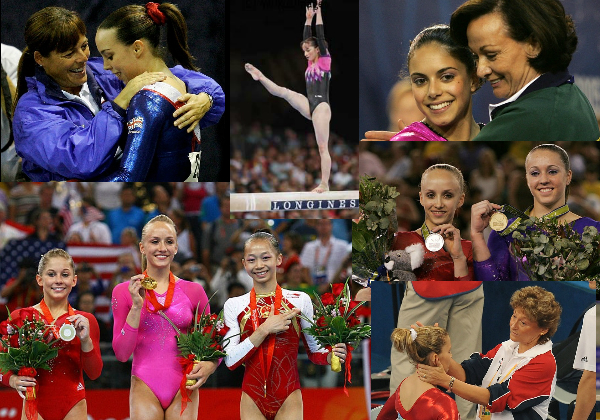 As we get closer to the Rio Olympics, TCG will look back at the previous quad’s most memorable moments. To continue the series, let’s look at the 2005-08 quad.  A new code was put in place, as well as new champions, and the rise of many superstars.

The New Code I would be remiss to discuss this era of gymnastics and not mention the implementation of the new code of points.  Breaking with the traditional capped score of 10.000, the new code would allow for difficulty and execution to be scored on different panels, as well as leaving the difficulty maximum open ended.

The result?  A much more technical approach to judging the sport that overall is good for gymnastics, even if some viewers and broadcasters are still trying to figure out how to accurately assess a good routine.  Having grown up with the 10.000 system, I still struggle to know who is competitive on each event and in the all-around, but I like the new system on principle.

Of course, nothing is perfect, and some fans are still unhappy that someone with a fall can still win the all-around, or that one strong event can obliterate the competition.  My biggest wish is that gymnastics broadcasts would give the scores of a routine with a reference—how does this difficulty value and score match up to the other routines we are watching?

What are your thoughts about the new code?  Pros and cons! And enjoy a ‘new code’ uneven bar montage, made by the incomparable MostepanovaFan:

**Rise of American Dominance ** The United States of America entered this quad with a few feathers in its hat from the 2001-04 span—several world titles (five), world medals (three), Olympic medals (five), plus the All-Around Olympic champion of course!  After a tough 1997-2000 era, the lead up to Athens was a great foundation for American greatness.

Names like Nastia Liukin, Alicia Sacramone, and Chellsie Memmel are still legendary in USA gymnastics.  Even a 2006 Worlds team that dealt with injuries and inexperience still walked away with a silver in team, all-around, vault, bars, and floor.  Then 2007 brought the reign of Shawn Johnson and more medals and titles.

Beijing gave the team a silver and the first one-two finish in the all-around at an Olympics (not to mention four more event final medals).  The current generation of American greats grew up with these gymnasts as their idols, and the training camps and selection procedures were perfected by Marta Karolyi that today produce amazing results. Take a look at Chellsie becoming only the second American to win the world all-around title in 2005.  She won by a mere .001 over Nastia Liukin!

The Emergence of the Australian and Great Britain Teams The landscape of top tier gym programs continued to grow throughout this quad.  First, the Australian team followed up their Sydney Olympics and bronze as a team at the 2003 Worlds with a very consistent and program building push to Beijing.  At the 2005 Worlds, Australia earned its first ever (and still only) all-around medal from Monette Russo, who also qualified for three event finals.

The team finished sixth in 2006, but failed to make team finals in 2007.  Still qualifying a full team to Beijing, the Australians were an impressive fifth place after qualifications, ultimately finishing sixth in the team final.  Daria Joura and Hollie Dykes finished top ten in 2006, and Joura once again was tenth in 2007.  The new young star of Lauren Mitchell helped finish out the quadrennium, and she was ready to take on the world by 2009!

Great Britain, too, showed it’s prowess in establishing itself as a contender for the Big Four.  Of course, their legend Beth Tweddle was continuing her history making ways with first ever world titles, historic all-around finishes (fourth in 2005, behind Russo), and an increasingly complex bar routine that was soon to become the standard.  Her teammates also contributed to their country’s success, reaching the team final in 2007, and Becky Downie finished twelfth in the all-around at the Beijing Olympics.

Also in 2008, both the senior and juniors women’s team finished sixth at the European Championships.  This is the time period where Team GB moves beyond Tweddle’s reputation and the gymnasts started to believe they can play on the world stage. Daria on bars in 2007 (and her signature salute!)–

Interview with a young Becky Downie, who qualified to two event finals at the 2008 Europeans–

Team China’s Historic Victories This quad witnessed two historic feats from Team China that have yet to be repeated—World and Olympic team champions.  Led by perhaps one of the greatest Chinese gymnasts ever, Cheng Fei, the Chinese showed that they were ready for the new code in 2006 by winning the team title.  That team consisted of great veterans like Zhang Nan and Li Ya (even though she did not compete in team finals) and tough newcomers, like Pang Panpan, He Ning, and Zhou Zhorou.

Amazingly, only Cheng Fei was back in Beijing to win the Olympic title, flanked by more newcomers who were not age eligible in 2006.  Yang Yilin, Deng Linlin, Jiang Yuyuan, Li Shanshan, and He Kexin helped bring down the house, as well as bring home an all-around medal and bars title.  Cheng Fei also won bronze on vault and beam, and Yang Yilin secured the bronze on bars.

While questions about the age-eligibility unfortunately still surround the competitors, the consistency and intensity of these gymnasts was a true highlight. Here is the baby of Beijing, Deng Linlin, working beam in team finals.  She goes on to become World and Olympic Champion on this event in the next quad!

**New Nations on the Podium ** As mentioned before, Monette Russo of Australia placed on the podium at Worlds in 2005; that feat was followed by the historic win of Italy’s Vanessa Ferrari as the 2006 World All-Around Champion.  After a very successful junior career, Vanessa played the new code just right and brought life to a program that was always on the fringe—before Ferrari, the highest placing all-arounder at Worlds was Monica Bergamelli, who had a string off top fifteen placements from 1999-2005.  Before Monica, the best finish for an Italian woman was 21st back in 1954 (Luciana Reali).

Vanessa was the only Italian who made the all-around in 2006, but that didn’t stop her from topping the podium, followed by two bronze medals in event finals.  By 2007, Ferrari had grown a bit, but she still did well to finish third, tying with Jade Barbosa from Brazil.  Brazil had been up and coming, ever since a historic 2001 and 2003 Worlds (first medal from Daniele Hypolito, who also finished 4th in the all-around, and first title from Daiane dos Santos).

Additionally, seeing other nations more and more on the podium gave a diversity that the sport had rarely seen before.  In addition to the usual Americans, Chinese, Romanians, and Russians flags, we also saw Uzbekistan, Netherlands, Germany, Great Britain, Canada, North Korea, and France make appearances.  While these weren’t necessarily first ever medals or titles for these nations, it was still a sign of the times to see so many contenders from beyond the ‘Big Four’. Watch the great Jade on beam at the World Cup in 2007 (in possibly the best Brazilian leotard ever?)—

**A New Romania ** After dominating the world competition in the 1990s and back-to-back Olympics team titles in the early 2000s, the Romania program took a hit after legendary coaches Octavian Bellu and Mariana Bitang stepped away from their positions.  The powerhouse team was placed in new hands, and the old intensity and factory-like producing of superstars slowed down.

No doubt, gymnasts like Steliana Nistor and Sandra Izbasa kept Romania competitive, but this quad saw the beginning of the decline that today led to a Romanian team not automatically qualifying for the Olympics.  In 2005, their only world medal came from Athens great Catalina Ponor, who won bronze on beam.  But Ponor was in and out of the lineup during this quad, and 2006 was the first time the Romanians did not win a team medal since 1981.

Romania made its way back onto the podium in both 2007 and 2008, due in part to Russia’s great difficulties (counting a 0 on vault in 2007, and major falls in 2008).  Nonetheless, the scrappy Romanians continued to find a way to develop their legacy, namely through all-around medals (bronze for Izbasa in 2006; silver for Nistor in 2006) and another Olympic title (Izbasa on floor). Nistor at the 2007 Worlds–

Four years is a lot to cover!!  Add your own significant memory and moment from this quad, and watch for the next piece covering the 2001-2004 era as we get closer and closer to Rio!  Tweet me @SuperGymFan with your suggestions!! #MemorableMoments