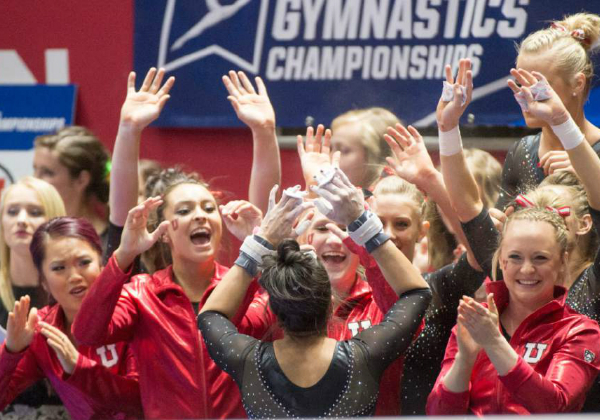 Regional Qualifications have concluded. No team was safe from the pressure and there were some surprising results.

Georgia was the second seeded team and the host of the regional. Both LSU and Georgia easily qualified out of this regional, as expected. Georgia qualified with a 196.850. It wasn’t without a fight on Georgia’s part. Early on, the Gym Dogs suffered a fall from Natalie Vaculik on the beam and then Vivi Babalis earned only a 9.65. Brittany Rogers put Georgia back on track with a solid beam set, with her Omelianchik and full twisting back handspring. Ashlyn Broussard received a 9.9 for a solid beam set and Mary Beth Box anchored with a solid 9.875, allowing Georgia to drop Vaculik’s fall. LSU won the regional with an easy 197.300, the second highest qualifying score of the day from all the regionals.

In a surprising twist of fate, Michigan missed out on qualifying for the NCAA Championships at their home regional by only 0.05. Michigan started their night on beam and it turned out to be their undoing. Olivia Karas suffered a fall in the lead off spot, scoring a 9.125 and then, teammate Lauren Marinez scored only a 9.150, leading Michigan to count a fall. While they came back strong on the other three events, they were not able to make up for the last half a tenth and Auburn was able to overtake them. True to form, Stanford peaked at this regional and won this regional with a 196.525, tying with Auburn. Elizabeth “Ebee” Price took the all-around with a 39.575, scoring a huge 9.975 on bars and another 9.9 on floor exercise.  Not all was lost for Michigan, they qualified Nicole Artz and Briana Brown as individuals in the all-around and Talia Chiarelli on floor.

True to fashion, Oklahoma showed that they are in fact the number one team in the NCAA, easily qualifying out of their regional in the first place spot from that regional and qualifying with the highest team score of 197.575, 1.25 points ahead of second place qualifier, Nebraska. Oklahoma, clearly dominant, did not score below a 9.8 on any event.

As expected, Florida qualified in first out of this regional with a 196.725. The second place qualifier was the host and third seeded Minnesota with a 196.175. Denver, the second seed, only placed fourth, scoring a 195.700. Denver started on beam, and did not have a good beam rotation. They scored a low 48.500, after counting a 9.55 from Katie Menhinick when Claire Hammen scored a 9.525. The team struggled with a slew of 9.7’s. Luckily, Emily Barrett provided some much needed consistency in the anchor spot and scored a solid 9.825. Denver recovered on floor, actually scoring the highest floor total of the whole meet with a 49.250. Florida and BYU had the second highest scores on floor with a 49.075 each. However, bars provided the final nail in the coffin of Denver’s NCAA berth, only scoring a team total of 48.750.

The winner of this regional was, the home team, Alabama with a 197.125. However, it was Cal that made the headlines, the final team to qualify for the NCAA Championships with a 195.925, 0.175 ahead of third place finisher, Boise State. This is Cal’s second team NCAA berth in program history and the first NCAA Berth for the team since 1992.  It was especially meaningful for Cal since the program has been in a rebuilding phase after coaching changes and nearly having the program eliminated. It came down to the final rotation, Cal was on bars and they suffered a fall from Sofie Seilnacht, who only scored an 8.950. Luckily, the team rallied and hit the rest of their routines, capped off with a 9.825, earning Cal a 49.125 and the championship berth.

Utah was the first place qualifier from this regional, coming back after a disappointing performance PAC 12 Championships to win at home with a 197.125. Like at PAC 12’s the Utes started the night on beam. Samantha Partyka lead off beam, her kerfuffle at PAC 12’s a distant memory, she performed a solid beam set and earned a 9.850, to contribute to Utah’s beam total of 49.225. Utah easily outscored all their competitors on all four events, with the exception of floor exercise, where UCLA took the top score of 49.400. Sadiqua Bynum took the top score of the night with a 9.95, with her slinky floor routine and her double back side pass. UCLA qualified second out of this regional with a 196.375. Stealing the spotlight on floor, Lauren Rice of Sacramento State performed at the conclusion of UCLA’s floor rotation, with her spunky faux-hawk and unique floor choreography. On bars, M’Rcy Matsunami of Alaska Anchorage showed huge difficulty on bars, performing her signature skill, the toe on counter kim.

The NCAA Gymnastics Championships will be held in Fort Worth, Texas, April 15-16, 2016.

Previous Cottbus Challenge Cup: Report and Results
Next Bel vs Rou vs Ger: Report and Video