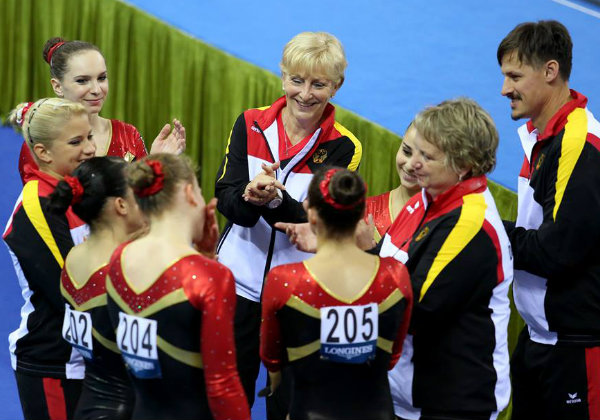 The German team has been decided following the final trial that took place yesterday in Frankfurt. The five team members are:

Sophie Scheder (19) – who would have thought that this tall and lanky uneven bars specialist from 4 years ago will become the top all arounder in Germany’s recent history? 2016 has been her year and a team without Scheder would have been unfathomable. She will hope to qualify for the all around and uneven bars finals:

Elisabeth Seitz (22) – an uneven bars finalist at the 2012 Olympics, Elisabeth has struggled with injury throughout the last quad. She managed to qualify to her second Olympics thanks to her uneven bars routine and her ability to compete well and bring in good scores despite lower difficulty on other three events.

Kim Bui (27) – will be able to contribute with another huge uneven bars score. Bui tore her right ACL in May 2015 and was out of contention for the German team at the 2015 Worlds. Although she was on her way back, she was not selected in the six member team that competed at the Test Event in April. Given Germany’s depth and the fact that she had somewhat similar strengths as some of the locks for the team (Scheder, Seitz), it seemed a very long shot that she would eventually be selected. However, a stellar performance at the 2016 Euros and a strong showing at the Olympic trials secured her place in this team:

Pauline Schaffer (19) is a two times German World team member and a bronze medalist in the beam final at Worlds, in Glasgow 2015.  She is famous for her named-after beam skill, a side somi with half turn.

Tabea Alt (16) – A first year  senior, this is her first major international competition (excluding the Test Event). Alt was a bronze medalist on beam at Junior Europeans in 2014. She doesn’t have weaknesses and she has recently upgraded her beam to a 6.3 difficulty. The team will probably have to count on her on beam and floor, at least in qualifications.