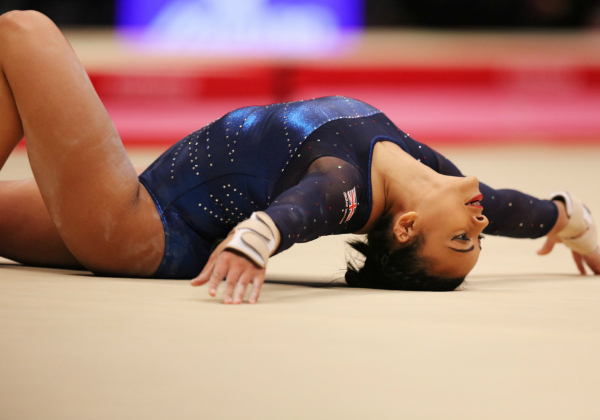 Great Britain has officially announced the team they will be sending to the Rio Olympics.

After many months of training camps, international competition and trials, the gymnasts who have made the cut are: Becky Downie, Ellie Downie, Claudia Fragapane, Amy Tinkler and Ruby Harrold.

This is a very mature and experienced group of gymnasts, all five of which were members of the bronze medal winning world championship team in 2015. Despite their track record of success over the past four years, only one member will be a returning Olympian (Becky is a 2008 Olympian). For four others however, this will be their first time ever competing on an Olympic stage.

Becky will undoubtedly be the captain of the team. She will contribute mostly to the team on bars and beam and possibly vault since she has recently been back training on the apparatus. Becky is a two time European champion on bars, an apparatus where she also holds the Commonwealth title as well and is also a European medalist on beam. Becky is fully expected contend for a medal in the bars final.

Ellie has become one of Britain’s best all-around gymnasts the country has ever produced. Having medaled in the all-around at the European championships and the Youth Olympics, Ellie will be looking to make a name for herself in the all-around competition where she has the potential to place top 8. She also has a chance to make finals on vault and floor, events that won her two silver medals at the European championships this year.

Claudia shot to stardom in the UK after her gold medal haul at the 2014 Commonwealth Games. She is best known for her dynamic and powerful tumbling on floor, an event she can potentially medal on. But Claudia has been making a name for herself as an all-around gymnast as of late, most recently being crowned the British national champion earlier this year. Claudia can also potentially make finals on vault and beam, but it will come down to how she performs in qualifications.

Amy is a very well rounded gymnast. She is able to fill in for the team on any of the four apparatus’ and contribute well to the team total. Amy is best known for her spectacular work on beam and floor but like Ellie and Claudia, she has great potential as an all-around gymnast. Her credentials include being British national champion in 2015 and placing fourth at the American Cup earlier this year.

And last but not least, Ruby. After being named alternate to the Olympic team in 2012, Ruby has come a long way since then. Ruby is best known for her unique and spectacular skills on bars, an event she is a three-time world finalist on and can potentially make the final in Rio. Ruby can also contribute to the team on vault where she has a strong DTY and could fill in on beam and floor if she is needed.

Overall, this is a very strong team. As recent team success tells us, Great Britain is expected to be major contenders to win a team medal in Rio. With the USA expected to take the team title, Great Britain will battle it out with China and Russia for a place on the podium.  All the girls deserve to celebrate today but the hard work doesn’t end here. Bring on Rio!