Madison Kocian, on her way to Rio 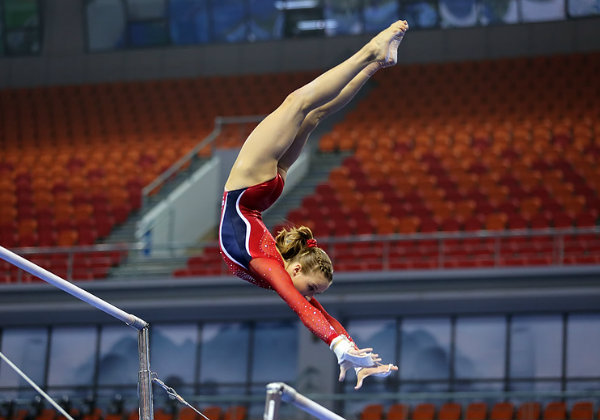 The author of this article is Scott Hill, author of a new gym blog called Double Full Gym Blog

Next time you catch yourself rubbing your temples because of the challenging day you have ahead of you, think of the strength, desire, and sacrifice Madison Kocian is putting into her 7 hours of practice she has today, so that maybe, just maybe, she’ll get a chance to stand on the Olympic podium with the American flag rising in front of her. A typical day for the 19 year old Dallas native consists of waking up at 6:35 a.m. to get ready for the long day that lies ahead of her, getting ready for gymnastics, eating breakfast, and heading out the door by 7:15. Madison typically arrives at the gym around 7:45 and prepares for her first, four hour, practice of the day. After leaving practice around 11:45, Kocian heads home to rest up and get ready for her next practice, which is from 3-6. She will repeat this process for several days per week with one goal in mind… an Olympic gold medal.

Although Madison claims that each day she sets a new goal for herself (which I can assure you is entirely true and is a smart strategy), many gymnastics fans will know that all gymnasts (young or old) all have (pretty much) the same goal… to go to the Olympics. Well, as I’m sure you know, Kocian was named to the American Olympic team just this past weekend. So she can stop training, pack her bags, and head to Rio, right? No. Not right at all. Madison still has plenty of hard work to do.

Already under Madison’s belt is the title of an Olympian. But I’m sure that this isn’t her only goal for the upcoming year. Winning a gold medal in the Olympics is another thing I’m sure that Madison has in the back of her head right now. And the uneven bars is the place for Madison to do it. Even after coming back from many wrist injuries, surgeries, and a broken femur, Kocian has showed recent success on the uneven bars at international competitions such as the 2015 World Championships where she won a gold medal in a four way tie (I know, it’s crazy), as well as a silver at the 2014 Pan Am Games. Not only has she been successful internationally, but also at meets on U.S. soil. Such as, the Olympic trials this year where she won bars (with a HUGE 15.9 on night two), nationals this year where she won silver on bars, and she also won a silver on bars at the Secret U.S. Classic this year. Those are only a few of her recent successes on the uneven bars.

Madison is heading into Rio with lots of weight on her shoulders. But I’m sure this won’t stop her from reaching for her goals. Many would describe Kocian as a determined hard-worker and after following this young lady’s gymnastics for a few years now, I know that a little pressure won’t interfere with Madison’s performance at the games, I am expecting her to perform extremely well, contribute to team USA, contend for a medal in the bars final, and come home with lots of hardware. I wish the best of luck to Madison as she continues her journey on the path to Olympic success!

And here, becoming a world champion:

Previous By The Numbers: Olympic Qualification Prediction
Next Memorable Moments of the Quad: 1993-1996