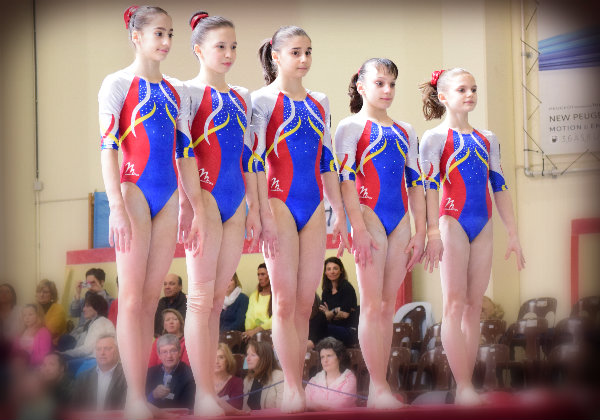 Eight gymnasts competed for the all around title in the Jr 1 category. Two gymnasts, both 2016 Jr European team members, competed only on a few events: Alisia Botnaru skipped vault, while Carmen Ghiciuc only did bars.

Olivia Cimpian won the Junior title with a total of 56.700. Judging by her marks she did a strong FTY on vault, threw the best bars routine of her age category, struggled with her difficult beam routine and was very good on floor.  Cimpian qualified for the vault and floor finals at the 2016 Junior Euros and was a part of the bronze medal winning Romanian Junior team.

On floor, she has a striking style, where her background in rhythmic gymnastics combines with good power to produce difficult tumbling (full in tuck, full in pike) and beautiful leaps and jumps. On beam Olivia can produce equally beautiful and difficult routines but she can be inconsistent. She has a risky routine with interesting combos of leaps, a connection of flic-flac- back tuck full, Y spin. On bars she has nice form, good transitions (toe-on Shaposhnikova, Pak) but she often misses handstands and finds it difficult to maintain rhythm throughout her entire routine. She also looks to have good potential on vault, unfortunately she has been struggling to update her vault to DTY for the past year, unsuccessfully. At the 2016 Euros she decided to throw the DTY on the vault final but she didn’t rotate it fully, crashed and had to scratch the rest of the competition.

This October, Olivia Cimpian also won the titles in the apparatus finals on bars, beam and floor. Here are a few routines from earlier this year:

Laura Iacob (born in 2002) was second in the all around with a total of 56.300. Iacob did an FTY on vault, had a watered down UB routine for a 13.200, hit her beam routine for the highest score in her category (14.600) and tied for highest execution score on floor (9.15, same Andra Anghelescu), but didn’t have the same tumbling difficulty as Cimpian (5.3 to Cimpian’s 5.7). Iacob is known mostly for her floor exercise work, a very dynamic and easy on the eyes tumbler, she also has good difficulty and catchy choreo that she enjoys showcasing. Her beam can be hit or miss, and fortunately in Deva this year she managed to pull it off. The event where I consider that will be her ticket to a World team in 2018 is her uneven bars.  She has good basics, good stretched elbows and good handstands. A couple of injuries have set her back on this event for the past years and she didn’t make the Junior team for 2016 Euros but if she continues to improve and can work consistently in the next two years she promises to become one to watch for Romania. Iacob also won apparatus medals on beam and floor.

Here is Iacob on bars in June:

And this is her floor routine:

Ioana Crisan (b 2001) placed third all around, with a 56.15. Her favorite apparatus is beam where she can throw huge difficulty, over 6.0 with combos like backward roll to handstand- flic flac – layout stepout and flic- back handspring – layout to two feet. This routine could be her ticket to the senior team at next year individual Europeans and Worlds.  In a team competition scenario she can also contribute on floor where she can produce good difficulty tumbling (full in pike and tuck), nice tall leans and jumps and shows a lot of personality in her dance. Crisan also won medals on vault, bars and beam.

Denisa Golgota (b in 2002) placed 4th with a 55.900. She demonstrated that she remains the best vaulter in Romania (among the juniors at least) and can also put in a good case for the best floor routine as well. Her DTY brought her the highest score of the competition with a 15.150. While on floor in the all around she tied Cimpian’s score of 14.800. Denisa Golgota, who was a silver medalist on vault at the 2016 Junior Euros and a gold medalist on floor, won the vault title and the floor silver medal at the junior competition  last weekend in Deva.

The other gymnasts that placed in the all around were: Alexandra Mihai, Denisa Florea, Andra Anghelescu and Ariadna Stanciu.

In the for Juniors II level 3 competition, Miruna Cazan was the star of the day, winning with a total of 52.975. Miruna is only 10 years old and she trains at Dinamo Bucharest under head coach Dan Potra and she was inspired to start gymnastics after watch the 2012 Olympics on TV. She says her favorite apparatus is beam because she feels “she is floating”. Luiza Popa from CS Farul Constanta, member of the Junior national team (coaches Raluca Bugner and Ioana Grava, Florin Uzum, Ramona Micu, Marius Vintilă. ) placed 2nd, Luiza had the highest scores of the competition on beam and floor but has a mini disaster on bars, totalling 52.025 points. She is a very clean gymnasts, with good basics. Cristina Vesa from Arad (coached by Carina Franiov & Ciprian Hegyi), born in 2005, placed 3rd with a total of 52.00.

In the Juniors II level 4  competition, Camelia Anghel (b 2003) from Steaua Bucharest won with a 55.0. Her score was boosted by an FTY vault and solid routines on beam and floor giving her scores over 14.0. Ioana Stanciulescu (b 2004), originally from Constanta, was second in the all around competition and won the bars and floor event finals. Iulia Berar (b 2003), originally from Arad, placed 3rd in the all around competition, but presented one of the highlight bars routines of the competition (13.4/5.7). The three gymnasts are members of the Junior national team. Anghel and Stanciulescu train with the “big” team under Forminte and coaches Liliana Cosma, Remus Nicolai, Daniela Nicolai, Florin Cotutiu, Adela Popa while Berar trains under Raluca Bugner and Ioana Grava, Florin Uzum, Ramona Micu, Marius Vintilă.

Overall, the situation of the Romanian team doesn’t seem to have changed much: vault is an event with a lot of issues where five-six individuals can produce decent FTYs and the only bright star is Denisa Golgota that has a reliable DTY and potential for even more difficulty. Beam and floor are solid but the stand out routines of Crisan and Cimpian continue to be highly inconsistent. Floor is the event with the best overall difficulty and highest level of competition. Still, one cannot be overly optimistic comparing to the level of the international field, as the highest difficulty elements presented in Deva were Es. Bars still needs a lot of work . The goal for Romania is to return around the 40.5-41.0 mark total in 2018. Counting the best 3 scores in the final, from Cimpian, Crisan and Ghiciuc, they seem to be on track, but without the home scoring advantage, would they have returned to the 12.966s  across the board that they received last spring in Bern?

However, these 4-6 gymnasts (Golgota, Cimpian, Crisan, Iacob, and perhaps Chiciuc and Botnaru), together with Laura Jurca, Maria Holbura, Diana Bulimar (if she sticks around) will give Larisa Iordache five companions to form a decent team for Romania come 2018. For 2017 Euros, the top event specialists seem to be Iordache, Ponor (if she will find herself a training situation that works for her), Cimpian and Crisan. Holbura or Jurca and have good chances to make it if they stick around and are in good shape at the moment of the competition.