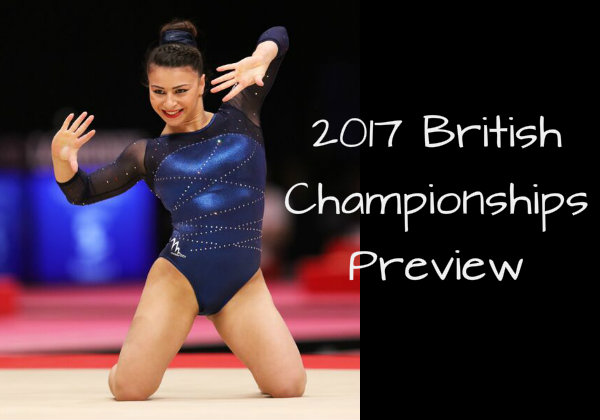 The glories of the last quad will be one for British Gymnastics to remember and of which they hope to carry into the new Olympic cycle.  For the British team, that cycle officially starts this weekend at the British championships, Friday 24th to Sunday 26th March.

These girls must put those memories of the last quad, good or bad, to one side now and look towards the next four years leading up to Tokyo 2020. Following their historic achievements in Rio, we can perhaps expect even greater things from the British women in the run up to Tokyo.

In the senior competition, we have four returning Olympians from Rio. Claudia Fragapane, who is said to have transformed her gymnastics completely following her experience on BBC’s Strictly Come Dancing, is holding the current national AA title and hopes to defend that this week.

Challenging her for that title, Amy Tinkler, who won the bronze medal on floor in Rio, will be looking to regain the senior AA title she won in 2015. Also Ellie Downie, who is yet to win a national AA title, hopes that 2017 will be her year to do just that.

Bars and beam specialist Becky Downie will be looking to make a good return to competition after missing out on the bar final in Rio, an event she was expected to challenge for a medal on.

Another Olympian expected to return to competition this weekend is Rebecca Tunney. The 2012 Olympian is hoping to make up for lost time after dealing with injuries for most of the last quad.

Now Olympians aside, we can also expect to see the return of Charlie Fellows, Georgina Hockenhull, Kelly Simm, Georgia-Mae Fenton and Tyesha Mattis.

The biggest comeback we will see this weekend is of Nicole Hibbert, who is making a big return from retirement. Nicole was the member of the silver medal winning British team at the 2010 European Championships, the first time the British women ever medalled in the event. She also represented Great Britain at the 2010 World Championships in Rotterdam, The Netherlands.

But where there are veterans then comes newcomers, and we will see plenty of those this weekend. The biggest name to look out for is Alice Kinsella, who won three silver medals at last years junior European Championships. Other names to look out for include Maisie Methuen, Lucy Stanhope, Ellese Oates, Megan Parker, Latalia Bevan and Amelia Montague.

Where the senior field is packed with talent, the junior competition is no exception. Keep your eye out for Amelie Morgan, who is a first year junior and last year won a silver medal in the AA at the Olympic Hopes Cup in November, scoring 55.100. It’s worth mentioning that with the exception of Alice Kinsella, Morgan had scored higher in the AA than any other junior in 2016 when she was only an espoir.

More gymnasts to look out for includes 2016 junior floor champion Zoe Simmons and 2015 Espoir AA champion Jolie Ruckley who is coming back from injury.

Others who are expected to get good results this weekend includes Amelia Knight, Mia Scott, Chiara Bunce and Megan Splain.

British Gymnastics always does an excellent job providing coverage for the British Championships, where they will be live streaming the second subdivision of the senior AA on Saturday and also the apparatus finals on Sunday.

The apparatus finals will also be broadcasted on the BBC Sport Website (UK Only).

British gymnastics will also be providing coverage of other competitions via their live individual apparatus cameras.

You can download the official program for the event here.