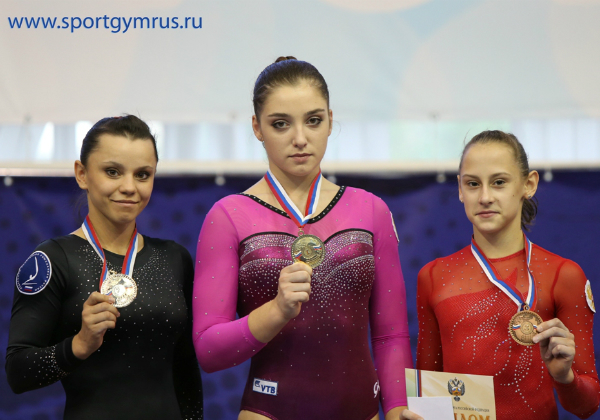 On balance beam, she had more balance checks than previous days and didn’t make all of her connections, but she landed the standing Arabian for the third time in a row, and stuck her double tuck dismount for 15.567 and 6.6 D score. I know I might get hammered for saying this, but Aliya’s massive execution scores on home soil have a lot to do with making mess-ups look good. When you gracefully stumble out of elements and even make them looked planned, you make it easy for the judges to give you the benefit of the doubt. (Was a 3 tenth or 1 tenth balance check? Oh, let’s just say 1. It was really very pretty.) It’s an art Maria Kharenkova hasn’t mastered yet, and she would do well to.

A big balance check after her acrobatic series and a relatively nervy performance meant Kharenkova had to settle for silver on her pet event, hampered more by execution than by her closest rival’s only slightly higher D score.

I enjoyed watching Kharenkova before, but I’ve especially warmed to her over these last days in Penza. She doesn’t fit a mold, Russian or otherwise, generally privileging strong acrobatics over execution. At the same time, she can’t quite garner enough strength for a DTY vault (limiting her all-around potential) and although not especially graceful, she is quite precise, especially in practice. Her style in training and in competition is a breath of fresh air, aided by her happy demeanor. She works very hard and consistently, but missed elements here and there don’t seem to rattle her. She takes everything in stride.

Coming in third was Daria Spiridonova, finally finishing in the top three on an event she’ll likely be pegged for in Nanning if Komova can’t get a routine ready. She has a nice look here, reminiscent of her stronger event: delicate, limber, mostly at ease except for doubting herself at key connections (her Onodi to front aerial, for example).

The only nail-biter is her dismount, which she frequently either under or over-rotates. Landing on her backside is one thing, but the overcorrection is worse (at least in terms of safety and the comfort of the observers) when she lunges towards the beam upon her feet hitting the floor. I’m sure she’ll be giving her exit extra attention in the next few weeks.

The Floor Exercise Final proved a bit more interesting, if only because it is a worrisome event for Russia on the international stage. Today’s competition unfortunately confirmed that concern.

Aliya Mustafina took the title with a spirited routine that, like her gold-earning beam routine in 2013, amusingly strokes the code of points, making it work for her present strengths and weaknesses. She added the stag jump out of a stuck double Arabian today, performing it well enough although the rebound wasn’t as seamless as usual, and she completed her Memmel and Triple Y turns. The Gomez is still a work in progress, but I think it could be ready (as in consistent during competition) by October. She earned a 14.700 with a 5.7 D score.

In general, I like this routine more than I thought I would when she unveiled it earlier this season, and I’m conflicted about whether she should upgrade it with a harder tumbling pass. If she could do so without unveiling a triple twist, then that would be fabulous. It’s an ultimately more tidy routine without that pass, however, and probably safer on the knees and ankles, so if that’s the only alternative, I say leave it out. The impression left without the helicopter twisters and with beautifully executed spins is a better one.

Taking the second prize and proving that this competition wasn’t all about World’s team selection was Tula’s Daria Yelizarova (2.5 to full twist, triple twist, double pike), and coming in third was the exhaustion-defying Maria Kharenkova, who climbed over poorly executed routines from Maria Paseka and Alla Sosnitskaya with four imperfect but solid-enough passes: double Arabian, 2.5 twist to two handsprings to double pike, whip to whip to handspring to triple twist, double tuck.

Without solid routines leaving little doubt as to whether they can deliver on Russia’s weaker events in Nanning, I imagine Alla Sosnitskaya and Maria Paseka will be hard at work at Lake Krugloye in September. Sosnitskaya has a gutsier routine on floor, but with exception of the Vault Final yesterday, Paseka was more consistent across the board on her two most important pieces. While Alla looked stronger as the competition proceeded from day to day, Maria was far fresher in the beginning of the week. Her big issue appears to be stamina over the long haul, as opposed to taking a while to warm up to a podium.

There is more to say in regards to selection for Nanning, performance themes, celebrations and concerns, but for now, this Russian Cup is a wrap!