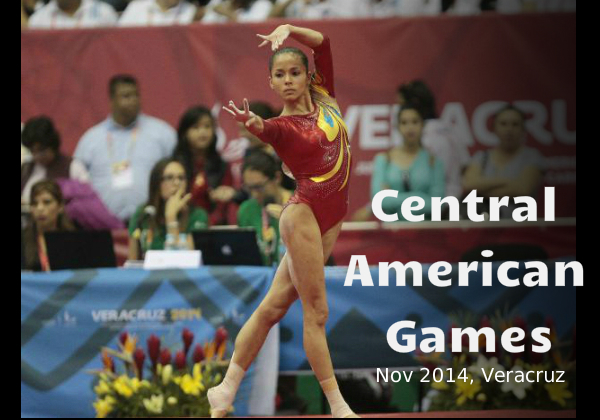 The Central American Games have just ended in Veracruz, México.

For the team competition, the Mexican team (also host to the meet) defended their title from four years ago earning a narrow victory over a strong Cuban team (159.395 – 159.028). Colombia finished 3rd while Venezuela was fourth. Only these four countries presented full teams.

Individually, Jessica López defended her title as all-around champion from four years ago, followed by Elsa García from Mexico and Yessenia Ferrara from Cuba.

In the apparatus finals Yessenia Ferrara and Jessica López collected two golds each. Yessenia won vault with difficulty marks of 6.0 and 6.2. Dovelis Torres also from Cuba followed her with silver and Nicolle Vázquez from Puerto Rico won the bronze.

In the uneven bars Jessica López won with the highest difficulty value of all the competitors a 6.0, her final score being a 14.100. The Guatemalan Ana Sofia Gómez Porras (who has a Romanian coach) and who originally qualified last to the final took silver with a 5.7 difficulty and a 13.500 final score. Bibiana Velez from Colombia took third. (5.6, 7.750 = 13.350).

Jessica López was golden again on the beam with a 14.250. Ana Lago, who had qualified last to the final, jumped to second place with a 13.850 and Yessenia Ferrara took third with a 13.525. Ana Sofia Gómez Porras who had the highest difficulty mark with a 6.1 struggled and finished fourth.

The only videos I have managed to find from the meet are from Elsa García: