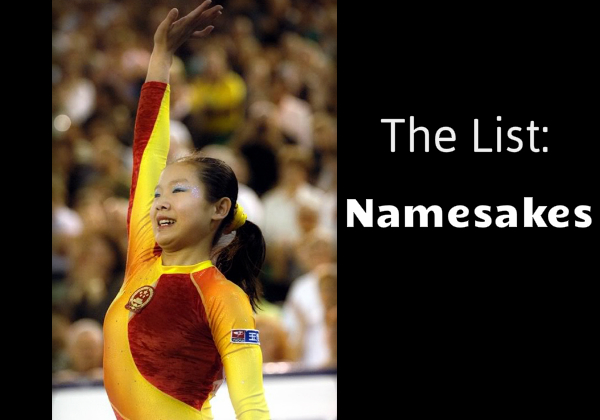 One accomplishment that a gymnast can achieve (beyond the medals and titles, of course) is having a skill named them in the Code of Points. Many skills are called by their namesake—Yurchenko vault, Tkatchev release. Some may be arguably misnamed (a gymnast must perform the skill successfully at a Worlds or Olympics and apply to have the skill named for them), but nonetheless, we delight in the contributions the gymnast provides the sport. After all, isn’t that one of the greatest things about gymnastics? It is ever-evolving, and gymnasts keep pushing the boundaries, challenging what we think is possible. Below is a list of some of my favorite namesake skills!

Named after vaulting great and three time Olympic champion Simona Amanar of Romania. Though Elena Zamolodchikova preformed this vault and was planning to use at the Sydney Olympics, Zamo kept to her double twisting Yurchenko to win the vault gold in 2000. As defending Olympic champion on the event, Simona went for broke and performed the two and a half twisting Yurchenko. It wasn’t necessarily a thing of beauty, but it was quite revolutionary, especially on the old vaulting horse. Nowadays, it is hard to argue the effect of the Amanar in gymnastics. It continues to garner a  high start value and any gymnast who can perform it automatically gets attention from her country when it is time to form a team. There have been many spectacular Amanars since Simona’s in 2000, and McKayla Maroney’s during the team final in London may be the best ever. (OK, it is. It is the best ever.) But since I assume everyone has seen it (multiple times), I will instead highlight the first Amanar that ever made my jaw drop. Simona’s Romanian successor was Monica Rosu, who won team and vault gold in 2004. Her Amanar twists beautifully and her landing was terrific.

Named after vaulting legend and stereotype smasher Cheng Fei from China. The evolution of the Cheng Fei vault was such a fun thing to witness. After the Yurchenko became the vault du jour {du decades? du infiniti?} several gymnasts added twists to the preflight and created a new vaulting pattern altogether. First, Oksana Omelianchik vaulted a Yurchenko half-on to a front pike off. Lilia Podkopayeva add a half twist to the pike and by 2000, several gymnasts laid out the front barani (named after Denisse Lopez in Sydney). Svetlana Khorkina {the Queen of Namesakes} amped up the possibilities by performing a rudi from a Yurchenko half (after already performing her signature Yurchenko half on- Cuervo off). Then came Cheng Fei. The build up to her signature vault was inevitable I suppose, but it was still so spectacular and implausible that I will always hold this vault up with high regard. Cheng Fei was already proficient with her Amanar, but the Yurchenko-half on to LAY OUT RUDI off was a thing of beauty. Few gymnasts have competed it (and competed well) since its debut. Also, props to Cheng Fei for making a vaulting name for herself when so many people were quick to place Chinese gymnasts as innovators on only bars and beam.

Named after Soviet great Natalia Shaposhnikova, who invented the transition element when the bars were an entirely different looking apparatus! I believe the skill was named for her at the 1978 World Championships, and the transition continues to evolve and take on new forms all the time. When the bars began to separate, the ‘Shaposh’ transition was more difficult to navigate as gymnasts were learning how to choreograph routines on the apparatus. By 1996, however, big flight in between the bars was common, and many, many gymnasts used the Shaposh, while also making their own variation! It is difficult to find a high level bar routine today that does not incorporate the Shaposh style transition. On YouTube, sportseverywhere made this lovely compilation of the Shaposhnikova style transitions for the current code.

Named after Hana Ricna from the then-Czechoslovakia. Hana, a tall and talented beauty, presented interesting lines and swing on bars, and she made a name for herself with a variation of the Tkatchev, performing it out of a stalder (she also performed a Delchev and Comaneci!) This high flying innovator was unable to compete at the 1984 Olympics due to the boycott, but she made several appearances at the World Championships (winning a bronze on bars in 1985), and she did compete at the 1988 Olympics, though she was not in her best form.The Ricna continues to be an impressive skills on bars, and gymnasts are connecting it to new sequences and transitions. Here is Hana competing in 1983—

Named after American Betty Okino, who was known for her long lines and strength and grace on balance beam. The full turn on beam has been a requirement forever, but not many gymnasts go above and beyond this requirement. The Code has rewarded turns with the leg at horizontal, so that has been in vogue. Some gymnasts dabble with the double turn and are quite successful with it. But gymnasts like Sanne Weavers and Mai Murakami really go above and beyond by throwing triple and quadruple turns, a trend started by Okino back in 1991. First trained as a dancer, the ambitious and confident Betty showed off her grace and control with a skill that many considered unthinkable. Still rare and a huge risk, the triple turn continues to showcase special talent on a precarious event.

Named after Natalia Yurchenko (yes, as in the Yurchenko vault). Also an innovator on beam, the loop is a daring skill that requires precision and a daredevil spirit. Gymnasts will sometimes loop around the beam from a dance skill or after a handstand, but not always from a back dive as Natalia did. Because the rhythm of the routine can be stalled after this skill, gymnasts may shy away from attempting it (or perhaps because it can be quite taxing on the body!) Elvire Teza is the ultimate queen of the skill, performing it with a full twist! I have included both Yurchenko and Teza below for your viewing pleasure. (Thank you to TheGymJunkies for the videos; shout out to @TheSnowborn for suggesting this skill for the list!)

Named after Romanian legend Daniela Silivas, who threw a double twisting double back at the 1988 Olympics (though the skill was performed by Aleftina Priakhina USSR at the 1987 Europeans, Priakhina never competed at a Worlds or Olympics). The skill was so revolutionary and difficult that it was rarely performed after its debut for nearly a decade. Come the 2000s and it started making more appearances, notably by Olympic floor champ Elena Zamolodchikova. Fast forward to London 2012, and the double-double was hardly a rarity. In fact, in 2013, Victoria Moors took it the next level, performing it in a layout position. The tumbling pass requires tremendous power and technique, and Daniela had amazing confidence to perform it! Though she is a little off on her landing, here is Silivas herself in the team competition at the Olympics in 1988 (enjoy the rest of her routine as well—she was the Olympic champion on this event, after all!)

Named after Chellsie Memmel, American powerhouse.(Can you tell I like turns?) As the Code continually tries to encourage grace, artistry, and choreography, the Memmel turn has challenged gymnasts to take their turns to the next level. First performed by Chellsie at the 2003 Worlds, this particular move has been well rewarded in the Code, and we see many gymnasts stretching themselves in order to perform it. Completing the move well is difficult, however; we have seen gymnasts stumble out before the second turn is complete, or a gymnast lacks the flexibility or control necessary to make the skill flow in the routine. Gymnasts are now adding more spins before and after the Memmel, creating more fluidity in their routine. My personal favorite in recent memory is the elegant Ana Porgras from Romania, who showcased well how the Memmel turn can be incorporated into a the overall choreography of a routine.

This is obviously not an exhaustive list, but hopefully you are considering which namesakes you love to see. Other skills I love are: the Produnova vault, the Podkopayeva on floor, the Yang Bo on beam, the Pak salto on bars, and any Khorkina (so many to choose from!) Keep the list going! What namesakes are your favorite skills to watch?

Previous The List: To Watch Again and Again
Next Mustafina arrives in Penza (translation)