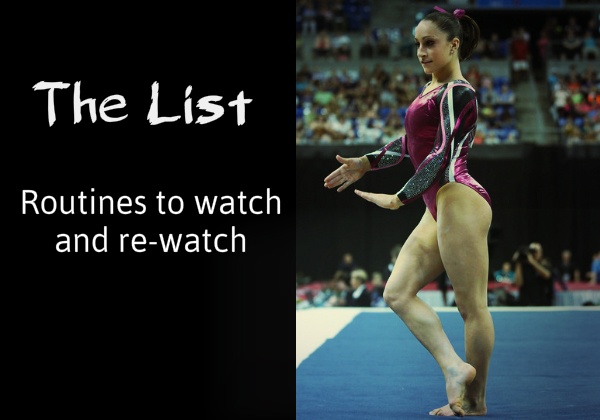 Remember back in the day, when TCG had the Love It or Hate It list? Well, this is a variation on that—a list of floor routines worth going back and watching again (and again) because the choreography is so captivating and spot on. Here are some of routines on regular rotation duringmy time YouTubing! (Not in any particular order!)

Ah, the birds. There is something so whimsical yet polished about this routine that I keep going back to watch it. It could not have been done as well without Oksana’s personality and facial expressiveness. Her commitment to this unusual yet utterly charming routine made her a star in 1985. Even the tumbling makes her look like a bird in flight!

While my personal favorite routine of Henrietta’s is her West Side Story interpretation, her Olympic set showed off her big personality and ability to captivate the audience. When Heni performed, you got the sense that the crowd was involved in every step she took. She had the ability to keep up with the bigness of the music and match it with graceful choreography and hardcore tumbling. From the opening pose to the last stuck landing, we were given a great treat.

A young Sveta! Performing to Carmen, Khorkina offered her own memorable interpretation to the classic piece. A great selection of music for a gymnast who stood head and shoulders over her competitors; this routine allowed Svetlana to draw the audience in with her expressive eyes, big leaps, and subtle movements. While Svetlana continued to thrill audiences with her floor throughout her career, this early piece of hers will always be one of my favorites. Though some will argue that her choreography is reduced to simple steps, grandstanding, and arm waving, I think this routine shows great connection to the music as well as well thought out choreo.

An iconic beauty of our sport, pre-Olga and Nadia, Vera captured the Mexico City audience’s hearts with her floor routine in 1968. With a routine where every little move, step, head turn, and finger was choreographed to match the music, Vera kept up with the pace and projected absolute joy and radiance.

Watching Jordyn for several years, I was always impressed with her power, technique, and difficulty, but she never seemed too comfortable with her choreography on floor. Until 2011, when she debuted this routine. By 2012, she was solid and confident with every step, and it was a perfect choice to show off her tremendous energy and natural personality. I know this goes against the ‘traditional’ sense of grace and artistry, but it works.

We’ve come to expect some beautiful and well thought out routines from the GAGE gym in Missouri, USA (think Terin Humphrey, Ivana Hong, Sarah Finnegan). Courtney’s fun music and perfect toe point give this routine a great personality and quirky feel; definitely not a cookie cutter routine! Courtney shows how detail oriented she is, and her timing with the music keeps you watching and smiling!

An incredibly deep and haunting routine, Yang Yilin showcases her beautiful lines and precise technique with this routine. The epitome of lovely, Ynag Yilin keeps you guessing with this well-choreographed and performed routine, full of movement and rich artistry. It’s not a simple feat to do such a dramatic routine, but Yang Yilin pulls it off!

Another dramatic routine, this one is based on power! Elena utilized her strong personality and trademark tumbling to create this awesome routine that was big and brash. The complicated leaps coupled with the confidence she displayed made for an incredibly memorable performance in Sydney. One thing I love about this routine is that it is uniquely Elena—I don’t know if another gymnast could pull it off!

In one of those routines that feels like you can take a beautiful picture at any moment, Natalia shows off delicate grace and artistry in this class routine from yesteryear. Her dance training and attention to even the simplest detail bring this routine up from a basic exercise to a thing of beauty. Each movement, each moment emotionally connect with her audience.

So those are some of my favorites—the ones I keep going back to and enjoying. What about you? Any Afan fans out there? Would you include Podkopayeva or Pavlova? Or do you prefer routines that are less balletic and more power and personality? Keep the list going—which routines captivate you?

Previous Team Russia in Pictures
Next The List: Namesakes