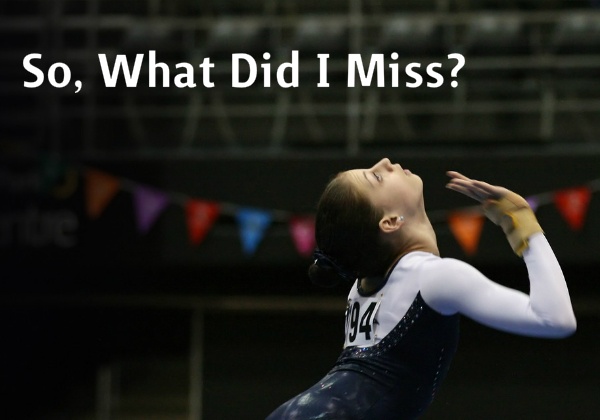 A week’s worth of gymnastics news and updates:

WOGA Classic will take place between the 13th and the 15th of February 2015, in Dr  Pepper Arena and Frisco Conference Center, Frisco, Texas. You can find here a competition schedule;

The results will be published here;

Serie A , the first meet of the season took place in Ancona on the 7th of February [via the-all-around.com]. It was a meet dominated by Brixia, with Erika Fasana and Vanessa Ferarri as top members. Tea Ugrin and Georgia Campana scored important points for 2nd place Trieste, while Enus Mariani was superb on bars and placed third with Pro Lissone [results];

Replay of the meet:

Registrations for 184 gymnasts representing 38 NF for the MAG competitions, respectively for 122 and 37 in WAG were received  [definitive registration list];

Find a dedicated page on the UEG website [here];

Best scores of 2015: the excellent initiative of having the top all around and per event scores of the year all in one place is continued [the-all-around.com];

NCAA: Oklahoma is no 1 across the board [source];

2022 Commonwealth Games: Durban in South Africa has remained the only candidate to host the games, after Edmonton (Canada) has announced withdrawal due to economic hardship [Inside the Games, via Gymnastics Coaching];

Catalina Ponor to make a come back for Rio, various sources have reported this throughout January but now things are starting to take an official turn as Catalina has registered for Anti-doping control with the FIG. She will be allowed to compete in FIG meets six months after registration, mid-July 2015 [FIG]. This makes Catalina eligible for 2015 Worlds. Catalina is currently training in Puerto Rico;

Aly Raisman participated at the first US camp of the year and signs are very positive. Her first goal of the year is to be selected to compete in  Jesolo (the team will be announced mid-March, after a second national camp). This year, Aly wants to participate in all the “traditional” meets, from Jesolo to Classics to US Nationals and, top prize, Worlds [fulltwist.net];

Martha Karoly  talks about the new US seniors (counting on Bailie Key to deliver, as we all do):

2015 Euros Montpellier official website now contains interviews with some of the participants. So far you can read what Vanessa Ferarri, Claire Martin and Marine Brevet want to achieve this year at Euros [here];

Toni-Ann Williams, on her first year competing in NCAA for Berkley and her hopes to compete at World Championships for a 2nd time, representing Jamaica [International Gymnast];

Annabelle Schmidt on the reasons she has decided to retire and her new life as a gymnastics coach [International Gymnast];

Sydney Laird is a new Canadian senior who trains in the US. Her first competition of the year was Elite Canada[thegymter.net];

Victoria Moors on floor at Elite Canada – it was Victoria’s first competition in more than eight months:

Gymnastics Meets is a wonderful new youtube channel where you can watch some of the best national and international competitions of the 80s and 90s. I saw it linked to first by Gymnastics Coaching [Gymnastics Meets];

Sara Dorrien has a new article in store for tomorrow and The Couch Gymnast will have results and reports from this weekend’s meets so keep close!

Previous A Look Back: Grishina
Next February Birthday Profile