A Look Back: Grishina 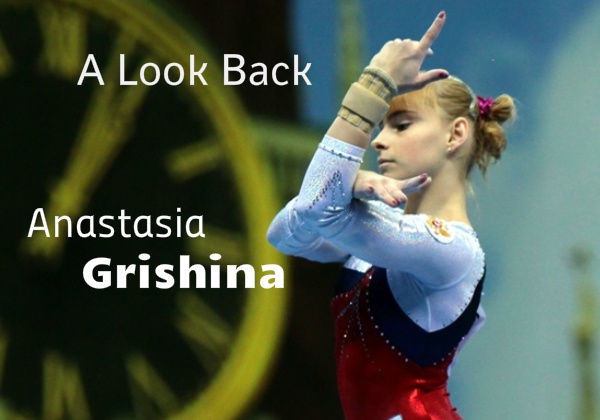 As we head into a new competition year with a handful of countries holding their national championships in March (Russia comes first, followed closely by France and the U.K.), a lot of attention will be rightly focused on first-year seniors and how they fit into the picture.

How will they round out their respective teams? Will they apply any pressure to those athletes who have been on winning streaks?

Before going there, however, it’s interesting and instructive to take a look at the previous year and those gymnasts who had unexpected outings. It’s a reminder that in the world of sport, anything can happen. Our predictions and our hopes are only as strong as the next day of competition.

Without a doubt, the first person that fits that bill on Team Russia suffered her unexpected turn of events during the very first meet of the season, the Russian Championships. Heading into the final rotation of the team competition, Anastasia Grishina landed her first pass (whip to triple) badly, sustaining a knee injury that took her out of competition for the rest of the season.

Notwithstanding the disappointment of Viktoria Komova’s protracted return to international competition, it’s arguable that Grishina’s fate in 2014 was the most disappointing (in a team sense) because of the high expectations placed on her performance and the severity of the injury. Unlike Olympic compatriots who were competing at the domestic championship minimally, simply testing the waters with the long view in mind, Grishina was there guns blazing, with upgraded routines and a competitive all-around program to show off. She was emerging from a scattered 2013: a beautiful and redeeming post-Olympic performance at the 2013 European Championships, where the Muscovite grabbed the all-around bronze medal in front of a home crowd, but a rough second half of the season that ended with a premature departure from The Russian Cup. Valentina Rodionenko didn’t withhold her opinion from the press, stating that the athlete had warmed up for her performance in Penza “with not much zeal.” (http://www.itar-tass.com/c20/849582.html)

Grishina’s coaches cited her sharp back pain advisories from doctors that she not compete, but that didn’t persuade the coaching staff to consider her for a spot on the 2013 World Championship team. (http://www.itar-tass.com/c20/849582.html)

If the Rodionenko’s were frustrated in September, however, they were singing a different tune by February 2014. Asked about her expectations for the season’s inaugural competition, Valentina Rodionenko said she hoped to see Grishina “shining in all her glory” in Penza. (http://itar-tass.com/sport/1033050)

It’s reasonable to conclude that in the worry surrounding Komova’s very measured return and Aliya Mustafina’s flirtation with retirement following the 2013 World Championships, the coaches were hopeful that 2014 would be Grishina’s year: a fresh start, perhaps, with the support of a team that needed a medal-contending all-rounder badly.

In a cruel twist of fate, that possibility was not realized and an athlete I’ve always considered comparably talented to her more decorated teammates spent the year rehabilitating her knee instead of delighting us with textbook illusion turns and inconceivably exciting double tucks.

Thankfully, it looks like Grishina is aiming for a return to competition this season. Competing at the Moscow Championships earlier this month, her performance may have been inconclusive for assessing international readiness (her highest scores, in the low 14 range, came on vault and floor exercise, ironically; and as of yet no video has surfaced) but it certainly confirmed her intention to keep training and competing, goals that have been somewhat elusive since her injury.

And so, despite the attention that will justifiably be given to the 1999ers making their senior debuts in the coming months, it would be wise to keep an eye on Grishina and others like her. They will be the ones seeking to restore their places in programs that seem to be racing forward, and their experience, despite the wear-and-tear that comes with it, could prove to be valuable.

Previous WOGA: Elite Qualifier UPDATED
Next So, What Did I Miss?