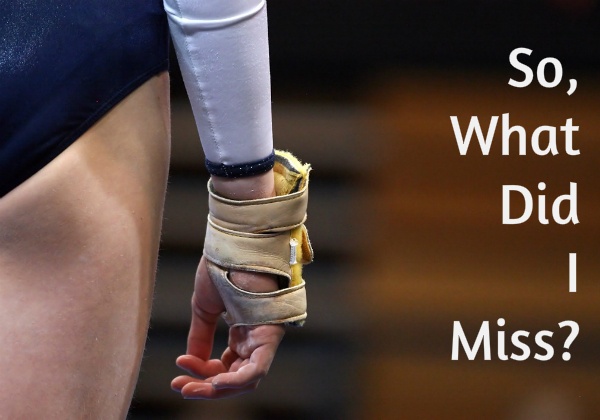 It’s not yet full on competition season, yet so much is happening! Here is what happened last week:

The Elite qualifier was also an opportunity for many consistent performances. [HERE]

Lauren, for The Gymternet also reported has reports for both the Junior [HERE] and the Senior [HERE] competitions.

2015 Nadia Comaneci International Invitational  – In Oklahoma, three Romanian juniors from Deva (born in 2001) swept the gold medals. Deva was followed on the team podium by Canada and a Mixed team. [HERE]

Jessica Lopez’s performances on beam and bars were the highlights of the senior competition. [HERE]

Canada Games are happening as we speak. So far, Quebec have taken the team title while Rose-Kaying Woo won the all around.

2015 Gymnix – The field is set for the competition that takes place between the 6th and the 8th of March. This will mark the international debut of some highly anticipated Russian babies.

2015 British Championships will take place this year between the 27th and 29th of March in Liverpool. Find out more HERE

Gabby Douglas attended the January US camp but was unable to show much of her skills due to illness. Back home now, she is determined to work hard and prove that she belongs [HERE]

And a video released later, containing interview and skills (her bars and beam look effortless):

Back to the “big” team, Octavian Bellu says Larisa Iordache will not compete at the European Games due to a conflict of interests- she is set to take her baccalaureate in June [HERE]

Puzzle Gym have an article on the highs of 2014 for Romanian Gymnastics, senior and junior [HERE]

Skills: will the triple twisting Yurchenko be called the Skinner, the Biles or the Maroney? [HERE]

Beth Tweddle is so generous and gracious [HERE]

Youna Dufournet is training in Nottingham, home of the Downie sisters [HERE]

Russia: 2014 was not fantastic for some of the Russians and especially Anastasia Grishina would really need a win this time around [HERE]

US January Camp – the seniors:

Watch all the videos from camp HERE

Stay tuned, more interesting articles will follow on The Couch Gymnast this week!