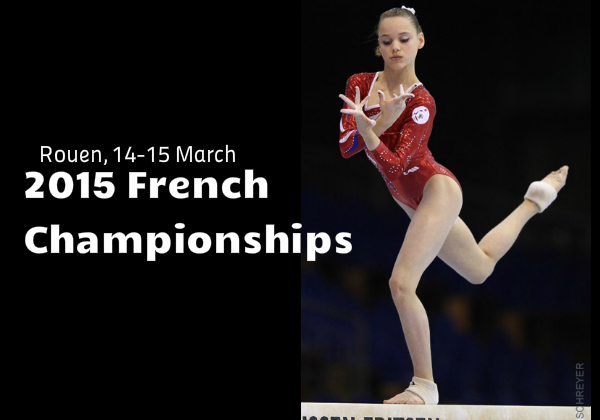 In the All Around standings, first-year senior Loan His took the title with a total score of 55.700, adding Senior French National Champion to the Junior one she holds from 2014. She also placed first in the Floor Exercise Final with a 13.700. A montage of her floor routine and golden moment is already available here:

Second-year senior Louise Vanhille claimed silver in the All Around with a total score of 55.300, won gold on Uneven Bars with a 14.250, and tied for second with Claire Martin on Floor Exercise with a 13.650. Check out her floor routine here:

20-year-old Marine Brevet rounded out the All Around podium, finishing third with a total score of 55.250. She has the most international exposure of the top three, though unlucky timing with injuries has prevented her from competing at several top competitions. Here she is on floor exercise, showcasing her maturity. she begins with a solid DLO:

In the Vault Final, Camille Bahl, Coline Devillard, and Manon Strosberg finished 1-2-3, respectively, and in the Uneven Bars Final, Marine Boyer and Lorette Charpy finished second and third behind Vanhille. (Boyer scored a 14.050 and Charpy a 13.750.)

Boyer went on to place first in the Balance Beam Final with a 14.800, outpacing 2014 European Event Finalist Claire Martin, who came in second with a 14.450, and Charpy nabbed another podium finish with a 14.300 to place third.

According to the French Gymnastics Federation’s website, a commission will meet on Monday to select the four female gymnasts who will represent France at the upcoming European Championships in Montpellier. We wish them well.

Additional Routines, with more to be added as they become available:

Source for the image: http://www.ffgym.com/