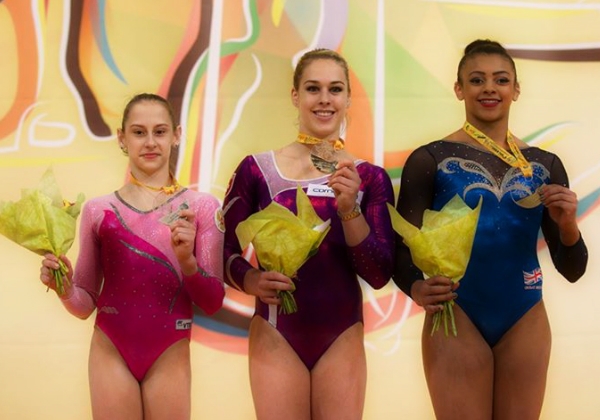 A few conclusions can be drawn: the overall level of difficulty was lower but this did not take away from the richness of the competition. At the podium – level, the difficulty scores can be compared with the top shown so far in the World (perhaps excluding Simone). Giulia Steingruber took the title thanks to an overall D total of 23.8. This number is not far from the no 2 and no 3 totals of the year:  Bailie Key and Aly Raisman have posted at Jesolo scores of 24.1-24.0.

Maria Kharenkova was not far behind, with her 23.2, while Erika Fasana (4th place) posted the 3rd difficulty total (23.1). Bronze medalist Ellie Downie and her team mate Claudia Fragapane both had total D scores of 22.8. But if we go back and compare with the rest of the world, these numbers already take the difficulty conversation down to places 19 to 21 (equal to Jessica Lopez at the American cup, Spiridonova’s at Russian Champs and Eythora T’s at her National Euro Trials).

Still, there were elements of difficulty, routines of 6.0 D, and they contributed to the animation. The fact that there were few major errors also contributed a lot. I counted only 6-8 falls in the whole final (correct me if I’m wrong) and among the top field, there were no falls up (down?) until 6th place Fragapane.

Your take: how did you find the competition interesting or not so much? What was the highlight and what outcome would you change if you could?