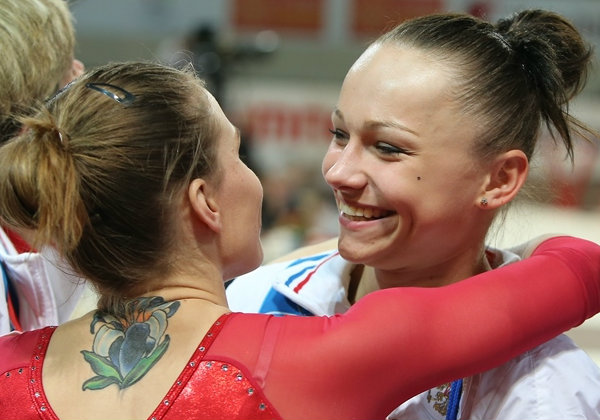 With the thrill of victories settling, the agony of defeats abating, and the athletes who participated in the 2015 European Gymnastics Championships back on home soil and preparing for the next challenge, it’s time for the gymternet to digest. To help with that process, Editor-in-Chief Bea Gheorghisor and I will be posting a series of articles that break the competition into three parts:

Clearly, this meet was an individual one, and thus did not include a team competition. It’s still worth considering the collective performance of the national contingents, however, especially in regards to two questions: how might  they have they faired in a team competition format, and what does that mean for the future?

Without a doubt, the best “team” performance was given by Russia. Although they missed out on All Around gold, breaking the streak that Ksenia Semenova began in 2009, they still left Montpellier as the most decorated team with a total of five medals, they won gold in three of four Event Finals, and every member of their four-woman contingent delivered where she was expected.

Certainly, there were some hiccups. Maria Kharenkova was the favorite to win the All Around competition on a number of counts (including the fact that coming into the competition, she had posted the highest All Around score to date). However, I don’t think anyone in her right mind considered a win by Kharenkova to be a given. Despite being a very capable gymnast, she has only very recently become a serious all-rounder for Russia, and even now, her performance in that department feels more provisional and temporary than permanent. Without the power to compete a DTY, she simply doesn’t have enough wiggle room to afford costly mistakes anywhere else. Her slip-up before her toe-on half to piked jaeger on bars assured that she’d be playing a game of catch-up for the rest of the meet. Even a stellar beam routine couldn’t make up lost ground in the first two rotations. That being said, Kharenkova’s bar work has improved steadily over her career and quite dramatically in the last several months. She had already proven that before the All Around Final, and by thinking quickly and avoiding an even more costly mistake at the moment of the break, she may have proven even more, strange as it is to consider her performance that way. I’m sure she would have rather hit her set, but one has to imagine the Russian coaching team was impressed by her grace under pressure.

While Kharenkova’s All-Around performance was honorable, Russia’s real show was given by Maria Paseka, Daria Spirodonova, and Ksenia Afanasyeva in the Event Finals. And what a lovely display of diversity it was! Veteran and youth, power and grace, old and new. Spirodonova continues to reach new heights on bars, and that’s an accomplishment despite only counting minor changes to her routine since she became senior last year. I have to admit, I still get a little nervous every time she begins her routine, if only because nerves have consistently had their way with her on other events, most notably on balance beam. It’s mind-blowing to me that on an event as technical as bars, where timing is everything, someone like Spirodonova can consistently deliver. But that’s just what she has done. Perhaps it’s high time to stop worrying for her. She has now added gold at a major championship to her collection. Rocking it out on the events where Russia has stalled since 2012, Olympic veterans Ksenia Afanasyeva and Maria Paseka reminded everyone why their team still needs them. I won’t say much about their title-winning performances here because they will show up later in this series, but suffice it to say that between the two of them, _two major themes in Russian gymnastics were displayed:_with Afanasyeva’s beautifully executed floor routine, qualitatively different from the type that has defined the current Olympic cycle, we saw a program trying (and in this case, succeeding) to work with what is a challenging code for them, while at the same time retaining the grace and technique that has been their hallmark for as long as we can remember. Conversely, Paseka’s winning vaults revealed a program determined to close the gap with the USA. No innovation or pretty execution needed: just two huge vaults. Her Amanar was great– one of the best we’ve seen from her– and frankly, it doesn’t matter that her Cheng needs work. It was enough to seal gold at this competition and she performed it safely. If she continues to improve, even minimally, her vaults could guarantee her placement on the 2015 World Team. I don’t even think she’d have to prove medal-worthiness in a Vault Final; the ability to simply land one with a massive start value in a team line-up might be enough.

If Russia proved its stamina despite all of the negative press it’s received since Alexandrov’s departure, Great Britain proved its staying power after their historical win over Russia at last year’s European Championships. Although they didn’t bring any gold medals home, they brought home four medals total, making them the second most decorated team in Montpellier. First-year senior Ellissa Downie lived up to all the hype surrounding her and then some, despite her senior debut at a major international competition being somewhat overshadowed by the other big stories. A consistent podium finisher across all Event Finals in the last couple of years, Ellie has recently become a major All-Around contender, a role she proved in Montpellier with solid performances across the board, especially on vault and uneven bars.

As with Russia’s case, however, the Great Britain contingent really made their mark in the Event Finals, where they wrapped themselves in silver.

Becky Downie earned two of them, on bars and beam, narrowly missing gold in both cases. She gave two captivating performances, the first equal to last year’s title-winning performance in every aspect except emotion, a moment that will be virtually impossible to repeat. Still, the fact that she delivered so dymanically is huge. Becky did not have the best start to her season, so coming into this competition it was pretty questionable whether she’d have a real chance to defend her title. Though she didn’t defend it, she came awfully close, matching Spirodonova’s D Score and ultimately losing to her by only about two tenths. Clearly, she hadn’t reached her full fitness until these championships. Perhaps she knows something about pacing herself. After a disappointing showing in the All Around Final, Claudia Fragapane rallied to deliver a very well executed and energy-defying floor routine. With a hot-and-cold record (especially this season), this is a gymnast that has attracted a lot of attention, both positive and negative. To me, her strength lays not so much in her overall difficulty value and the potential that has, but in her uniqueness. The success of gymnastics in Great Britain has mostly ridden on the backs of a handful of standout athletes, athletes who have perfected their craft on one or two events and then worked to make their routines interesting to the eye. Claudia stands in that tradition and may even be on her way to transcending it. And her floor routine is at the center of that quest.

In conclusion, members of both the Russian and Great Britain contingents should have had easy dreams on their flights returning from Montpellier. Although Russia returned with more medals and picked up titles, Great Britain may have revealed greater depth had there been a team competition. All in all, they had more medal-capable athletes when you consider the All Around and all of the Event Finals together. Of course, this is at the continental level rather than world level, and Russia was missing at least one of its active key players (Aliya Mustafina). Still, when it comes to the three-up-three-count team format, it’s reasonable to conclude that Great Britain is on its way to looking much stronger in that department. Conversely, Russia may be able to boast an amazing athlete on each event, but at this point in the season they still may be struggling to put together a winning line-up. One big score on each apparatus can only go so far.

Well, that’s a wrap for best “team” performances. Stay tuned for what Bea has to say about best individual performances and Montpellier’s biggest disappointments!

Previous Montpellier Euros: The Disappointments
Next The Russian Performance at Euros