The Russian Performance at Euros 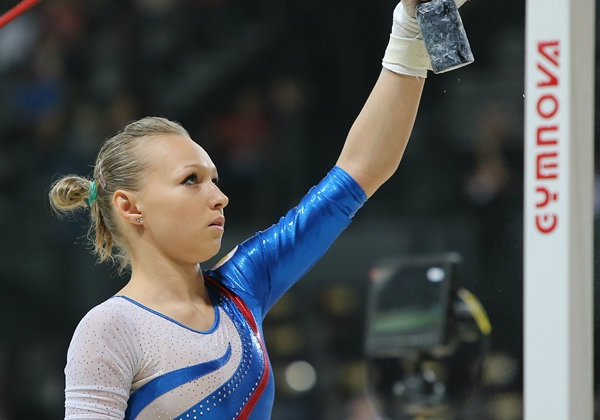 The Russian Team arrived in Montpellier with a young but experienced team that had Ksenia Afanasyeva as their leader but lacked Aliya Mustafina. Mustafina is taking time off to recover from back problems and upgrade her program, while Afanasyeva is returning from a prolonged time of recovery from injury. The team was formed by Ksenia Afanasyeva (23), Alla Sosnitskaya (18), Daria Spiridinova (16) and Maria Kharenkova (16). However, after podium training Alla Sosnitskaya withdrew due to ankle problems and Maria Paseka (19) was flown in the day before the start of the competition. While two girls were scheduled to do all-around, Kharenkova and Sosnitskaya (later Spiridinova replaced Sosnitskaya as AA competitor) were the only two capable of winning a medal in that final. Maria Kharenkova carried a heavy burden on her shoulders as the last three European All-Around Champions had come from Russia.

Qualifications went excellent for Russia, they qualified two girls to all the finals except for beam where only Kharenkova advanced. In the all-around Maria qualified in first place after a consistent and well executed day, however the gymnast qualifying behind her had not had the best day and had fallen off the beam. Giulia Steingruber was trailing Kharenkova by 0.731.

In the AA final Maria started on bars and things didn’t go well; she was forced to improvise after transitioning from the low to the high bar. Maria’s greatest victory here was that she had the mental toughness to get herself out of the jam without jumping off and giving away her medal in the all-around. Mental toughness like that is an example needed by the Russian Team and it came from its youngest competitor. Unfortunately for Maria her low difficulty vault meant she had no room for error, and 0.667 had been lost in comparison with her qualification score on bars. In the same rotation Giulia Steingruber had competed on beam and had won 1.075 from her qualification round as she had stayed on. In addition Giulia had a 0.6 advantage in difficulty scores, so from that moment on Maria was fighting for silver. She moved on to beam competing with her usual high difficulty and good execution, scoring a 15.000, and then moved on to floor where she increased her qualifying score by 0.067 with a 14.133. She finished on vault with a simple full twisting Yurchenko and was second by a 0.741 margin, meaning that even if she had scored on bars as high as she did in qualifications, she still would not have won. However if she would’ve had a DTY there would’ve been a fighting chance, given the 0.8 increase in difficulty it would have meant. We can only hope that this was a very positive experience for Maria as she has now medalled in the all-around at a European level and is motivated to learn a harder vault.

For the Vault Final Ksenia Afanasyeva and Maria Paseka qualified in third and fourth place respectively, without showing their hardest vaults. The last time the two of them competed together was in Kazan (Universiade) in 2013 where they both showed Amanars that earned them medals. For Ksenia Afanasyeva, that performance had been her Amanar-debut as well as her last major competition before her prolonged injury. In France she showed that she was ready pick up her career where she had left it; she showed the Amanar that could really help the Russian Team in at the world level. Her second vault was a layout Podkopayeva and she clinched a bronze medal. Maria Paseka, upgraded her two vaults, becoming the only gymnast in the final to perform two vaults with a 6+ start value. First she competed a Cheng, and then an Amanar. Her Amanar was much improved from the ones she had shown in previous major competitions, which makes her a contender for the World Team. Maria’s victory is bigger than the title itself, as she had been flown in a day before the competition, had no podium training, and was most likely in shock that she had been given the opportunity. However, none of that showed in the qualification round as she advanced to the Vault and Bars Finals. In the end, the Bars Final did not happen for her as Maria Kharenkova qualified ahead of her. This was another test of mental toughness and Maria Paseka passed.

In the Bars Final Maria Kharenkova had the same struggles as in the all-around but this time they seemed a little bit bigger and she decided to jump off. Why did she not try to salvage her routine? Well maybe because unlike in the all-around where a good beam and floor could help make up for lost tenths, in the final this was the only score that would count. Winning the bars title was Daria Spiridinova. Daria had qualified first into the final, had the top score on bars in the all-around final and won the title with a 6.7 difficulty. Her execution is absolutely flawless; she’s a worthy carrier of the Russian tradition and pride on uneven bars. Her score of 15.466 could give Russia a medal in a Worlds bars final (she’s already last year’s bronze medallist), but unfortunately Daria’s struggles on beam and floor are big. She fell on her double pike dismount on floor both in qualifications and the all-around and her beam did not score well either. It raises the question: Could the Russian team have a one-event-specialist who can heavily help in the Team Final and win an individual medal but only in that one event?

Since turning senior Maria Kharenkova has been one of Russia’s strongest (and most needed) beam workers. She was the defending European Champion and her biggest rival, Larissa Iordache, was not in Montpellier, so the title was hers to lose…and she lost it. In podium training Maria had been struggling with her acro-series and even though she had survived it quite well in qualifications and the AA Final, she came to grief in the Event Final. After getting back on the beam Maria was so angry that she either forgot or did not care to execute the leap series that was to follow the acro-series, an omission that cost her even more as she lost D-value for not performing a requirement. However, her execution did not suffer much more even though you could see she was visibly irritated as she finished her routine. Her grief was surely immense as her accustomed scores, that usually vary between a high 14 and a low 15, would have won her the title by a mile. If anything is to be rescued from this Beam Final it is that even though Maria fell on her second skill she went back up and performed without letting the fall mess with her execution, allowing her to have a dignified ending. While only personal glory and reputation was at stake here, this could be really useful in a Team Final, because Maria is proof that even if she makes a mistake she will be emotionally strong to prevent a second fall.

Maria had one more test to go through, the Floor Final. Maria was the first to perform on floor and while she had no chance to win a medal, even with a perfect routine, she needed to show that she could keep herself together after suffering disappointment in two finals, one of them being only minutes earlier, and so she did. Maria could finally smile after four passes were landed on her feet. The task of bringing home a medal on floor was Ksenia Afanasyeva’s and she arrived thinking of only one medal: gold. Once again she wanted to pick up her career where she had left it, as a European Floor Champion, and once again she did. She graced the floor and stuck her tumbles, particularly her first and last, to clinch the title. Overall this was a very positive experience for the Russian Team as they are returning home as the most decorated country, winning three out of five possible titles, and all the girls are returning home with a medal of their own. The D-scores for Russia seem to be improving with two Amanars, a 6.7 D-value bars routine, a beam that can score a 15.000 and a floor rightfully worth of a European title, all this without Aliya Mustafina who has been the rock of the team the last four years. The depth is also growing since left at home are gymnasts of great caliber working to get their chance at major international competitions such as Seda Tutkhalyan, Maria Bondareva and Viktoria Komova. The next big test are the European Games and we hope to see only improvements from what was presented in Montpellier.