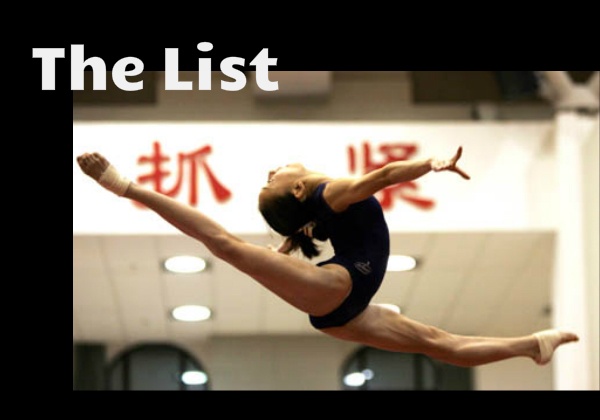 Increasingly, gymnastics is enjoying the presence of women whose careers expand over several years, code of points, and Olympic Games. Sometimes, though, a career of a gymnast is limited, for various reasons. Below is The List of gymnasts who impressed at their one and only World Championships with one (or several!) titles and medals.

The standout during the 2007 build up to the Beijing Olympics, Shawn did not disappoint at the World Championships in Stuttgart. Despite some shaky beam sets, Shawn showed off her difficult sets, confidence, and charm, which led to three titles (team, all-around, and floor). After a successful 2008 Olympics, Shawn retired, attempting a comeback in 2011. Not named to the World team, Shawn retired in 2012 due to lingering issues with her knee. Despite her short career, Shawn’s legacy is still admired by gymnastics fans. Interesting to note: Shawn turned 16 in 2008, but was allowed to compete at the Worlds in 2007, despite being age ineligible—the FIG allowed for 15 year olds at the Worlds a year prior to the Olympics. Good thing for Shawn! A look at her all-around performances:

A young newcomer on the first (and only) Chinese team to win a World title at the 2006 Aarhus, Pang contributed hugely significant scores on three events (all but vault) for her team (replacing Li Ya on the bars). In the all-around, a sub-par beam set and vault kept her off the podium. Still, she finished 6th, the highest for her team. Unfortunately, she made several mistakes in preliminaries, so she did not qualify for any event finals. Despite good results throughout 2006, her younger teammates became age eligible in 2007 and 2008 (as well as an injured ankle) and kept Pang off future teams. My favorite is her floor, her super expressive choreography, and her over-extended leaps!

While technically not a World Champion, Cathy’s medal on balance beam at the 1970 Ljubljana Worlds was a huge moment, since every other individual medal was (literally) dominated by the Soviet Union and East Germans. A two-time Olympian, Cathy gave hope to gymnasts outside the eastern bloc. However, at this time in gymnastics history, the worlds were held every four years—at the midway point of the Olympics, so competing at the Worlds only once was quite common (though, of course, quite a few competed at more than one). I know I’ve posted this routine before, but let’s enjoy Cathy’s elegance and style one more time:

A most unfortunate story, Elena’s dominate performance at the 1978 Strasbourg Worlds is overshadowed perhaps by her tragic accident in 1980 that left her a quadriplegic at the age of twenty. As an eighteen year old she reestablished Soviet dominance after the legendary program took a hit after Romanian Nadia Comaneci stole much of the show at the 1976 Olympics. Mukhina displayed the daring of an Olga Korbut but with the polish of a Lyudmila Tourisheva. She won three world titles (team, all-around, and floor) in addition to two silvers on bars and beam. A broken leg kept her from defending her titles in 1979 (the first Worlds to be held in succession). Pushing herself after her injury, Mukhina injured herself on floor in 1980, breaking her neck. Mukhina passed away in 2006 and will forever remain in the hearts of gymnastics fans. If you’ve never seen her routines, prepare to be stunned:

A stellar junior, Maria grew up (in every way) at Deva, debuting as a senior in 1998. Though there were no worlds held that year, Maria enjoyed success at the European Championships. At the 1999 Tianjin Worlds, attention was focused on Svetlana Khorkina and Simona Amanar, as well as newcomers Andrea Raducan and Elena Zamolodchikova, but it was Maria who stole the all-around gold with her supreme consistency and strong beam and floor routines, barely edging out Viktoria Karpenko. Maria also helped her team win its fourth consecutive team title, and she won a bronze on vault. At the Sydney Olympics, Maria became an Olympic Champion with her team and finished third in all-around Romanian sweep.

Here is Olaru’s clutch beam set in the team final in 1999, after two of her teammates fell:

One of the stars at the 1989 Stuttgart Worlds, Natalia earned three perfect 10s while helping her team win gold and her own silver in the all-around. A beautiful performer, Natalia also finished fourth on vault, but her own teammates (including fellow one-time world competitors Olesya Dudnik and Olga Strazheva) kept her from qualifying for other event finals. With the break-up of the Soviet Union, Natalia’s home republic, Latvia, decided to not send anyone to the Olympics or join in with the ‘Unified Team’ of former republics. Sadly, Natalia’s career ended with politics. Side note: Dudnik retired due to injuries, and Strazheva came back strong after a devastating injury at the 1988 Olympics but retired in 1990. Also, this was the first Worlds with ‘new life’ in individual events. Enjoy the wealth of gymnastics greatness, courtesy of the last USSR World team:

Your turn! Who are the gymnasts we only got to witness once at the World Championships? Whether a champion, medalist, or stellar competitor—whose Worlds career was far too short?

Previous So, What Did I Miss?
Next Sao Paulo Word Cup: Beam and Floor