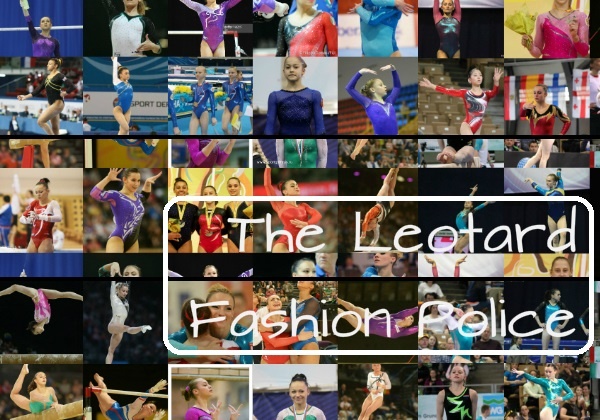 We give you in the 2nd part (find the first part here) of our LFP May Edition. A look back at some of the most influential or interesting leotards of this year’s Euros, with:

Sara: Eh, mixed feelings. I have a love/hate relationship with pink and it’s perfectly expressed in this leo: Love because she wears the color well; it gives her that youthful glow. Hate because pink inevitably gives that pretty-princessy look and leaves the casual viewer with the impression that these young women are not made of iron.

Emma: In comparison to Jurca and Bulimar who looked majestic in their pink Leo’s this one has something missing or maybe too much going on.

Bea: Despite all the pink, I didn’t hate this leotard. But maybe not on Maria, it seems that it washes her out somehow? Now that Sara pointed it out, it does soften her, in a way reflective of her emotions and vulnerabilities. And, like with any other child/teenager, there is a distinct possibility that she might like pink. And that she is not made of iron. Huh.

Marta Pihan Kulesza (Pics from Cottbus, wore the same at Euros in the EF)

Sara: I don’t love this but I’m also very self-conscious judging anything that Marta wears or does because she’s just that awesome. I do like the matching nail polish.

Bea: Something a little it different from Marta. I don’t like the colors that much but I am into the deceptively simple design.

Emma:  The Leo of Euros, she looks like a goddess and let’s face it, not many could wear gold and look good. She wins for me!

Bea: It was the leotard of the Euros indeed. Never has Millousi looked more glorious.

Sara: I thought this worked for Andrea. A good balance for the second-year senior. Youthful with the bright color but not pepto-bismal pink; sophisticated but not Millousi-mature.

Emma:  Standard Leo, nothing special and nothing fancy, nice but not amazing.

Bea: A leotard that works well for one moment in time. Like, I absolutely don’t mind it if this is a one time showing for a beam final at Euros (that ended well). But I will mind if I see the entire Romanian team wearing it in Torino next week-end.

Sara: I love this leo. There are very few white leotards I can say that about, but this is one of them. I like the rounded neckline, and the swirlies that fly in every direction. (It’s a wardrobe consistent with the inconsistent nature of Masha’s vaulting!) I don’t know, all in all, I just like it. Clean lines, delicate. It’s a fun contrast for a vault final. I also wouldn’t want to see the entire Russian team in it. It’s not a team leo. It’s uniquely hers.

Emma: Vintage, this was worn way back when by Porgras. I prefer the turquoise version.

Bea: I have the feeling that I have seen her wearing this number before. Her lucky leo, perhaps? She looked great in it, nonetheless.

Sara: If you can wear orange, I say wear it. So go, Sanne, go! I like this leo—the colors and the lines. It’s a stand-out without being too much. Probably looks the most athletic of them all, which is refreshing; almost like a dressed up version of a real, practice leo. It also looks like a good version of a patriotic leo. The Netherlands should consider changing their colors.

Emma:  A standard team finals Leo. Pity the Dutch girls aren’t wearing their own designs for finals. I’m all for patriotic team leos but in an individual comp surely they could wear their own choice?

Bea: I came here to say that Sanne Wevers can wear orange the same way she can triple turn into a double L turn. Seems impossible but it does work.

That would be all for this month. Thank you for reading, we are waiting for your comments and suggestions for next edition.

Previous Need to Know about the Competition Weekend
Next 2015 Anadia: Report, Results & Video