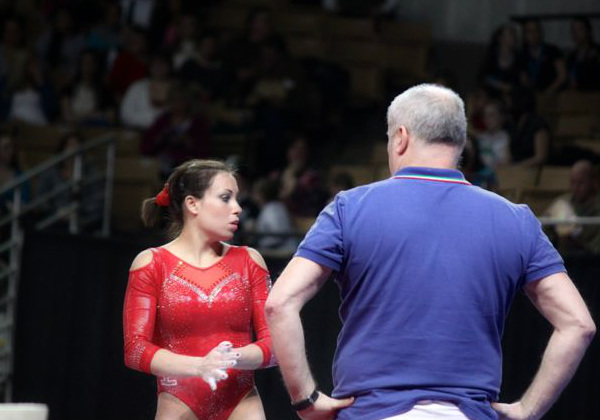 After a competition, those with the medals are the ones who usually get the press and we remember years later.  Sometimes, though, a gymnast finishes in 4th place (as Vanessa Ferrari calls it, ‘the wood medal’) and we remember that gymnast well.  Perhaps we are left with a haunting feeling (or strong conviction) that they should have medalled.  Or maybe we were dazzled by a routine that just missed out, but was still one of the star performances of the competition.  Then, of course, there are the gymnasts who come so close and we cherish their careers, despite the strings of fourths. Below, The List looks at the Significant 4th place finishes in gym history.

Following the 1976 Olympics, Nadia the Star returned home to a lot of attention, changes in her coaching system, and a growth spurt.  There were no Worlds in 1977, so when the Romanian team showed up in 1978 to Strasbourg, France, many people did not recognize the ‘new’ Nadia—taller, with a short haircut, and not as fresh as she looked at the Montreal Games.  Nonetheless, she was the highest scorer for the Romanians in the team competition.  In the all-around, Nadia scored a competitive 9.9 and two 9.8s, but the 9.4 on bars after a fall dropped her off the podium, causing many to wonder about the fate of Nadia.  It is amazing how a fourth place finish meant that many thought Nadia was, indeed, finished.

Nadia coming back in event finals to win the beam title–

Julianna McNamara USA 1984 Olympics While the American star the Los Angeles Games was Mary Lou Retton, her teammate McNamara also had an impressive showing, winning the bars title (tied with Ma Yanhong) and the silver on floor.  In the all-around, she scored a 10.0 on her signature event, bars, but a shaky beam set left her in fourth place.  Otherwise, two Americans could have been on the podium, a feat not accomplished until 2008 (Liukin and Johnson).

One of the legitimate stars of one of the most amazing teams, Yelena was always in the mix, especially in 1999.  Yelena, a strong team player, vaulter, tumbler, and overall all-around athlete, helped her team win silver, then she went on to four fourth place finishes—in the all-around, vault, bars, and floor.  Though she did not win any individual medals at these championships, fans remember her consistency and presence throughout the competition. Here is Yelena’s floor from the AA, which scored a 9.812.  Had she repeated that score in EF, she would have won the silver.

As most people watched Team USA (beset by injuries ad relying on two alternates) and Romania (5-time reigning world team champs, not to mention reigning Olympic champs), China was quietly working its way to potential podium finish.  Despite some mistakes on bars, their scores were strong.  Until the beam rotation, where the gymnasts were seen warming up on the podium while waiting for the green light.  A two tenth neutral deduction was given, which resulted in a bronze medal winning score dropping to a fourth place score.  As a result, Australia won its first ever world team medal.

Li Ya on beam, where you can hear the commentator’s expressing concern about her podium warm ups.  (On another note, check out the move at 1:19.  Amazing!)

With the tie-breaking procedures put into place in recent Olympic Games, we were bound to see the effects on the podium.  Raisman, Ponor, and Ferrari all lost a tie-breaker, keeping them off the podium at the Olympics.  Perhaps Ferrari’s is the hardest pill to swallow, as she did not receive any other medals.  Raisman, who also had a heart-breaking 4th-by-tie-breaker in the all-around, won team gold and was able to come back with two medals in the event finals.  One of those medals, the bronze on beam, came famously after her coach filed an inquiry when her score initially put her fourth position.  A review of the routine raised her difficulty, which put her in a tie with Ponor.  Compare this to twenty years ago, when three gymnasts won the bronze medal on floor at the 1992 Olympics! Ferrari’s floor—

My beloved…..it is hard to follow a career for so many years and feel the pain of the ‘the wood medal’ time and time again.  Don’t get me wrong—I know that sometimes Anna was scored fairly and actually earned her fourth place standing.  But sometimes….

A heart-breaking situation……the reigning world champion finished 4th in qualifications at the Olympics…..but two of her teammates placed higher than her, thus eliminating Jordyn from the AA final.  It was the first time an actively competing world champion did not make the AA finals.  The fact that she finished so high in qualifications seemed to add insult to injury, causing much conversation about the qualifying rules, as well as the two-per-country standard.

A brief news report, but some clarification—Aly Raisman (2nd) qualified ahead of Gabby Douglas (3rd), and Jordyn did eventually speak with reporters (and was incredibly classy, by the way).

I know there are many more favorite fourth place stories that come to mind—please share in the conversation below!

Other articles from the series:

When you Cry, I Cry