In Defense of Gina Gogean 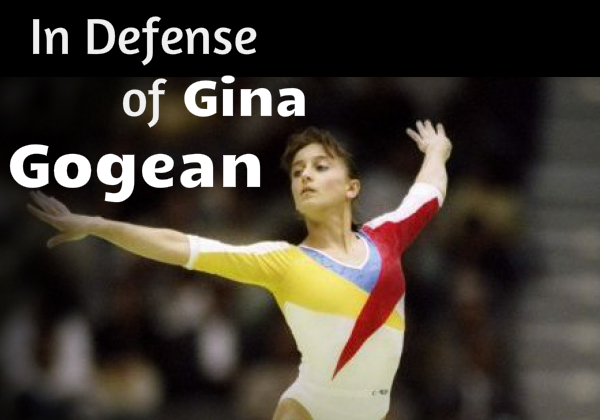 These are just some of the common complaints I have heard and read throughout the years concerning Gina Gogean of Romania.  Gina retired in 1998, after a successful world competition in 1997, where she won team gold, vault bronze, beam gold, and floor gold.  Those last two golds have been the stuff of controversy; Gina’s safe and solid routines won out over more exciting routines from gymnasts who really pushed the boundaries.  (Most notably, Kui Yuanyuan of China, whose stellar routine was relegated to bronze after a lower score and then a tie breaking procedure.)  Fans all over the gym world were not happy to celebrate in Gina’s success, since her wins overshadowed routines that many felt should have been rewarded over her routines that stayed safe.

As a result, there is a lot of Gina-bashing out there.  But it wasn’t always like this.  When Gina first made her name on the gym scene, she was the young upstart from a strong Romanian team that was trying to rebuild after their country survived a political revolution.  At the 1992 Europeans, a young 14 year old (or 13 year old, it’s still a little unclear), Gina impressed everyone with her silver in the all-around, vault silver, and floor gold.  She also had a strong arsenal of tricks, including a Tkatchev/Counter-Kim release combination on bars, and stacked floor routine (whip through to full in, whip through to double tuck, full in)

Dare I say….there is even some personality here?

While her teammate Lavinia Milosovici was the Romanian star at the 1992 Barcelona Olympics, Gina was a major contributor to her team’s silver medal.  She also placed 6th AA and 5th VT.

I love her beam performance from the AA:

Here she is vaulting in 1994 at a meet against the USA:

In 1994, the World Team Championships were held months after the World All-Around and World Event Finals.  After winning five medals at the ’93 and ’94 individual worlds, Gina was set to help her team win a title at the end of 1994.  In the qualifying optionals round, Gina slipped off beam and bashed her head.  It was an extremely scary fall, and (in my opinion) Gina was not quite the same since.

While her routines (especially on bars) were becoming more and more safe, after the fall, this mentality seemed to increase, especially on beam.  Her routines became cautious, and she started falling more often in competition, including on beam at ’95 Europeans AA and ’95 Worlds Team, then again on bars at ’95 Worlds AA.

Her work on floor and vault remained top notch, though she was overshadowed on vault by her legendary teammate Simona Amanar.  Going into the 1996 Atlanta Olympics, much was expected of Gina and her teammates, but most attention was on Barcelona star Lavinia Milosovici, vault and floor worker Simona Amanar, and the young, artistic Alexandra Marinescu.  Who would have imagined that it would be Gina Gogean who would walk away with the AA silver, in addition to a bronze on vault and beam, as well as a bronze with her team?

Unfortunately, with all this success came the criticism.  Gina’s all around routines were very solid, and all of her routines were worth a 10.0, but they were very safe, conventional, and her bars and beam were unimpressive in composition.  Her second vault for event finals was a Phelps (Tsuk laid-out Arabian), but she seemed to cheat it into an easier Tsuk half (and still pull off a medal and 10.0 SV).  Her beam set won out over beam world champion Dina Kochetkova from Russia, who did have some bobbles, but performed amazing difficulty and combinations.

After the Atlanta Olympics, Gina struggled with being the leader of the Romanian team when some of her teammates, notably Milosovici, retired.  Going into the 1997 Worlds, there was a strong sense that this would be it for Gina.  As a result, some felt that her actual results were parting gifts, most obviously in the event finals, with that controversial gold on beam, and another gold on floor, which she won over Svetlana Khorkina due to a tie breaker.

Though Gina continued on for a bit in 1998, her four medals at Worlds (including team gold and vault bronze, not to mention 4th in the all-around) remain her last significant contribution to the sport, and this is where so much derision springs up.  The safety of her routines, the lack of personal connection in her performances, and the scores that ranked her above stellar and packed routines has left too many people to dismiss Gina entirely.

While I do understand and agree with a lot of the criticism, I also try to not completely disregard Gina and her gymnastics.  For one thing, she does not score herself or dole out the medals; she was playing the game best to her advantage.  But I know that this does not do much to dampen people’s annoyance and anger.  Instead, because I love gymnastics, I enjoy Gina for the contributions she made that I do indeed love.  If she competed in today’s era, I am sure she would not bore us with her uneven bar routines, and who knows if she would continue with beam after that fall at Worlds.

Speaking of today’s era, I do think it is important to note that the scoring system today is a nod to the criticism of Gina’s philosophy of gymnastics.  The beam routine of  Kui Yuanyuan would certainly win today, even with a wobble or two, over Gina’s steady but safe routine.  The new code wanted to encourage and reward difficulty, innovation, and performance.  (An entirely separate post will have to discuss if this has actually happened…or are routines becoming cookie-cutter, dictated by code loopholes, and dry?  I digress…)

At the end of the day, Gina is clearly a dedicated technician of the sport.  She has brought so much to her country and their program, and she was a major player of the Barcelona/Atlanta Olympic era, which was quite a wonderful time for the sport (in my biased opinion.)  She may not have been all about the personality, smiles, and camera mugging, but her hard work is laudable.  In a sport where you have to work hard and be dedicated, Gina stood out as one of the best examples.  Maybe a quiet, driven, successful introvert is not a headliner, but it takes all kinds, doesn’t it?  And many will identify with and appreciate Gina for who she was and her gymnastics, beyond the scoring controversies.

I’ll leave you with my favorite performance from Gina.  This is her first of three world titles on floor, and the difficulty and technique are phenomenal.  And considering that she was not known for her showmanship, I believe this was a beautiful selection for her (and you get to see a hint of a smile at the end!)  As you watch and reminisce, I invite you to the discussion: in what regards should we hold Gina Gogean?

Previous The U.S. Championships Preview
Next The List: Significant 4ths