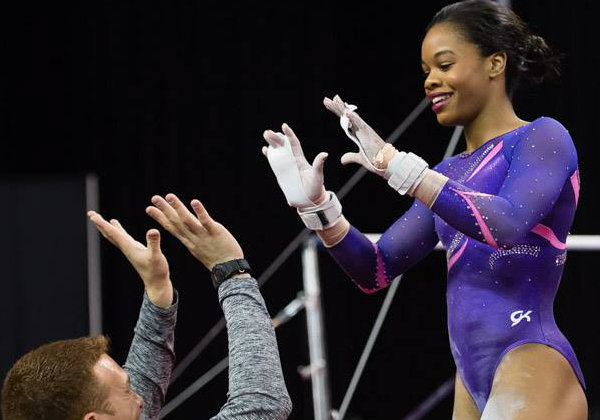 The 2015 U.S. Championships are coming to Indianapolis, Indiana this Thursday through Sunday and after an exciting preview at the U.S. Classic a few weeks ago, it looks like an impossibly stacked field.

Of course, beyond the goal of doing well at this meet, a handful of gymnasts will also be vying for a spot on this year’s World Championships team. This will be their last competitive stop, and although it may feel a bit premature to cast our votes or help Marta make her decisions, I believe a few things are pretty clear…

First, the shoo-in’s, and by that I mean everyone who need not move any mountains at this competition. These are the women who have already proven through longevity, poise, and a successful competitive year that they are ready for Glasgow. No surprise here, they are Simone Biles, Gabrielle Douglas, and Alexandra Raisman**.** Together, they represent a slice of what’s best and most exciting about gymnastics in its present season: an ability to not only deal with the code but work with it, a proclivity towards team spirit, and the proof that maturity has its place even within the U.S. team. Together, they have two of the four events easily covered with scores that can break the 15’s and even 16’s (balance beam and floor exercise) and perhaps with the exception of Raisman on bars, they could easily cover the other two events between the three of them as well. (Theoretically, this means the U.S. could arrive in Glasgow with half of their allotted number and fight for the title.)

This isn’t to say there isn’t room for improvement. Despite their dominance headed into this competition, there will be areas each wishes to improve or capitalize on. I’d watch for the following:

–Alexandra Raisman’s beam routine: At Classics, she wobbled through her switch half and free cartwheel after a solid beginning, including a dynamic BHS to layout to split jump. She’ll want to match the second half of her routine to the first this time around. On floor, watch her second pass, a piked double Arabian to immediate punch front (which she sat down at Classics). It looks as though she may be taking the punch front out for Nationals, but it will still be interesting to see how much momentum she has coming out of that pass. Would it be wise to add it again should she make the team for World’s?

–Simone Biles’ vault: Will she unveil a Cheng? Or a triple-twisting yurchenko? What other dreams and fantasies shall we heap upon her sturdy shoulders?

–Gabrielle Douglas’ increased execution across the board: All-around, Douglass is well poised to be a medal contender, but I’m guessing she wants to prove her event-final readiness as well. In the absence of upgraded routines (a tall order for a three week period between Classics and Nationals), she’ll be looking to eliminate the pickier of the execution deductions (also a tall order because she executed her routines very well at Classics).

People with the most to prove: Bailie Key and Kyla Ross.

Please, don’t get me wrong: this is not a suggestion that these gymnasts haven’t proven their talent and their tenacity. Both Key and Ross are all-around threats and display some of the finest work at the elite level. Despite their talent, however, it’s quite possible that their international opportunities could fall victim to U.S. depth this year. The Texas Dreams progeny Bailie Key is the 2013 Junior U.S. Champion, and she won silver all-around at the recent Jesolo meet in Italy, behind teammate Simone Biles. You would think she’d be part of the “shoo-in” category mentioned above; She fits the pattern that has developed in USA Gymnastics over the last two decades: promising junior turns senior the year before the Games, “bursting onto the scene,” establishing herself as the favorite for Olympic All-Around gold (or at least one of the favorites).

In contrast, Ross turned senior the year of the last Olympics, filling the critical bars-beam role for her team and then reaching more personal success in the following years. Her clean, measured approach to the sport has come through for the U.S. when it wasn’t necessarily expected on more than one occasion. It’s hard to imagine that she wouldn’t be part of a Team USA effort at the World Championships, as she’s been part of every major international effort since 2012.

It’s hard to imagine that either would be left off the team headed to Glasgow, but at present, both will need to prove at these Championships that they fill (or for Kyla, still fill) a vital piece of the team puzzle. In particular, Kyla will need to make the case that she’s a bar specialist, and that means getting through her upgraded routine (watch for her Bhardwaj–a pak with a full). This is especially important when you consider that at this time, she isn’t consistently posting “top-three” scores on any other event.

Bailie, for her part, will need to execute the hell out of almost everything, particularly bars and floor. I think she’ll be vying for the spot that Kyla has filled the last couple of years, albeit with different strengths: the spot that says: No worries, I can cover us on everything.

The Specialty tickets: The sideshow during Classics was the one happening between Brenna Dowell, Madison Kocian, and Ashton Locklear, and it’s likely to go on repeat during Nationals, hopefully with a more fulfilling result for the former. All of these women have the potential to make the U.S. team for bars alone, as it’s the only event where the likely all-arounder’s can’t make up for the cumulative scoring potential of two to three bar workers. It’s a long trip to make for one event, but it wouldn’t be the first time and the math and the puzzle wiggle room is on the specialists’ side.

For those who missed it, Dowell fell on her Maloney at Classics, probably one of the easier elements in a jam-packed routine. If she’s able to increase her stamina and concentration (or whatever the issue was!) and hits at Nationals, she’ll give Marta and company something to talk about.

The Power Events: Another potential sideshow could be the one between Mykayla Skinner and third-year senior Maggie Nichols. I realize I might be stretching a possible storyline, and for the record I think Skinner will be making a second trip to the World Championships, but wouldn’t it spice things up if Nichols gave Skinner a real run for her money? Team USA would be forgoing a potential medal on vault if they went with Nichols, but if they’re tiring of Skinner, Nichols could fill the void team-wise. She had a fantastic meet at Classics, whereas Skinner faltered. It would be a treat to see a fairly experienced “B Team” gymnast rise in the ranks this week, and with another set of commanding performances, Nichols might be the one to do it.

The Gymnasts to look for regardless of World eligibility: With the timing of the meet and so many gymnasts vying for a berth on the Glasgow-bound team, it can be easy to overlook the fact that for most of the participants, this will be the biggest meet of their year, a celebration and a great achievement alone. Although all are deserving of more coverage than they’ll receive, I’d keep an eye out for two athletes in particular: 2014 World Team member (and gold medalist) Alyssa Baumann, and 2015 Pan Am Uneven Bars Champ Rachel Gowey. Although they’re trailing a bit heading into Nationals and even their best may not be enough this time around, we’ll be sure to see some classy gymnastics from both, from Baumann on beam especially and from Gowey on bars.

That’s my take. Who do you think the “shoo-in’s” are? Who has the most to prove?

Previous U.S. Champs: Qualification Results and Highlights
Next In Defense of Gina Gogean