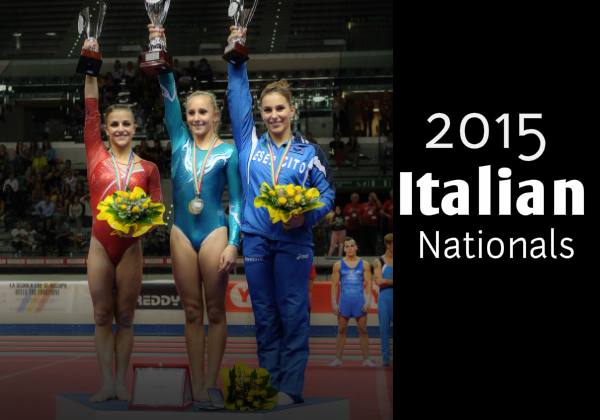 Italian Nationals took place in Turin last weekend (26-26 September). Vanessa Ferrari was absent again due pain on her Achilles tendon, and her participation at the world championships in Glasgow is still in danger.

The overall feeling after this competition wasn’t encouraging for the team since the AA competition was riddled with many mistakes and just 2 top gymnasts didn’t count a fall. If Team Italy wants to qualify for Rio, they need to do much better than this.

Again the bonus system of the Serie A was valid here, so I’ll write the scores without counting it.

Quite surprisingly, Tea Ugrin won the national title giving one of her best performance in the last months. She hit a decent but piked (on the landing) FTY, 13.70, a nice bars routine which includes an inbar stalder, an inbar stalder half and a Geinger(13.85), and a steady beam set, 13.90. Her floor was exquisite as always, with fantastic artistry and carriage, and with good difficulty too, full-in, triple twist, double piked, 14.00.

Elisa Meneghini came in second place with very good performance on 3 apparatus, but a bad one on her usually best event, beam, 12.95. She’s been very inconsistent on this apparatus lately, falling 3 times in 3 competitions, 2 of this on her sidesomi. For a specialist, her D score is quite low considering she rarely gets the 0,1 bonus for the 2 D+A connections she goes for, and the fact she’s not hitting anymore, is upsetting. The Yurchenko 1 ½ on vault was very well done and maybe ready for the DTY upgrade, 14.45, and she also hit her normally weakest event, bars, with one of the cleanest performance she’s ever done, 13.70. I’ll say floor was really great too, with a stuck double layout, full-in, whip+whip+bhs+double back and double piked, for a good 14.05. The only problem she has on this event is the lack of difficulty in the leaps/turns sections, since her highest value there is a C.

The third place went to Erika Fasana, who sadly is suffering a stress fracture on the tibia. She started with a good DTY on vault, 14.70 and hit bars despite some legs issues and a big step on the double layout dismount, 13.90. On beam, her historic bad apparatus, she had a bad routine falling on the dismount, losing all the advantage she had, 12.35. On floor she had a fantastic performance despite a watered down routine due the injury and just performing the easiest passes: double layout, full-in, double piked, 14.00. In my opinion , her biggest problem there is the lack of good flexibility and precision in the landings on all the leaps.** **

Lara Mori was 4th despite being one of the few gymnasts without falls. Her FTY is clean but without much amplitude, 13.65 ,while floor was very energetic and with good landings, but a low d score isn’t helping her reaching higher positions, 14.00. Her bars are steady, even if there’s the risk her double layout dismount will be downgraded to a double piked, 13.70, and despite the fact that her beam is quite lovely and with an original bhs+layout stepout+layout stepout, she tends to have too many pauses that affects the final score, 13.45.

Martina Rizzelli fell on bars, a shocker since she’s been hitting that routine consistently lately, 13.00. The DTY still has some issue, especially with the ugly legs sepations she has on the block, 14.60. Since she’s a 3 event gymnasts and not an AAer, the fact her beam always scores in the mid 12s is not something to think about, meanwhile her floor has become better, with good passes, double layout, full-in, and decent execution, 13.20.

Carlotta Ferlito had a vey bad competition, starting with 2 falls on bars. Literally 2 second after mounting, she fell on a turn, remounted, hit the best handstands I’ve seen her do, all to fall again on the dismount, an arabian double, where you could clearly see she was way too slow, 12.40. The next event, beam , started well, then she landed bad on the switch leap, but decided anyway to go for the back tuck connection, where the results was she had to grab the beam to avoid the fall. All the other skills were quite good until one foot slipped on the dismount and she decided to do a simple layout, losing the requirement and a big part of the D score, 13.10. Carlotta redeemed herself on floor with an entertaining performance which included a full-in, a stuck triple twist, a double piked and a Mustafina turn attempt, 14.10. She ended with a Yurchenko 1 ½ on vault with the usual problems, rotation on the table and bent legs on the landing, 14.20.

Enus Mariani didn’t help her cause with a fall on both beam and bars. In the latter she fell on her first skill, a toe on 1/1 , while she hit all the rest very well, 13.35. On beam Enus had a very shaky routine and fell on the sidesomi, 12.15. The FTY on vault was well done, 13.90, and despite the fact that I love her floor routine, I must admit it’s just too easy to be considered, 13.70.

Giorgia Campana came back from the problem she had and competed on bars, 13.9, and beam, 13.6, performing quite good routines despite the lack of difficulty.

On the junior side, Sofia Busato performed a huge DTY, 14.70, and I think the Amanar is in the work for Rio looking the height and amplitude she gets. On the other 3 apparatus she needs a lot of work in order to be in contention for a spot in the major team, but since she resumed training just a few months ago, she looks very good.

Giada Grisetti, a swiss gymnast who moved to Italy following her coach, is looking very good too. Especially her bars, known for being Italy’s worst apparatus,  received the highest score of the day, 13.95. I’m not sure if Giada wants to compete for Italy or Switzerland, but she can be a great asset to the team.

Sofia Busato decided to give her spot in the final to Martina Rizzelli, who finally won the event with a hit but not so clean routine, 14.25. She needs to clean up her form and not to separate the legs in order to be really competitive on this apparatus. Junior Giada Grisetti hit her good set again, 13.80, to win the silver medal. The bronze went to olympian Giorgia Campana, who proves she’s always reliable on this apparatus. Mori, Ugrin and Meneghini all hit their set, while sadly Enus Mariani fell again on the toe-one 1/1, putting in danger her spot as a specialist on the team for Glasgow.

** **Carlotta Ferlito proved her mistake was just a fluke and that she’s the best beam worker in Italy. Even if she lost 2 tenths in the D score, she performed a great routine for a very good 14.70. Lara Mori won the silver,14.00, proving she’s the most consistent gymnast on the team and that she really wants to be in Glasgow, and Elisa Meneghini has finally hit a set after all the mistakes she has made,13.85. I must say her coaches should work on the composition of her routine since she never gets the switch ring credited, the same for the other connections. A 5.5 D score is not what she has shown in the past. Ugrin had a good 13.90, but since Elisa had a 1 tenth bonus, she came in 4th. Lavinia Marongiu was very shaky, 13.55, Campana, Carofiglio and Grisetti all fell.

If there’s a good apparatus for Italy, this is floor. There’s a huge depth and the second score behind the USA that Italy got at last year’s team final, can be repeated this year. Erika Fasana won the gold with the same downgraded routine she had the day earlier. Good landings and nice leaps gave her a very good 14.35. Elisa Meneghini won another silver medal with another great set, 14.20, and Ferlito completes the podium with a good 14.00. Lara Mori had problems in the landings, 13.45, Enus had just a too easy routine, 13.65, and Tea Ugrin fell, 12.70.

After this competition the choice for the girls going to Glasgow is even more complicated. We don’t know if Vanessa Ferrari is in the right condition to be competitive and Erika is partially injured. Tea Ugrin , who seemed pretty much out of the picture, became national champion claiming a spot for Worlds, but still she’s one inconsistent girl. Lara Mori was steady again, but she doesn’t have a great event. Enus‘s bars can be awesome and a huge asset to the team, but her inconsistency is a big problem and Elisa hasn’t had the best record of hitting beam lately. The Novara cup, a meet with Italy, Romania, Spain and Belgium, will give many answers and a better picture of the chance Italy has to qualify for Rio.