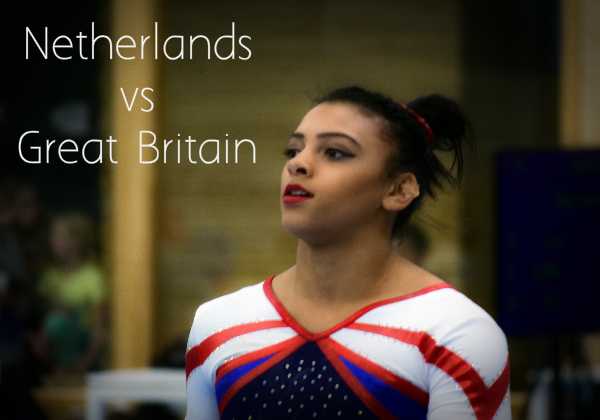 As promised, after yesterday’s photo album, here are some of the impressions of the meet:

The most striking element of the meet was Ellie Downie’s improvement compared to 12 – 18 months ago, and even compared to her bronze winning AA performance at the 2015 Euros. She started off with a solid beam routine – punch front – wolf jump, standing Arabian, double turn switch leap – switch half, leap to side aerial, flick- layout stepout, 2 1/2 to dismount. She only had one balance check (after the side aerial) and received a 14.2 for a routine out of 5.9 D. On floor she hit all her difficult passes – 1 1/2 to double Arabian, double Arabian pike, 2 1/2 to front layout and double pike to finish, and was rewarded with a 14.0/5.8. She also did two vaults – DTY and layout Podkopayeva (with really great form in both) and she receive execution scores of around 9 for both but eventually the 14.85 received for the first vault, the DTY, counted in the all around total. She finished off with a hit dynamic bars routine, perhaps one of her best in international competitions, rewarded with a huge 14.7/6.3.

Amy Tinkler and Kelly Simm placed second and third respectively in the all around ranks. Tinkler was rock solid on the day, especially impressive on floor where she hit a routine which started off with a double-double (14.0/6.1). She received a 13.6 for her beam routine whose highlight was triple full dismount (out of 5.6 D). Kelly Simm’s highlight performance on the day came on bars where she received a 14.25 for a routine out of 6.2 difficulty. She also had strong acro difficulty on floor: DLO, full in, 1 1/2 to double back, double pike to dismount (13.25/5.8).

For the Netherlands, Eythora Thorsdottir had the highest all around score – 53.250. She started off with a disaster on bars after falling twice but then had a much better time on the next events: on beam I loved the first series – leap, side aerial – to a Korbut flip (13.8/5.8), on floor she charmed the audience with a new routine – only two passes double pike and triple full but difficult spins and combinations (double spin with leg up to illusion, duble Y turn triple tun switch ring leap to ring leap) (13.6/5.6). On vault she was very pleased with a hit 1 1/2 Yurchenko.

Lieke Wevers had the second AA score of the Dutch ladies but she really did not seem to be at her best. She hit her vault (FTY) and managed to pull a beautiful floor routine but has a terrible time on bars (13.3/6.0) and on beam (12.7/5.0).

Both teams had overall a bit of an off-day compared to how they would hope to present themselves in a Worlds-qualifications scenario. The Brits had an overall solid beam rotation although there were some mistakes (Fragapane, Simm) but the two Downies and Amy Tinkler showed a lot of confidence. On floor they scored well enough thanks to the performances of Ellie Downie and Amy Tinkler, supported by solid routines from Simm and Harrold, but it made us somewhat worried as both Claudia Fragapane and Becky Downie skipped this event. Will 4 routines (however solid) be enough on Glasgow? But vault looked as the truly troublesome event – Ellie Downie, Amy Tinkler were quite solid but Harrold’s 1 1/2 Yourchenko and Simm’s layout Podkopayeva did not look confident enough. There wee only 4 routines here too. Even with mistakes from Becky Downie (Church release) and Ruby Harrold (dismount), bars was their highest scoring event. I do not believe that these mistakes are anything to worry about as even with this imperfect rotation they still pulled 5 routines that scored around a 14 or higher.

The Dutch ladies started off with a bad bars rotation (Vera van Pol must have been the only gymnasts that stayed on) and did not manage to recover from the utter shock on time for the next event – beam. Here only Eythora delivered. Unfortunately other gymnasts with good scoring potential on the event – Lieke Wevers and Noel van Klaveren had big mistakes in their routines. The floor rotation wen much better though – with the two “ballerinas” (Wevers and Thorsdottir) doing a tremendous job, while the tricksters (van Klaveren, Volleman, Top) also had strong performances (and also had quite good presentation too). The best vault of the team came from Lisa Top – front handspring tuck full (14.25/5.3).

Here are the compete AA results:

And these are the TF results:

Finally, here is a little collage of Lieke’s floor routine