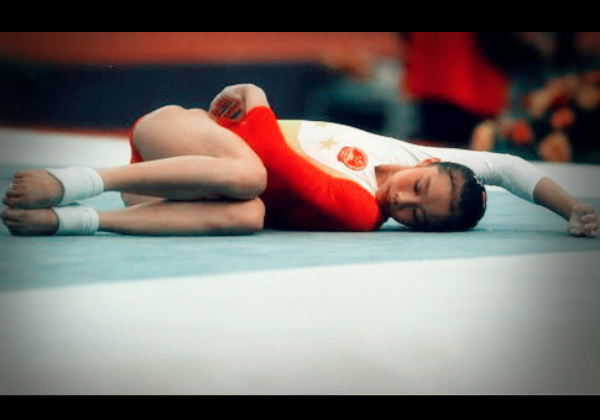 Ling Jie was a bars and beam specialist for China in the late 90s. She turned senior in 1998 and participated at the Goodwill Games in New York; her first major medal came later that year with team gold at the 1998 Asian Games.

In 1999 at the World Championships held at home in Tianjin she contributed with the top scores on bars and beam in the team’s eventual third place finish.  Individually she collected  two medals: on bars she won a bronze medal, behind Svetlana Khokina and Huang Mandan; on beam she won the World Title followed on the podium by Andreea Raducan and Olga Raschoupkina.

A year later at the Olympics in Sydney Ling Jie once again contributed top scores on bars and beam to the team’s third place finish. Individually she won a silver on bars (final won by Khorkina) and placed 7th in the beam final (title won by Liu Xuan). Ten years later Ling Jie would be forced to give up her team bronze medals both from the 1999 World Championships and 2000 Olympics due to the discovery of her teammate Dong Fangxiao being underage.

Later in 2000 at the World Cup Final Ling Jie won medals on her best events: gold on bars and bronze on beam. Her last two major competitions came in 2001 when she competed at the East Asian Games winning team gold and beam silver. She also competed at the Summer Universiade where she won team gold and silver on the uneven bars.

Ling Jie married in 2011 and is a coach in China; one of her most famous pupils was 2013 World Team member Zeng Siqi.

Ling Jie on beam at the Olympics in Sydney