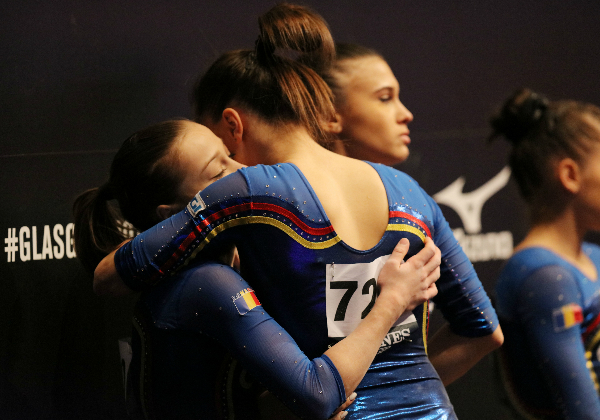 Romania started on floor in the first subdivision of qualifications at the 2015 Worlds. And for about 60% of the competition they seemed that they were find and that they were going to making it though, despite the rotten luck they had after losing both Ponor and Ocolisan to injuries.

Jurca debuted with four stuck passes and a 13.8 (5.7 D), followed by Bulimar (another 13.8/5.8). Larisa Iordache heavily downgraded her routine difficulty – she opened with a full in (instead of the double-double she had stuck in warm-up) and then, despite the fact that there were no visible big errors, everything went downhill – missed the Gomez pirouette, missed the Memmel to Ilusion turn. Her score was a 13.766/5.9.

Silvia Zarzu followed with a very solid routine 13.633. Andreea Iridon was thrown in the mix at the last minute and she looked beautiful but had a fall (12.5). However, the team was not going to count on her score anyway.

On vault there were three DTYs: Jurca had a small step fwd, Iordache a tiny hop and Silivia Zarzu was slightly off direction and had some messy knees. Diana Bulimar did an FTY with the legs slightly apart off the table. But this is nit-picking. It was a solid effort overall.

Bars started with yet another solid routine from Jurca. Her form was picked to pieces by the judges and she just received a 12.933 but the mental game was still fine. And this is where the solid 60% of the meet ended.

Silvia Zarzu was next – she is not training bars consistently so the team had hoped not to use her on this event. But despite the rough execution the team needed her up there after losing Ocolisan to injury less than 24 hours from the start. 11.066 after falling on top of the high bar on a pirouette.

Diana Bulimar who is normally a secure competitor, has been struggling with a Church release since introduced in her routine. She tried to catch this too far from the bar and she came off. Then she came off again, on the Tkachev. Stuck dismount -11.1. Now the team was going to count a score of 11.

Larisa Iordache was up… she had had her own confidence issues since the beginning of the qualifying round. She fell on the Van Leeuwen – 13.2/6.3.

Then it was Iridon’s turn. The series that resulted in the Ricna release had not looked good in training, nor in podium training. She was always losing rhythm somewhere along the way. She couldn’t pull it together today either 11.9.

And after this splat fest the final apparatus was beam.  The team started their warm-up. They looked focused, were still doing a good job at keeping it together. Jurca was up first again. She hit her best routine of the year, hands down (13.833/5.5). Diana Bulimar followed she looked absolutely terrified, barely able to move terrified. She had two big checkes and almost went off on the full turn. But stayed on (13.733). Larisa was next, it was apparent that she was not as clear headed as she would have needed to be in order to hit this final routine. But the team depended on her score, it was her last chance at an event final qualification, she had had so may issues on the day… and Larisa cracked under the immense pressure. Went off on the back tuck full  – 13.866/ 6.2.

Andreea Iridon was up next – she didn’t connect all her planned elements and also had a few small checks, but stayed on, and more importantly hit her double pike dismount – 13.50/5.6. It would have been impossible not to be touched by this final moment, Iridon on the beam, Munteanu and Ocolisan’s tiny voices almost crying, walking her through… .. slowly, be patient, stay calm and then just “breathe… breathe… breathe” until the end of the routine.

Romania ended with a 217.220, the qualification straight to the Olympics is endangered (they would need to finish top 8 here). But this is not the point of this exercise. I saw the looks on the coaches’ faces, the disbelief, the shock, the teary eyes. I heard Larisa speaking to the Romanian television, crying, “we are not trying to find excuses, we will think about what happened, we are responsible for all of it”.

All I wanted to tell them was “breathe”. Yes, I want them to process this and see what needs to be fixed withing themselves. But I would also tell them that they (and the staff present here) are not “the responsible” for this – whatever “this” is, whatever the result.

And a few pictures: