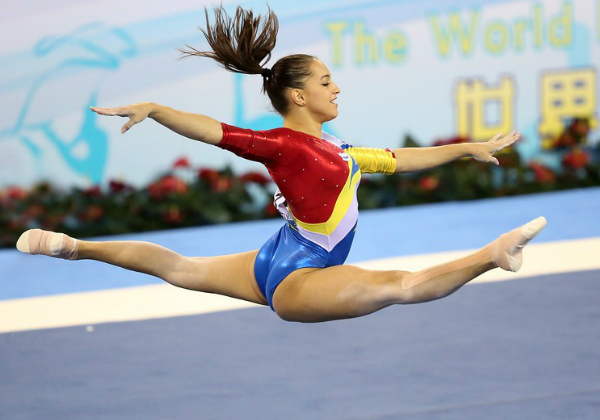 Romania’s growing pains have become apparent for the last year and a half. Have they managed to find the formula for consistency just in time for the biggest competition of 2015?

The center of the team will undoubtedly be Larisa Iordache. But, as we have seen last year after a near-disastrous qualification round, when the team placed 7th, building up depth was the only way to secure a top eight qualification finish and a direct spot at the 2016 Olympics. The gymnasts don’t take their task lightly and they understand that to achieve this, they will need  ” to be a team.. to be strong and … to “be” Romania”… as Diana Bulimar put it after the Glasgow podium training session had ended.

Where they are strongest

Unfortunately for Romania, long gone are the days of three 15+ beam routines. This will still have the potential to be an good rotation for them, but only Larisa Iordache is likely to set herself apart, aiming to manage a routine out of 6.5 difficulty and a mid-15 total score. Joining her in the beam rotation, Diana Bulimar has the ability to break the 14 barrier, while Andreea Iridon, Anamaria Ocolisan and Laura Jurca will likely score in the mid to high 13s.

Floor could go down a similar path in scoring trends – with Iordache being the clear outlier, followed by Bulimar, Jurca and Ocolisan/Zarzu. But overall scoring on this event will be lower for other teams too. So although this rotation will not be the pace to gather the big numbers for the team, it can still be a decent showing, where Romania can place 2nd or 3rd overall.

They also have potential to be the 3rd scoring team on vault. There will be no Amanars, nor Chengs, but four solid DTYs will mean that only the USA and Russia could score higher on this event.

Where they are weakest

** **There is the rotation where they have the potential to being least strong (bars), and there are certain routines/elements that have not looked consistent lately.

After the addition of Jurca and Iridon, new seniors, bars potential has improved slightly, in the sense that the overall  “best scenario numbers” have increased from Iordache’s 14+, followed by three 12.5- 13.00 routines (when hit). Now Iridon can score in the high 13s, Jurca has the potential to get a decent score in the mid 13s, while Anamaria Ocolisan has changed her routine composition and has gained important tenths in both execution and difficulty. Diana Bulimar also has upgraded but her routine has been inconsistent so far – with a Church release as well as the full in dismount giving her headaches lately.

Other weak points will be elements that have been inconsistent in the weeks leading up, or during podium training: Zarzu’s DTY on vault, Iridon’s beam dismount (double pike), Larisa’s Silivas on floor, Laura Jurca’s leaps on BB.

Who could make the All Around or Event Finals

Larisa Iordache will be a lock for the all around final. She is likely to be joined in this stage of the competition by Diana Bulimar.

If Bulimar fails, then Laura Jurca has the potential to follow as Romania’s third all arounder…  Anamaria Ocolisan could also take the opportunity if she hits everything in qualifications.  She is cleaner and has similar difficulty potential, compared to Laura Jurca.

She may have fallen on the double-double in podium training, she may have been away for most of the season, but Larisa Iordache is looking strong as she already matched her 2014 Worlds AA total at the recent test against Italy, Spain and Belgium (59.75 at Novara Cup). She will again carry the team to a top eight finish in qualifications, and could also secure a new AA medal.

An event final medal on one of her favorite events, beam and floor, is also a strong possibilities. _Will this be her year on balance beam? _

It will be tough for the team to go 12/12 in the final, but if it happens then I would not be surprised for them to be very close to the podium again (they were 0.5 behind 3rd place Russia last year).

And now, a look at some of the podium training routines: