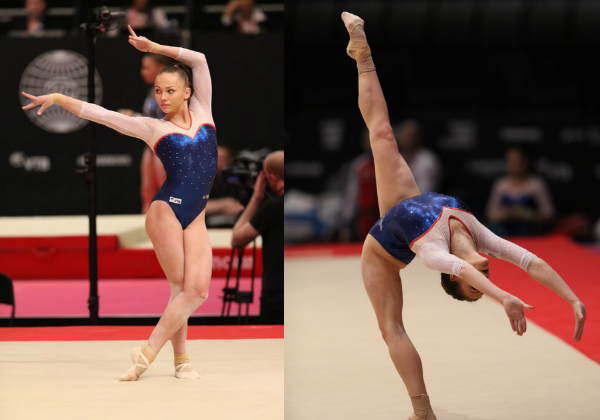 Great Britain started their evolution on balance beam with four hit routines, from Harrold, Ellie Downie, Amy Tinckler. Rebecca Downie had the highlight routine of this rotation for team GB. Although she started off with a couple of tiny wobbles, she gained confidence thoughout and hit a routine composed off side aerial-flick, Y turn, switch ring, double pike dismount (14.1/5.6) [watch here].  Only Claudia Fragapane had a fall in her routine (on a standing full)  her routine was going well up to that point – back tuck, flick- flick – layout to two feet, switch leap-sheep jump.

Then the team moved on to the floor and hit four super-entertaining routines. There were a few bent knees and flexed feet here and there but the performance value was there, as were the big skills: E Downie had a double arabian tuck and a double arabian  a pike, Tinkler had a routine with double double and DLO, while Simm had a dlo and a whip to full in. Fragapane reserved her spot in the final showing again the same time of performance she was managing in the first half of 2014: full in stretched, double arabian, triple twist, DLO (14.6/6.3). [watch here]

Vault was another mssive event for GB: Kelli Simm’s pike Podkopayeva and then the four DTYs, from Harrold, Fragapane, Amy Tinkler and E Downie, all scored very well. Ellie Downie did a second vault – Pike Podkopayeva and she is right up there at the top of the ranks with an average of 14.949 and will probably qualify for the final.

Bars where the drama happened for team GB. It was not big drama, though. Tinker and Simm started off with confident executions. E Downie was up next but she lost concentration at the beginning of the routine and stepped down. Ruby Harrold hit her usual routine which (and difficulty) for a score of 14.666/6.3 [watch here]. Becky Downie, up last, could not contain her emotions on her favorite routine, in front of her home audience and fell on a release (pike Tkachev) she was tentative throughout, always catching the bar too closely almost smashing her wrists so it was all because of the fear of failure [watch here]. GB will probably make it through to the team final from the fourth place, Tinkler and Harrold have the top two AA spots (E Downie was only third). They will also likely have a gymnast in each of the four finals: Harrold is in contention for bars final, Downie for vault, R Downie for beam and C Fragapane for floor.

In the same subdivision Brazil managed to improve on last year’s team total by around nine points. They start on floor with solid routines from Daniele Hypolito, Lorrane Oliveira and Jade Barbosa. Flavia Saraiva’s floor was the highlight of the rotation for them 14.166/5.6. On vault Jade Barbosa and L Oliveira did DTYs while Hypolito and Saraiva had easier vaults –  Y 1 1/2 and FTY. On bars, Lorrane Oliverira had the best routine with a 13.6/5.8. On beam Barsbosa and Saraiva were excelent (14.2 and 14.133 respectively). Their team total was 221.861.

Russia started off on their weakest event (or the event with the lowest scoring potential). Tutkhalyan, Spiridonova Kharenkova had quite weak evolutions with tons of shaky landings but they looked polished and graceful in their dance. Paseka managed to pull off a good routine, even if of lower difficulty (13.666/5.4). Afanasyeva looked at her best. It is difficult to comment on the music and choreo, although I should mention that I definitely liked her performance on the day, 14.633/6.1 [watch here]

On vault, Paseka did her thing with a stuck Cheng (messy flight though) and a good fully turned on landing Amanar. Spiridonova, competing for an AA spot hit her FTY, Komova in her first evolution at Worlds since 2011, hit her DTY, while Tutkhalyan did a DTY and a layout Podkopayeva.

Bars was a wonderful event for the Russians with Kharenkova’s 14.341/5.8 being the lowest score counting for the team ( with this she is still sitting on 8th place on the event after 7 subdivisions!). Of course the highlights were Spiridonova (15.466/6.7) and Komova (15.300). Spiridonova was flawless while Komova not so much, having to adjust her routine right at the end and improvise a little. She managed the crisis very well though.

Only 4 routines were posted on beam: Spiridonova was shaky and had low difficulty for 13.1/5.6. Tutkhalyan, Kharenkova and Komova all broke into the low to mid 14’s with a range of difficulties and routine compositions. I preferred Kharenkova but Tutlkalyan earned the hearts of the judges by staying on on the layout full (14.533/6.3). Komova almost went off on the L turn but quickly recovered and hit the rest of the routine – punch front, flick – layout stepout, standing arabian, side somi, double tuck dismount.

Italy were very solid throughout. They started with four solid bars rouines from Ferlito, Ferrari, Fasana and Ugrin, while Mori’s was discarded.On beam they were extremely consistent – three scores of 13.733, for Ferrari, Mori and Ugrin. While Ferlito confirmed the good shape she’s shown all season with a very solid execution with 0 wobbles – 14.233. On floor, Fasana hit her routine and will probably qualify for the final (14.466/6.0.Fasana was also the highest scorer on vault (DTY – 15.058), foolwoed by Meneghini’s Y 1 1/2 14.6/6.3

Here are the intermediate all around and team results:

Here are some pictures: