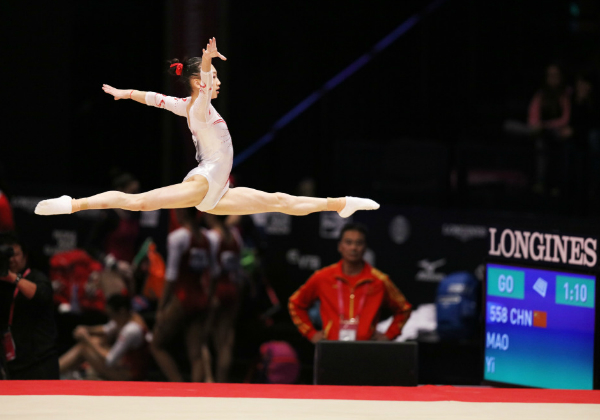 China, starting their competition in the first subdivision of the second day had a rough meet overall. It was not a complete disaster so they will have the chance to make up for the misses in the team final, but it was enough to have them qualify for the TF behind Great Britain.

A they had a couple of falls on the floor, event where they already struggle with putting together difficulty, so Mao and Tan scored in the 12s. Vault was a well scoring event with Wang’s double twisting Tsukahara being the only one that broke the 15′ barrier.

Chen, Tan and Wang all faltered on bars, with scores ranging from 11.8 to 13.66. Only Shang Chunsong and Fan Yilin managing to stay on. They bot are still in an event final qualifying position. A 56.0 total after all the falls is still an honorable 2nd place (intermediate) behind Russia, but so much less compared with what they could have done.

Beam too, was beautiful but way too shaky – Chen opening was good, a 13.7/5.6 for a routine with round off  layout, punch front, switch ring wobble, side aerial, aerial walkover to sheep wobble, double back tuck small step.

Fan Yilin received 13.833/6.1 after a fall on round-off  – layout, good switch ring leap, aerial walkover to sheep jump, switch leap to side aerial, 2 1/2 to dismount. Shang Chusong didn’t look like herself after a 13.166/6.1 bhs- bhs-layout to two feet, switch leap half, flick – layout – layout off direction and a fall, double turn wobble – triple full to dismount. Wang Yan hit Barani right off the bat, fought to stay on after the round-off layout (and managed to), punch front and triple full dismount.14.5/6.3