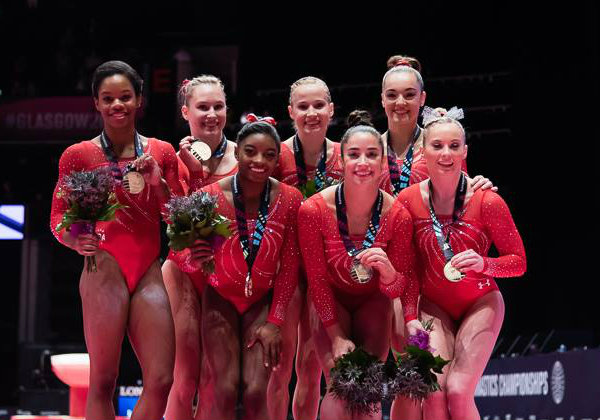 Meeting and even exceeding expectations after a “rougher than usual” qualification round, the U.S. women claimed team gold in Glasgow on Tuesday. With a total score of 181.338 and only five women competing, they improved upon their 2014 result and retained the position they’ve held since the 2011 World Championships. Their highest collective score was posted on vault, followed by floor exercise, uneven bars, and balance beam.

Their effort began on their biggest piece, where one solid Amanar (Maggie Nichols, 15.466), one huge Amanar (Simone Biles, 15.966) and one very clean and stuck DTY (Gabby Douglas, 15.233) set the stage for another dominating performance. On bars, the momentum continued with one of the best collective performances the U.S. has given on this event. Maggie Nichols got things rolling with a 14.800 (and a stuck DLO dismount), and Gabby Douglas gave a commanding performance for a 15.333. Her sky-high piked Tkatchev painted familiar shades of Olympic brilliance. And anchoring the team on this event, her only contribution for the evening, outlier Madison Kocian gave a considerably different (read: Russian) though comparably lovely routine for a 15.300. She wasn’t quite as clean as usual and was a little off on her pirouette, but her Komova and Van Leeuwen transitions were beautiful and consistent. With her as anchor and Douglas back in action, the U.S. is on its way to breaking the bar mediocrity.

While beam proved to be the lowest scoring event of the night, it was far from a poor rotation and went much better than it did during qualifications or even in the domestic meets leading up to these World Championships. Alexandra Raisman counted a big shuffle on her layout, Maggie Nichols apparently had to save to side somi, and even Simone Biles counted some ever-so-slight checks, but overall they got through the rotation thoroughly in control. All that was left was floor, another final rotation where someone could probably afford to melt down. That didn’t happen, of course, and after a three dizzying performances of stuck full-in’s and double everything, the U.S. clenched what was only theirs to lose.

Claiming silver, Team China dramatically improved upon their disappointing qualification round. Ending their competition with a total score of 176.164, they appeared to be a totally different team, one that had found its nerve. Not surprisingly, their strongest event was uneven bars, which is where they began. Right from veteran Shang Chunsong’s Shaposhnikova to Gienger, it was clear (at least to me) that she (and they) were “on.” Her 15.233 was followed by a 15.266 and a 15. 133 from teammate’s Yilin and Jiaxin after comparably flighty transitions and lovely pirouette work. The only blip came on Yilin’s dead-hang after her Geinger, but it didn’t phase her and she was able to muscle through.

China put up her worst collective score on balance beam after counting a fall from Wang Yan. She saved her Barani and round-off to layout but the front tuck finally got the best of her anxiety. Teammates Fan Yilin and Shang Chunsong posted solid scores after lovely routines, however, a 14.400 and a 14.600, respectively. On floor, standout performances came from Chunsong, Wang, and Mao, all scoring over 14.000. The same standard was set and met on vault, where the tiny Wang, Mao, and Tan executed one double-twisitng Tsuk and two big DTY’s to clench a silver medal that seemed very much out of reach just days ago.

Claiming bronze, Great Britain arguably gave the most exciting performance of this competition, and that in the company of a dynamic U.S. performance and redemptive Chinese one. After watching their talent and hope arise over the last several years, there was something downright sob-worthy about this historic podium finish. It was the kind of goose-bumpy performance that makes you fall in love with a team. One thing is for sure: they can no longer be dismissed as “only competitive on the regional level,” and that’s not only good for Team GB, it’s good for the sport.

Beginning on uneven bars, Ellie Downie caught her Tkatchev too close, peeling off the bar and eliciting what felt like a collective sigh from the gymternet. Had the ghosts of qualifications followed them here? Would this not be the year after all? She was visibly shaken, but beautiful routines from her teammates–in the best tradition of the British — meant leaving that first rotation with confidence that was intact. Elder sister Downie found her rhythm again, scoring a 14.833 (and this after giving little sis a pep talk!) and the amazing Ruby Harrold scored a 14.433. Moving onto balance beam, historically a problematic event for them, the ladies kept the momentum going, guiding Ellie Downie through a slightly tentative but dynamic set, including a massive standing Arabian and 2.5 twist dismount with an “Aliya stick.” Her 14.133 was joined by two 13.800’s from sister Rebecca and teammate Claudia Fragapane.

Their worst rotation mercifully conquered and out of the way, there were only two rotations left and they certainly showed ’em who was boss. With three floor scores that broke the 14’s, including a 14.733 for Claudia Fragapane (full twisting DLO, Double Arabian, triple twist, DLO), and three massive DTY’s, the power ladies (Downie, Fragapane, and Tinkler) closed Team GB’s competition with a bang. And then tears. For everyone.

If the gold, silver, and bronze medalists exceeded expectations, it was Team Russia that failed to meet them. Heading into this competition they were embattled with health problems and the absence of their long-time leader. After the Russian Cup there were urgent questions about their competition preparedness and mental game. They appeared to be setting their expectations rather low.

However, following their dynamic showing at qualifications, they appeared not only amusingly great when compared to the ominous forecasts, but solidly silver. It wasn’t even naïve to imagine that come Rio, they might be within striking distance of the USA. (A long shot, yes, but not impossible, which is saying a lot these days.)

Despite my elation for the British women, watching this fall from grace was difficult. Russian fan or not, you had to be disappointed for them.

Also beginning their evening on vault, they almost matched the performance given in London. Instead of one solid Amanar, one scary one, and one great DTY, however, they performed two solid DTY’s (Komova, 15.100, and Afanasyeva, 15.066) and one great Amanar (Paseka, 15.600). If the expectation was a collective performance that threatened U.S. dominance on the event, then this wasn’t a winning combination, but if it was good and safe vaulting that set them up well for the rest of the competition, then it was.

Building upon their confident vault performance, Maria Paseka and Daria Spirdonova executed very commendable bar routines, a 14.733 for the sturdy-as-ever Paseka and a 15.141 for the lovely Spiridonova. Turning the page on this hopeful beginning, however, Viktoria Komova executed a splendid routine until losing it on her full pirouette. She came off the high bar and set in motion a contagion that would continue right on through the next rotation—a fall for Thutkhalyan on her double pike beam dismount, a fall for Kharenkova on her L turn, and—bringing it full circle—another fall for Komova on her standing Arabian. Even a relatively solid floor rotation (including a 14.500 from Afanasyeva) wasn’t enough to buffer the mega meltdown in the middle of the meet. Russia would not climb the podium at these championships. It was time to go home, pay people to fill the Burtasy Palace in Penza, and do pressure sets.

There’s much more to say, not the least of which were the game-changing performances given by Japan, Canada, Italy, and the Netherlands, but that will have to wait for another day and a chance for all of the videos to surface.

Suffice it to say that this was truly one of the more exciting Team Final’s of this Olympic Cycle. There was the thrill of victory (for all of the podium-finishers!) and the agony of defeat; there was the delightful surprise and the bitter frustration. I also think it’s safe to say that despite great performances, every team could have done a little (if not a lot) better, and that’s exciting as we move closer Rio.

But first, a few more days of competition in Glasgow…

Previous Photo: 2015 Worlds Team Final
Next Dutchies through the front door to RIO!